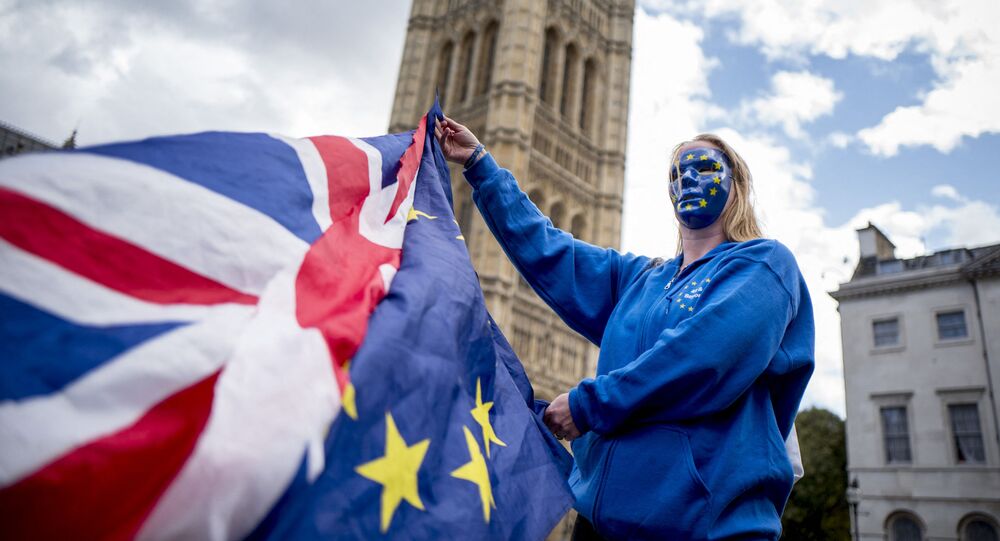 In April, Northern Ireland plunged into violent tensions as loyalists expressed anger over post-Brexit arrangements and custom checks on goods that were seen as dragging the province further away from the rest of the UK.

Irish Foreign Minister Simon Coveney has lashed out at David Frost over the Brexit minister's recent article on the Northern Ireland Protocol (NIP), part of the Brexit divorce deal aimed at avoiding a hard border with the Republic of Ireland.

In an interview with the Irish news network RTE on Sunday, Coveney described the article as "a very strange way to make friends and build partnerships".

The piece, which was written by Frost along with Northern Ireland Secretary Brandon Lewis for The Irish Times on Saturday, came after the EU and the UK agreed to extend the deadline last Wednesday over the sale of British sausages and chilled meats.

"Many in the EU are interpreting the UK's response as essentially saying: 'Look, concessions don't matter. What is required now is to dismantle elements of the protocol piece by piece'", Coveney said referring to the article, and adding, "that is going to cause huge problems".

The Irish foreign minister called the EU "the only side that has shown flexibility" in the so-called "sausage row", claiming that "the contribution from the British government isn't helping that [peace and stability], because every time Lord Frost or the secretary of state for Northern Ireland says the [NI] protocol is not sustainable, that reinforces in the minds of many people who are concerned and frustrated by the protocol, that the protocol needs to change".

"Instead what needs to happen here is that the EU and the UK have got to work in partnership", Coveney underscored.

He spoke after Frost and Lewis insisted that the sides "must find a new balance in how [the] NI protocol is operated".

In the article, the two argued Wednesday's deal was "welcome" but that it addressed "only a small part of the underlying problem". They asserted that the "process to resolve all these difficulties" was "creating a series of rolling crises as we lurch from one deadline to another".

The ministers called for "constructive and ambitious discussions with the EU which deal with the actual reality".

"To simply say 'the [NI] protocol must be implemented in full' is to take a theological approach that is frozen in time and does not deal with the reality that now exists. If operating the protocol on the current basis is making the situation worse, then how can pressing for an even more rigorous assertion of it make sense? Can it be right that the commitments made in the protocol to protecting the Belfast Agreement and preventing disruption and economic harm are deemed less important than those designed to protect the single market?", the piece noted.

According to The Telegraph, when UK Prime Minister Boris Johnson met Macron on the sidelines of the Group of Seven summit in Cornwall in mid-June, he tried to explain to his guest his frustration with the NIP by asking him what he would do if sausages from Toulouse could not be moved to Paris.

The French president reportedly told Johnson that such a comparison wasn't relevant because Paris and Toulouse were both part of the same country, suggesting that Northern Ireland is not within the UK.

© AFP 2021 / LUDOVIC MARIN
Sausage Wars: Johnson 'Infuriated' After Macron Suggests Northern Ireland is Not Part of UK
Although there is no hard border between Northern Ireland and the Republic of Ireland, all goods and animal-based products coming from the rest of the UK must be checked upon arrival in Northern Ireland to comply with the EU's sanitary regulations, leading to delays in the arrival of products and protests by unionists loyal to London.

The UK government unilaterally pushed back the full implementation of checks on supermarket goods and parcels to prevent shortages of chilled meat products in Northern Ireland due to delays caused by the customs checks and paperwork, but the EU claimed that such a move is undermining the NIP and has repeatedly threatened London with legal action.