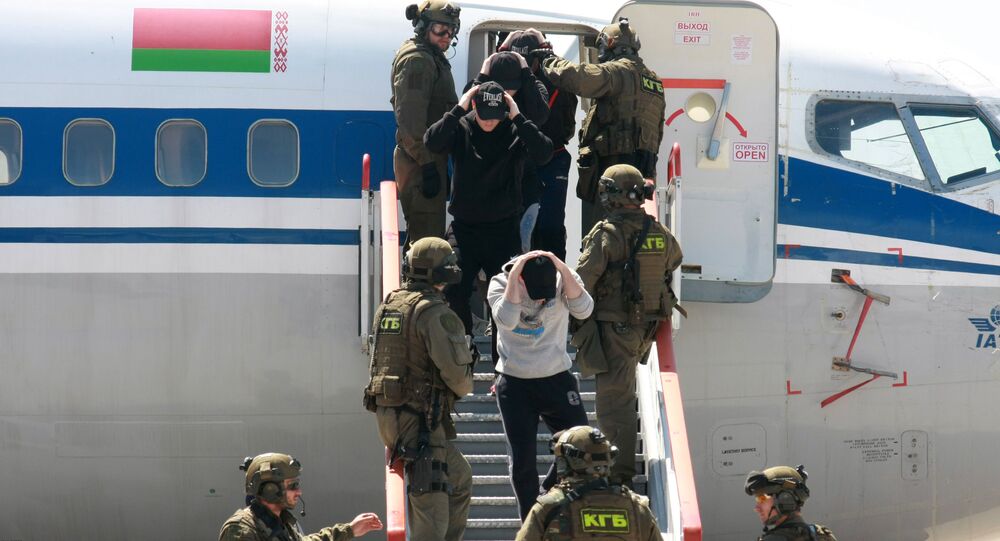 Germany has helped lead the charge in a European Union-wide effort to pressure Belarus via sanctions and other restrictions, with tensions between Minsk and Berlin escalating dramatically following last year’s presidential elections, in the aftermath of which Belarusian authorities have accused Western countries of trying to stage a “coup.”

Belarusian President Alexander Lukasehnko announced on Friday that the country’s security forces had uncovered a large-scale terror plot with links to Western handlers after a sweeping counterintelligence and counterterrorism operation, and vowed to ask German Chancellor Angela Merkel for answers over the provocation.

“After wrapping up counterintelligence activities today, we will raise questions not with some Heiko Maas, the German foreign minister, but to the chancellor herself and some other top officials of Germany,” Lukashenko said, speaking at a state award ceremony in Minsk.

The president reported that Belarusian security services had uncovered a network of terrorist sleeper cells calling themselves “self defence units,” with their goal said to be the violent overthrow of the government at some unspecified date.

Lukashenko alleged that Lithuania, Poland, the United States, Ukraine, and Germany are involved in the plot, with a “combat reserve” of 2,500 individuals said to have participated in a Telegram channel called "Belarusian Self-Defence Units."

“This is their combat reserve. We know them by sight. And, importantly: the owner of this chat is a German national, a Mr. de Hoffman, a former citizen of Russia and Ukraine,” Lukashenko said.

The Belarusian leader accused this group of plotting to destroy logging equipment in forestry enterprises, with the volunteer leading this campaign said to have been intercepted and captured by Belarus’ elite KGB Alpha Group law enforcement units, with details on that incident to be provided in the near future.

© REUTERS / MAXIM GUCHEK/BELTA
US Working With Allies to Introduce Sanctions Against Key Belarusian Officials, Psaki Says
Lukashenko further said that these underground forces sought to sabotage the Russian Navy communications centre in Vileyka, northwestern Belarus, which links Russian Navy headquarters and nuclear submarines on duty in the Atlantic. The Belarusian leader said he discussed the issue during his recent telephone talks with Russian President Vladimir Putin, and provided few details, except to say that “all participants in this terrorist act, including those working to organise and carry it out, were found and arrested in the space of two days.”

The German Foreign Office has declined to comment on Lukashenko’s remarks and his allegations about terror sleeper cells, with ministry spokeswoman Andrea Sasse telling reporters that “Lukashenko just spoke his mind. We have nothing to add to this.”

The US and its European allies levied several rounds of sanctions against Belarus over the past ten months, and issued additional restrictions following the detention of opposition journalist Roman Protasevich during a flight from Athens to Vilnius on late May.

Before that, in April 2021, Lukashenko revealed that Belarusian security forces had detained a group of people allegedly plotting his assassination, and claimed that the US State Department had backed the conspirators. A State Department spokesperson denied the allegations. The same month, Russia’s FSB internal security service reported that it had detained two members of the Belarusian opposition for plotting to stage an armed coup against Lukashenko, with the plot’s end goal reportedly including the abolition of the presidency and putting a "national reconciliation commission" in charge of the country.