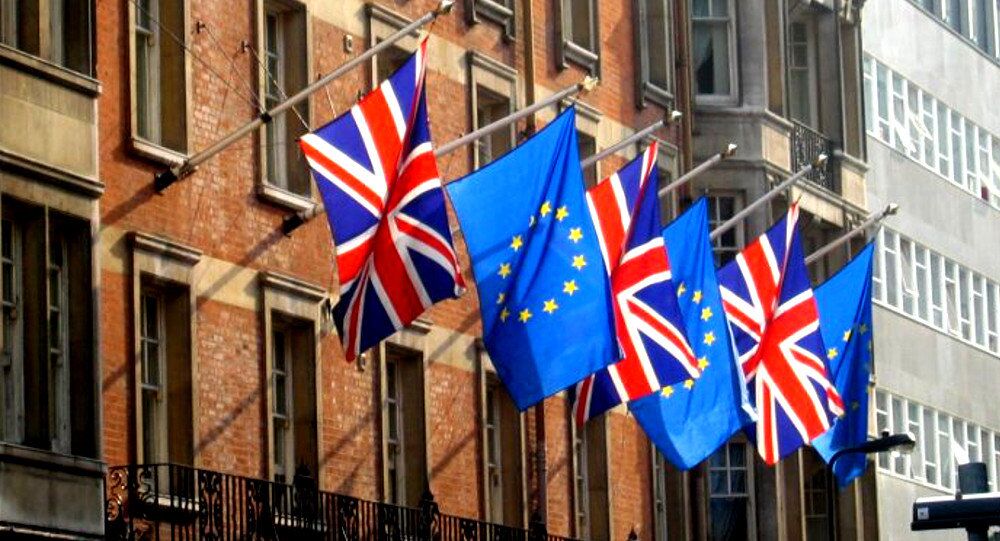 In an attempt to resolve the post-Brexit trade dispute with the European Union (EU) over the Northern Ireland Protocol, which has been dubbed the “sausage war”, the UK has applied for an extension to a grace period allowing chilled meats to continue being shipped from Great Britain to Northern Ireland after the end of June.

Brexit Minister David Frost has weighed in on the current tensions straining the UK’s relations with the European Union (EU), partly over the contentious issue of the Northern Ireland Protocol.

The cabinet minister suggested that the deterioration in UK-EU ties amid the so-called “sausage” war trade dispute has come as a surprise to Vote Leave campaigners who had argued the case for a divorce from the bloc five years ago.

“It is absolutely not part of the plan to be bickering with the EU and hope it isn’t part of their long-term plan either,” he said in a Thursday interview for thinktank UK in a Changing Europe to mark the fifth anniversary of the EU referendum.

.@DavidGHFrost: “It is obvious, that there’s a, I would say, pretty low cost to leaving the Customs Union and it is outweighed by the ability to control your own terms of trade and your own legislation. I believe that to be true.”#EURef5yrsOn https://t.co/bhYbAakj92 pic.twitter.com/Xo6vEBWqpi

David Frost stated that the campaigners to sever ties with the European Union had dreamed of a sovereign Britain, which could, nevertheless, maintain friendly relations with its neighbours. The minister acknowledged that this would only happen if post-Brexit tensions over Northern Ireland were sorted out.

“Until we have settled the Northern Ireland issue and put in place new balances, or the right balance, I think it’s going to be difficult to get relations on to the right footing that we want, but we absolutely do want that,” he said.

Lord Frost also admitted that campaigners for Vote Leave had not entirely anticipated the fallout from the nation’s exit from the European bloc regarding ties with “our friends and neighbours”.

“I don’t think those who campaigned five years ago for Brexit drove the analysis, drove the politics of it. I think they are surprised, quite often, to find relations are in the state they’re in,” said Frost.

Regarding the Northern Ireland Protocol, part of the Brexit divorce deal aimed at avoiding a hard border with Ireland, and its impact on movement of goods, David Frost intimated the government of Prime Minister Boris Johnson had “underestimated” it.

“I don’t see what is wrong with learning from experience. This is a very unusual agreement and we’ve learned a lot about how economic actors behave … we underestimated the chilling effect.”

As part of the withdrawal agreement, Northern Ireland remained in the European single market and customs unions after the United Kingdom left the EU on 31 December 2020. While there is no hard border between Northern Ireland and the Republic of Ireland, all goods and animal-based products coming from elsewhere in the UK must be checked upon arrival in Northern Ireland to comply with EU sanitary regulations.

As inspections take place at Northern Ireland ports, and customs documents have to be filled in, this has prompted criticism that a new border has effectively been created in the Irish Sea.

Both sides have agreed on a six-month grace period, which has been in place since January, temporarily suspending the rules of the NIP, including the rule on the deliveries of chilled meat to Northern Ireland.

After the UK voiced its intention to renegotiate the NIP, the bloc opposed the idea. Amid the ensuing deadlock in negotiations, Brussels warned that it could respond with legal action against Britain if it failed to honour the original deal.

David Frost was speaking as the UK anticipated that Brussels, in a sign of concession, would agree to an extra three months grace period to resolve the dispute over Brexit checks in Northern Ireland including those on chilled meats, nicknamed the “sausage” war.

The Environment Secretary George Eustice said there are “positive indications” that an agreement may be reached in the trade dispute with the European Union (EU) over the Northern Ireland Protocol.
Eustice told LBC Radio on Thursday:

“I think we are getting some positive indications and it’s always our view that it’s better if we can reach agreement with the European Union on these things.”

The Tory peer also believed that the UK had experienced “loss of will” after decades within the EU, subordinate to the “centralisation of laws”.

Thanks to all who joined our in conversation event with @DavidGHFrost this evening.

If you missed it, you can watch it back here👇https://t.co/Xdp6GdoX0U#EURef5yrsOn

The country had “got used to not devising for ourselves” and “got lost in a mushy multilateralism” rather than “think about outcomes”, said Frost.

Looking ahead, Lord Frost said he hoped to witness a world in which “we’ve settled into a more normal relationship with the EU … one where we have gone our own way in a number of areas and succeeded … nobody is questioning Brexit. It was self-evidently the right thing to do.”