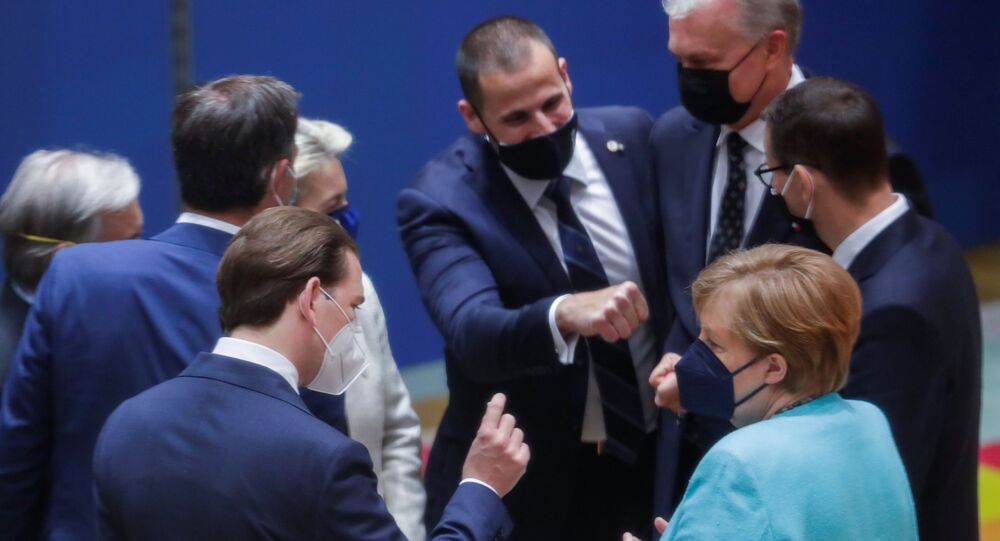 On Wednesday, the Financial Times reported, citing diplomatic sources, that Merkel and Macron wanted the European Union to consider inviting Russian President Vladimir Putin to a summit of European leaders. Germany and France have also reportedly called for the development of a new EU strategy for closer engagement with Russia to develop discussions with Moscow after the Russian-US summit in Geneva.

According to Bloomberg’s source, some 10 countries feel uncomfortable either with the idea itself or with the fact it was put on the agenda of the current meeting at the last minute.

A draft document of the current EU Summit says that the EU leaders “will review the existing formats of dialogue with Russia, including at leaders’ level,” but this phrase is in square brackets, which means that the text has not been agreed on yet.

According to the final document of the first day of the EU Summit, leaders of the EU member states tasked the European Commission's foreign policy chief Josep Borrell to develop initiatives on ways of building further cooperation with Russia.

“The European Council reiterates the European Union’s openness to a selective engagement with Russia in areas of EU interest,” the document said.

In particular, cooperation with Moscow has been proposed in the fields of climate change and environment, health care, certain foreign policy issues, including the Iranian nuclear deal and the conflicts in Syria and Libya.

However, some leaders of the bloc's member states expressed their wish for the EU Commission to propose measures, including economic sanctions, in response to possible "unfriendly steps" by Moscow.

“Regarding the strengthening of our resilience, the European Council stresses the need for a firm and coordinated response by the EU and its Member States to any further malign, illegal and disruptive activity by Russia, making full use of all instruments at the EU’s disposal, and ensuring coordination with partners. To this end, the European Council invites the Commission and the High Representative to present options for additional measures including economic sanctions,” the document said.

© REUTERS / POOL
France's Macron Says EU-Russia Dialogue Is Necessary for European Stability
Moreover, Merkel reportedly said no consensus on the EU-Russia summit has been reached yet, calling on leaders of the EU member states to show more bravery concerning the initiative to hold the summit. The German chancellor also described the talks on the issue as difficult ones.

Earlier in the day, French President Emmanuel Macron stated that a dialogue between the EU and Russia is necessary to defend the bloc's stability and interests, calling it the "right way to move forward" with bilateral relations.