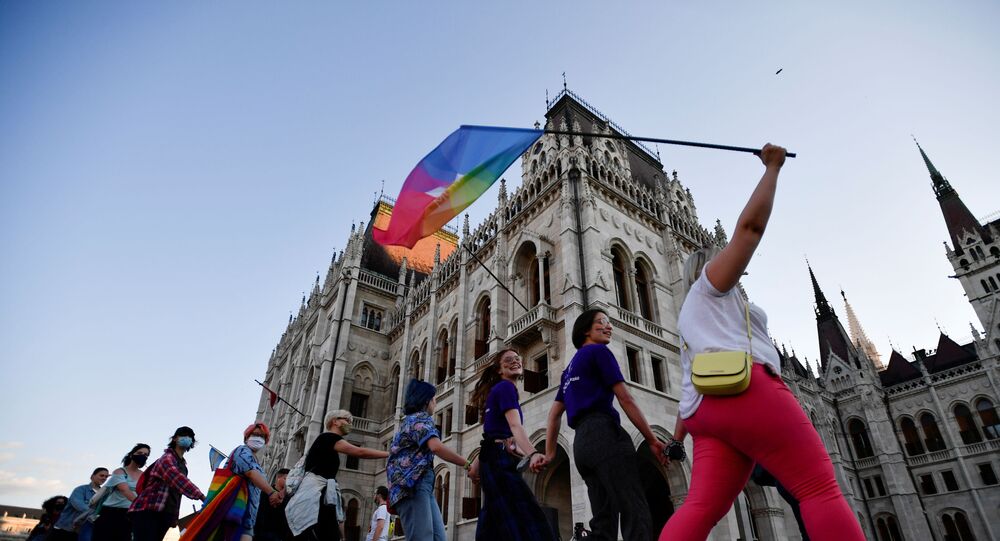 The legislation, prohibiting the "promotion" of homosexuality or gender reassignment, prompted criticism from many pro-LGBTQ organisations in the country and across the European Union.

The Hungarian parliament on Tuesday voted to approve legislation that would ban the dissemination of content deemed as "promoting" homosexuality and gender change among those under 18.

"In order to ensure... the protection of children's rights, pornography and content that depicts sexuality for its own purposes or that promotes deviation from gender identity, gender reassignment and homosexuality shall not be made available to persons under the age of 18," said the legislation, cited by AFP.

The document also highlighted that the listed health and biological subjects must not be "promoted" in sex education.

The legislation was introduced by Fidesz, the conservative ruling party of the Hungarian prime minister, Viktor Orban, with Hungary's National Assembly passing it in a 157-1 vote. The opposition reportedly boycotted the vote.

According to a Fidesz press release issued after the vote, the legislation "protects the right of children to self-identity according to their gender in the child protection system." The bill also targets pedophile crime and child pornography, to "prevent pedophiles from filling jobs where they can meet children."

The passage of the bill caused an uproar among LGBTQ+ activists and others in the country and from the European Union. The streets of the Hungarian capital, Budapest, reportedly saw thousands protest the new legislation.

1000s gathering in front of #Hungary parliament protesting the anti-LGBT bill equating sexual and gender diversity with pedophilia. One sign reads “Can our child look at us?” #LGBT pic.twitter.com/YPAJTM9r1f

​The mayor of Budapest, Gergely Karacsony, voiced his condemnation of the new legislation.

"On this shameful day, the opposition's place is not in the parliament but on the streets", he wrote on his Facebook page. "We have to answer the important question, perhaps the most important thing: who, what endangers our children? We think it's not Harry Potter movie on TV before ten pm, it's the government that will endanger our children that will reveal their future", he added, referring to how some movies, including "Harry Potter" or "Billy Elliot", are deemed by the ruling party as promoting homosexuality, and can only be shown at night, with a 18+ classification, due to the new bill, according to broadcaster RTL Klub Hungary.

European Commissioner for Equality Helena Dalli said, cited by AFP, that Brussels is prepared to take measures if the bill becomes law.

"The message is that if you don't uphold the values of democracy or equality of the European Union, you are not entitled to take money for your project," she observed.

In its move against what it characterized as "promoting homosexuality" Fidesz appears to not be alone, with some politicians in Poland recently declaring certain regions as "LGBT-free zones", prohibiting pride marches and any display or celebration of LGBTQ activities of lifestyle within their borders.