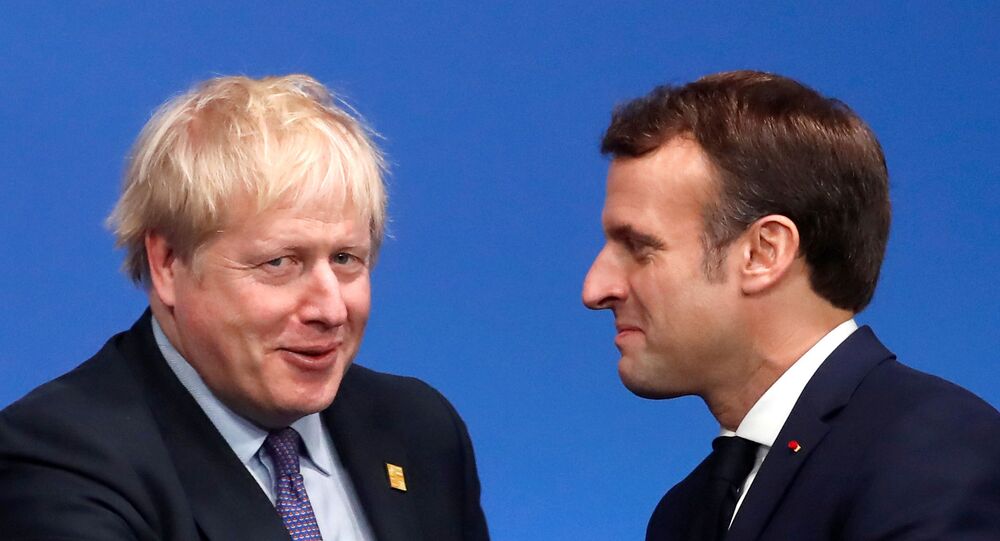 The incident occurred as tensions were running high between Paris and London over the ongoing Brexit row and Northern Ireland's status regarding Great Britain and the Irish Republic particularly after the French leader suggested that the province is no longer a part of the United Kingdom.

UK Prime Minister Boris Johnson had a dig at the French President, Emmanuel Macron, during the last day of the G7 summit, the Sun reported. According to the newspaper, opening the final session he told his counterparts that he felt a "little heavy-headed" after the barbecue the leaders enjoyed the night before.

Johnson reportedly blamed his condition on the expensive red wine French President Emmanuel Macron brought as a present for US President Joe Biden and which the Democrat generously left to the rest of the G7 leaders as he went to bed early.

"[The wine] was as old as when the French last won a naval battle," Boris Johnson told G7 leaders according to the Sun.

The United Kingdom and France have fought numerous wars and the French suffered several significant defeats at the hands of the British including the Battle of Trafalgar in 1805.

'We Need a Bit of Respect'

The news comes a day after the two leaders sparred over Brexit arrangements, in particular deliveries of chilled meat to Northern Ireland. The Telegraph reported that Johnson asked Macron how he would react if French courts prohibited moving Toulouse sausages to Paris. According to the newspaper, the French head of state answered that Toulouse and Paris are part of the same country.

The answer allegedly infuriated Johnson, who told Macron that "Northern Ireland and Britain are part of the same country as well". Speaking to reporters, the UK Prime Minister said that London would do "whatever it takes" to protect its territorial integrity.

The Elysee Palace then released a statement, saying that Macron didn’t confuse Belfast’s status in the union, but wanted to stress that the comparison was not appropriate. "Toulouse and Paris [are] on a geographical unity of territory, Northern Ireland is on an island," read the statement.

However, Paris’ clarification failed to mollify London. Foreign Minister Dominic Raab described Macron’s comments as "offensive" and pointed out that this was not the first time EU leaders had mentioned Northern Ireland "as if it were some kind of different country to the UK".

"It has real world effects on the communities in Northern Ireland, creates great concern, great consternation. Could you imagine if we talked about Catalonia, the Flemish part of Belgium, one of the lander in Germany, northern Italy, France's Corsica as different countries? We need a bit of respect here," said Raab.

Northern Ireland resulted from the Government of Ireland Act 1920 which has been opposed by republican Roman Catholics ever since and the province has remained divided on sectarian lines, with nationalists wanting to reunite with the Republic of Ireland and unionists wanting to remain part of the United Kingdom. The two sides have fought many a conflict in the ensuing century but the unrest was partly brought to an end with the signing of the Good Friday Agreement in 1998.