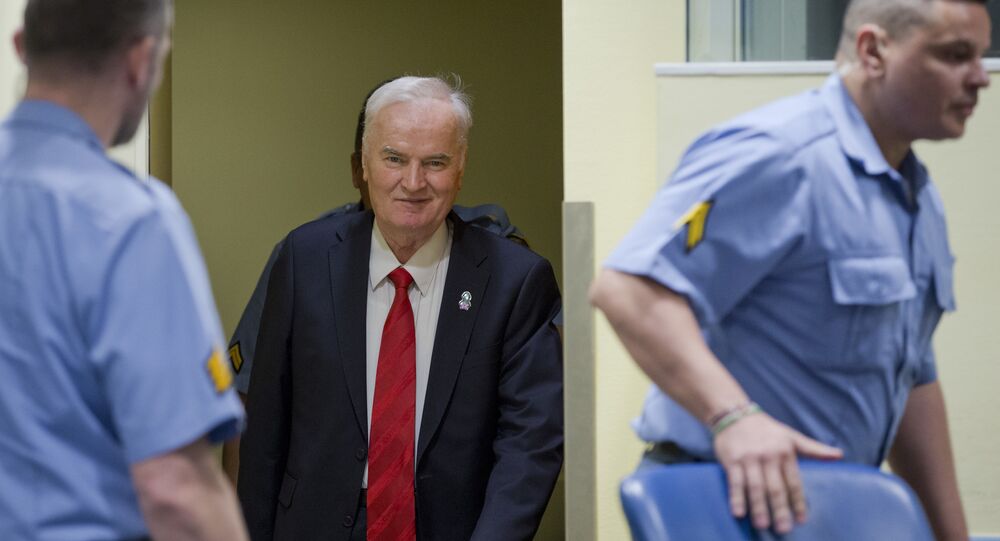 BELGRADE (Sputnik) - Relatives of former commander of Bosnian Serbs, Gen. Ratko Mladic, hope that judges of the International Residual Mechanism for Criminal Tribunals (IRMCT) will rule on Tuesday either to release him or to carry out relitigation, his son, Darko Mladic, told Sputnik.

The IRMCT's appeals chamber will announce later on Tuesday its decision on the appeal against Mladic's life imprisonment. However, Mladic's lawyers and family believe scheduling the ruling for 8 June was "hasty."

"As for Ratko Mladic's expectations, we all expect that the arguments of the appeal indicating the points that the first-instance court approved mistakenly will have effect, and the general will be released, while the verdict will be canceled. Or, perhaps, the verdict of the first-instance court may be canceled, and a new trial may start," Mladic said.

Ratko Mladic will be present at the announcement of the verdict despite his poor health, his son assured, noting that the former Bosnian Serbs commander has difficulty walking.

"The general wants to be there and endure it all. We noticed earlier that every time Ratko Mladic appears in court, he braces himself a few days earlier and after that his condition sharply deteriorates. So, the announcement of the verdict will be a huge load for him, but the general wants to be present and not to miss it for health reasons. We all hope that he will be able to withstand it in spite of his weak condition," Mladic said.

He added that lawyers will not be present in the courtroom when the IRMCT will announce its decision on the appeal.

The IRMCT announced earlier that international lawyer Peta-Louise Bagott, accredited at the tribunal in The Hague, would be present in the courtroom.

In November 2017, the UN Criminal Tribunal in The Hague convicted Mladic of war crimes that date back to the 1992-1995 armed conflict in the Balkans, including of his role in the Srebrenica massacre, which saw many Bosnian Muslims killed. He was sentenced to life in prison.