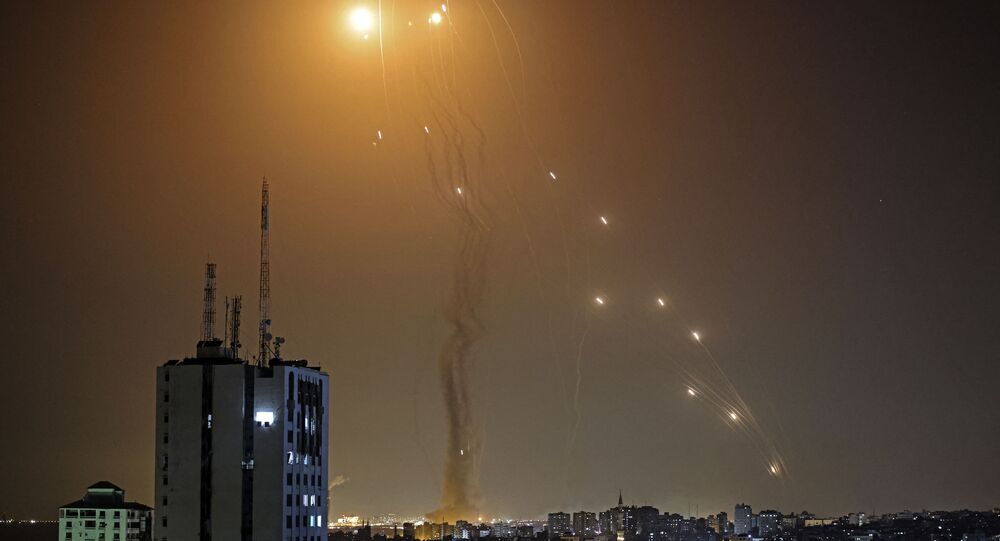 Merkel: Europe Can't Solve All Conflicts in One Stroke, Especially the Israeli-Palestinian Issue

Tensions between Hamas and Israel flared up with renewed vigour on 10 May after the Gaza-based militant group fired hundreds of rockets towards Israel. Over 10 days of hostilities, Hamas has fired more than 3,000 rockets into the country, killing 12 Israelis. An IDF counter operation, in turn, has left over 200 Palestinians dead.

German Chancellor Angela Merkel has stated that Europe cannot resolve all of the world's conflicts "in one stroke", especially if they are as complex as the Israeli-Palestinian issue.

Merkel brought up the EU's attempts to resolve the conflict in civil war-torn Libya, noting that the peace process was more "successful" after it was taken over by the UN.

Further elaborating on the Israeli-Palestinian conflict, Merkel said Germany supports Israel's right to self-defence and stressed that Berlin sees the IDF's "massive action" as the "right" thing to do. The German chancellor, however, does not believe that it will help achieve lasting peace in the region.

"On the other hand we want to contribute to diplomatic attempts to secure a long-term and sustainable situation in the region", she said.

Merkel added that part of the process of achieving peace or at least a ceasefire would be holding "indirect talks" with Hamas – a Gaza-based group that started the hostilities against Israel on 10 May.

Over the last 10 days, Hamas has fired over 3,300 rockets towards Israel. Despite the country's Iron Dome system intercepting 90% of them, 12 Israelis have been killed since the hostilities started and over 60 have received injuries.

The Gaza group linked its attack with the perceived oppression of Palestinians living in Jerusalem, who were limited in their ability to visit certain religious sites during the month of Ramadan.

The IDF retaliated by carrying out airstrikes on the presumed positions of Hamas in Gaza, killing over 200 Palestinians. While Tel Aviv described the measure as the country exercising its right to self-defence, it has faced criticism for the high count of civilian casualties – according to the Palestinian authorities some 60 minors have died as a result of the Israeli airstrikes.

IDF airstrikes targeted the Qatar Red Crescent building and a multi-storey building hosting the offices of AP and Al Jazeera in Gaza. Neither Red Crescent workers, nor journalists were killed in these attacks. The Israeli military explained that Hamas operated from these buildings, using its inhabitants as human shields. The IDF added that it had warned the companies in the building about an imminent strike, but AP representatives said it was a close call that nearly resulted in casualties among its employees.