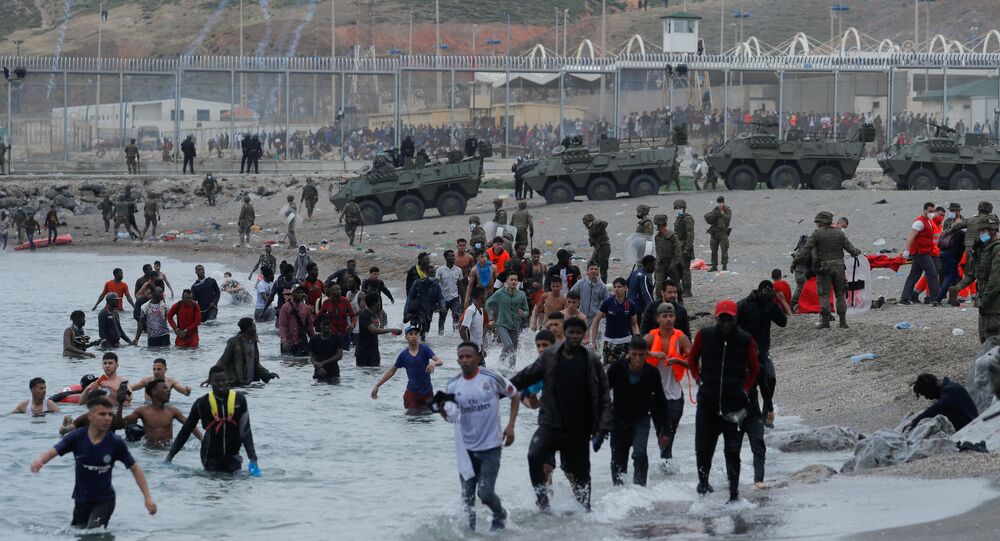 The enclave, bordering Morocco, has long been a lucrative target for African migrants seeking a gateway into Europe. However, most of them are sent back even if they reach its shores.

The Spanish overseas enclave of Ceuta, located in Africa, faced a staggering daily influx of around 6,000 migrants between 17 and 18 May, with around 1,500 presumed to be minors. At least one migrant reportedly died in an attempt to reach its shores.

Scenes from #Ceuta are surreal. Dozens are trying their luck in the sea, swimming around the fence. Later with low tide, those who can’t swim will have a chance to walk the distance pic.twitter.com/gIl3rI6OWr

Since Ceuta is separated from its only neighbour - Morocco - by a double fence, the migrants chose to get to the enclave by sea: either using inflatable boats or by simply swimming there. The territory's border forces were apparently ill-prepared for such a significant influx, with Madrid working on deploying more people to prevent new mass arrivals.

"By Tuesday morning, around 6,000 people had crossed the border into the Spanish city of Ceuta..."

Thank goodness we left the EU.https://t.co/orgvM7GeCW

Spanish military firing tear gas to disperse people massed on the Moroccan side of the border fence #Ceuta pic.twitter.com/wCB39urzZc

Even though African migrants have long seen Ceuta as a gateway to Europe, more accessible than crossing the Mediterranean, most of the 6,000 migrants who arrived on Monday are likely to be sent away. Madrid struck an agreement with Rabat allowing the country to send the migrants, arriving in Ceuta illegally, back to Morocco – something that Ceuta's authorities have already started doing.

"At this time we have returned 1,500 of those people and we are proceeding to continue with this return and get the situation back to normal", Spain's Interior Minister Fernando Grande-Marlaska said.

At the same time, Madrid can make exceptions for unaccompanied minors, as it did in a previous, albeit much smaller immigration wave. The latter took place at the end of April 2021, when 100 young Moroccans swam into Ceuta illegally.

It is unclear what caused the sudden spike in illegal immigration from Morocco and if the latter has relaxed its own border vigilance. Madrid and Rabat recently engaged in a diplomatic spat over Span's decision to admit the leader of the Polisario Front, which is fighting for Western Sahara's independence with Morocco, to be treated for COVID-19. However, Madrid rejects the allegation that the influx of migrants in Ceuta is Rabat's retribution for treating Brahim Ghali – the chief of the Polisario Front fighters – for "strictly humanitarian reasons".

EU-Turkey Migrant Deal: Will Turkey Continue to be a 'Waiting Room' for Refugees?