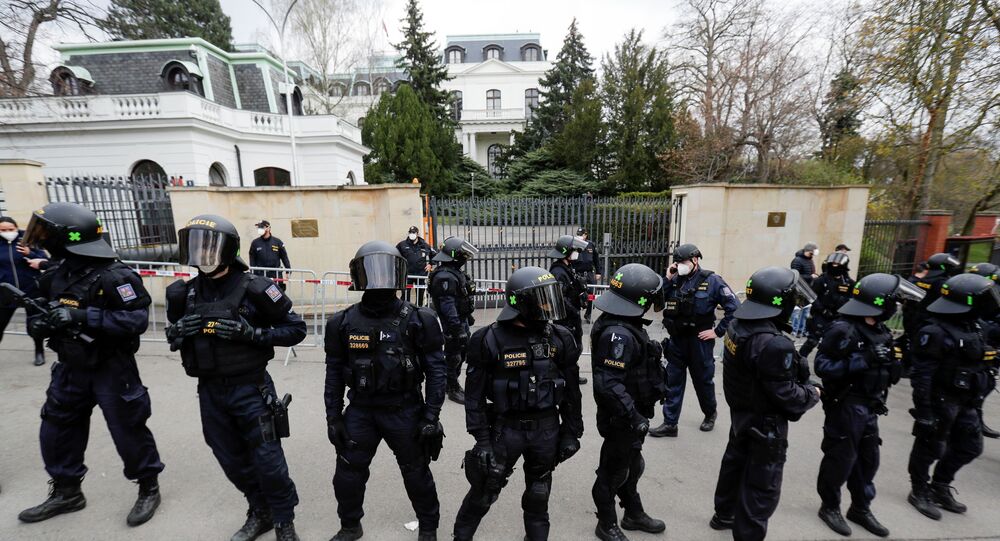 Six years after the blast in Vrbetice, the Czech authorities are suddenly pointing the finger at Moscow, although the country's security services have never had any proof of Russia's involvement. What's behind the sudden change of heart and narrative, and who benefits from the Russo-Czech spat?

Czech government officials appear divided over the alleged reasons behind the 2014 Vrbetice explosions: speaking to Novinky.cz on 29 April, Justice Minister Marie Benesova said that there are several versions of the incident, adding that her opinion is "very close to that" of President Milos Zeman.

Earlier, Zeman cast doubt on Prime Minister Andrej Babis' claims of Russia's secret services being behind the blasts. In last Sunday's televised address, President Zeman emphasised that the Czech Republic’s Security Information Service had never before mentioned Russia's involvement in the Vrbetice incident over the past six years.

"For the last six years the Czech police and investigations have considered it to be a case of 'reckless endangerment' by the private company, the Imex Group, that was storing the munitions owned by a shady Bulgarian arms dealer in less than perfect conditions," says Mark Sleboda, a US military veteran and international affairs and security analyst.

According to the analyst, Babis, who is now suddenly blaming Russian agents for the arms depot explosions used to accuse the company that was storing the ammunition, the Imex Group. After the explosion Babis – then a finance minister – stated on public Czech Television (CT) that Imex had been mired in controversy exporting arms to Congo, regardless of embargos, and selling ammo to Bulgaria – where it also caused an explosion.

The Imex Group took the Czech state to court over Babis releasing and distorting confidential information from the investigation which harmed the firm's reputation, but to no avail.

Meanwhile, the conditions at the arms depot indicated that they had been extremely shoddy and hazardous, Sleboda highlights.

"Czech academic research into the Vrbetice arms depot has uncovered that old WWI and WWII-era munitions were also housed on the site, that there were holes in the fencing around the site from logging and vandalism in the ammunition warehouse area," he says. "There also appears to have been no security control or documents check to access the area in place."

Given all the evidence of unsafe conditions at the depot and controversy surrounding the firm leasing it, the question is – why has the Czech government decided to suddenly blame Russian intelligence services for blowing up the munitions now? asks Sleboda.

Bellingcat, The Insider, and RFE Fanning the Flames

British journalist Edward Lucas apparently offers a clue to this riddle in his recent CEPA op-ed: "Only when allied services (mostly American or British) intervene does anything happen," he writes. "That seems to be the case this time." According to him, "someone tipped off the Czech authorities" that Petrov and Boshirov were involved in the blast.

Lucas' assumption appears to be spot on, especially given that he has been suspected of being part of the British state propaganda operation called Integrity Initiative, according to Sleboda.

Bellingcat, which was recently exposed as part of the UK Foreign and Commonwealth Office-funded (FCO) operation to smear Russia by Anonymous hackers, also rushed to weigh in. On 20 April, the media claimed that together with The Insider it managed to identify a group of alleged Russian spies including Petrov and Boshirov, who were "present in Czechia during the period when a large arms depot exploded in northern Moravia" under fake names.

The "comeback" of two Russian "villains" Petrov and Boshirov, who were previously accused by the UK of the botched poisoning of Sergei Skripal, seems ludicrous and is reminiscent of Boris and Natasha from the old "Rocky and Bullwinkle" cartoons, argues Sleboda. But that's not all.

"They are now trying to blame the slapstick Russian duo not only for the arms depot explosions in Czech, but more munitions explosions later in Bulgaria, and not one but two more once again failed poisoning attempts this time against a shady Bulgarian arms dealer," the security analyst notes. "Western media and intelligence agencies seek to present these two characters as idiot 'supermen' who are supposedly repeatedly tasked by the Russian government with widely different covert operations covering all different skill sets all over the world, from multiple failed poisonings to blowing up private arms depots, blundering again and again through it all."

However, the alleged presence of Russian individuals somewhere in Central Europe does not prove their role in blowing up the depot, let alone the Kremlin or Russian intelligence services' involvement in the incident, Sleboda says.

In addition, the Russians have no clear motive for blowing up the depot. After back and forth in suggesting the reasons for Moscow's alleged involvement in the incident, Bellingcat's narrative now "rests on Russia taking pre-emptive action to destroy Soviet-era munitions in Europe that one day could possibly be exported to Ukraine," the US military veteran remarks, adding that "that is a pretty far-fetched argument."

Meanwhile, on 22 April, Radio Free Europe, a US government-funded organisation, claimed that it found a link between the Russian military intelligence agency, known as the GRU, and the Bulgarian explosions in 2015.

The aforementioned media's selection in presenting the "Russia did it" story to the international public "is more than anything an indication that US/UK intelligence is behind these allegations and driving the Czech government and security services," according to the security analyst.

Who Will Benefit From Czech-Russia Row?

The intended purpose of this "likely CIA/MI6-provoked psyop campaign" is twofold, Sleboda suggests:

·         First is to further demonise Russia and thus reduce its influence on and relations with states in Eastern Europe.

·         The second, stemming from the first, is to further force the political and economic decoupling of Europe from Russia.

When it comes to the Czech Republic, these allegations are apparently being used to:

·         expel Russia's state-owned nuclear power company, Rosatom, from the tender to expand the Czech Dukavony Nuclear Power Plant which makes the US' Westinghouse corporation the most likely winner although its project is far more costly;

At the same time, tensions are brewing within the Czech political establishment. On the one hand, the scandal is being driven by Prime Minister Andrej Babis, his newly appointed anti-Russian Foreign Minister Jakub Kulhanek, the head of Czech counter-intelligence SIS Michal Koudelka, and the Czech Interior Minister Jan Hamacek, according to Sleboda.

Babis' premiership has been mired by corruption investigations and the European Commission's audit, which has ruled that the billionaire and owner of agro-chemical conglomerate Agrofert has a conflict of interests with his political position. Besides that, the Czech prime minister has long been criticised over the "chaotic" handling of the pandemic. With his approval ratings plummeting, Babis' odds in the October 2021 legislative elections aren't looking good.

On the top of this, the recent Czech Communist Party's pullout from PM Babic's fragile minority government coalition presented the likelihood of a no-confidence vote and early collapse of the premier's cabinet, even before the autumn elections, Sleboda points out.

"If this were to happen, President Zeman would have the power to appoint a technical cabinet to run the government, strengthening his hand before elections," the security analyst says. "After the new allegations against Russia putting President Zeman in a more defensive and weakened political position, the opposition in the Czech parliament will probably be more hesitant about holding such a no-confidence vote which would result in the collapse of the Babis government and result in a technical cabinet loyal to Zeman. Thus these new accusations against Russia may have the effect of preventing any such political scenario from unfolding."