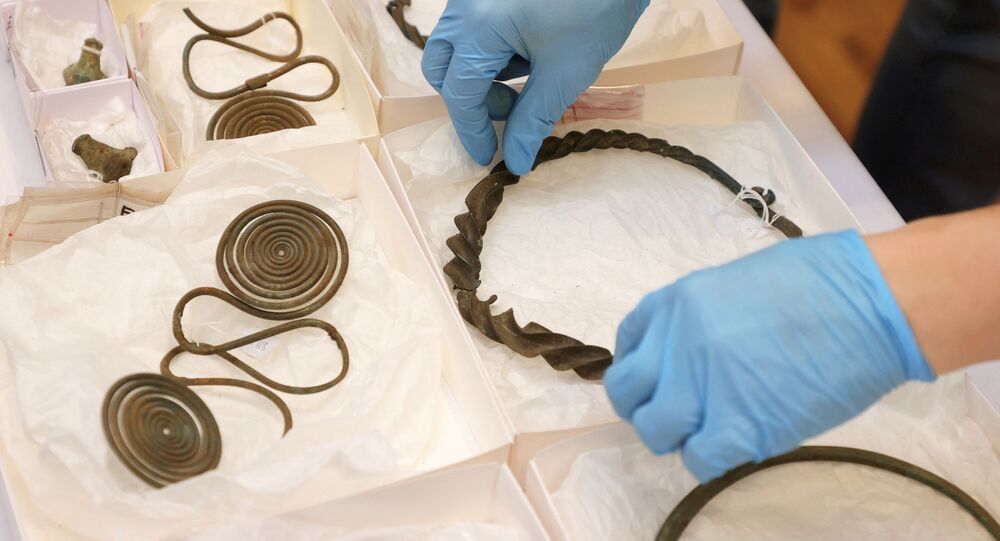 The artefacts include items such as "very well preserved necklaces, chains, and needles" made out of bronze, which supposedly date back between 750 and 500 BC.

A hoard of Bronze Age artefacts has been discovered in a Swedish forest by an orienteering enthusiast who was mapping out the area.

The find, which primarily consists of ancient jewellery dating back more than 2,500 years, is described by the County Administrative Board as one of "the most spectacular and largest cache finds."

"It looked like metal garbage. Is that a lamp lying here? I thought at first," Thomas Karlsson, who made this discovery, said as quoted by AFP.

The artefacts, which are believed to be from the period between 750 and 500 BC, include "very well preserved necklaces, chains, and needles" made out of bronze.

Even though he initially thought the objects were fake because they "all looked so new," Karlsson notified the local authorities and a team of archaeologists was dispatched to investigate the site.

Orienteering enthusiast Tomas Karlsson discovered a stash of some 50 Bronze Age relics believed to date back over 2,500 years in a forest near the town of Alingsas in southwestern Sweden.

Among them are some “very well preserved necklaces, chains and needles” made of bronze pic.twitter.com/W9ygudI4Zl

​"Most of the finds are made up of bronze items that can be associated with a women of high status from the Bronze Age," said Johan Ling, professor of archeology at the University of Gothenburg. "They have been used to adorn different body parts, such as necklaces, bracelets and ankle bracelets, but there were also large needles and eyelets used to decorate and hold up different pieces of clothing, probably made of wool."

The artefacts were apparently lying out in the open when Karlsson stumbled upon them, with the authorities suggesting they may have been dug out by animals.