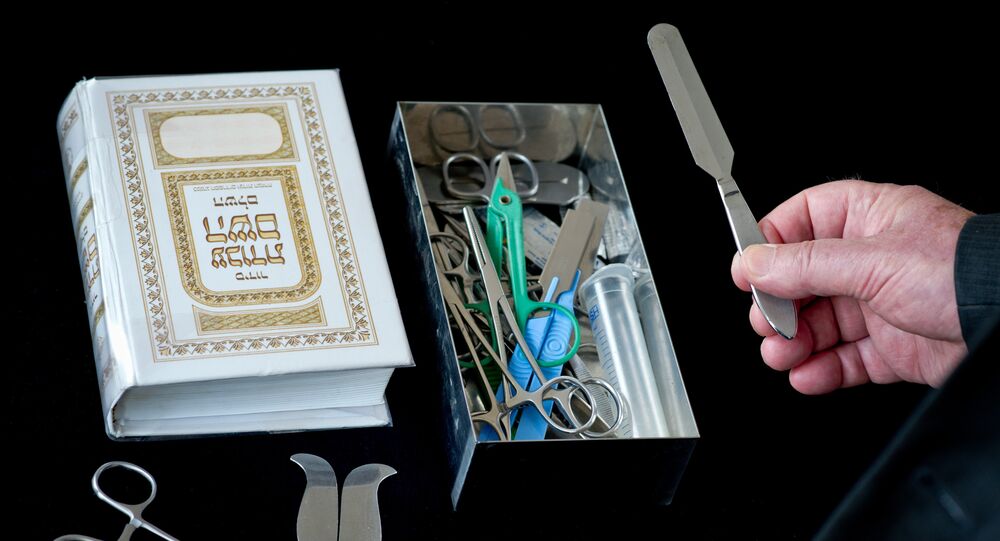 The Danish government has previously reversed itself on banning ritual circumcision for minors, citing the necessity to protect the Jewish way of life, despite enjoying the support of merely 10 percent of Danes on this matter.

Both the US and Israel have put pressure on the Danish government to avoid Denmark becoming the first country in the world to introduce a ban on the circumcision of minors, Danish Radio has reported, citing a number of recently-revealed documents.

According to Danish Radio, the foreign meddling started in 2018, when Intact Denmark, an interest organisation working to eradicate ritual circumcision, submitted a petition to parliament listing arguments in favour of an age limit on circumcision. Subsequently, the members of the organisation were invited to a meeting with the US embassy, where they were reportedly asked to withdraw the petition.

Intact Denmark chairwoman Lena Nyhus ventured it was “extremely undemocratic” of the US or any other country to interfere in Danish domestic politics.

However, this was only the start of an influence campaign, Danish Radio reported. According to a report from the Danish embassy in Washington, Democratic Majority Leader Steny Hoyer and delegates from both the American Jewish Committee and the Conference of Presidents of Major American Jewish Organisations paid visits to press the ambassador on the progress of the proposal and its reception amongst the Danish public.

Another report, from the US Police Intelligence Service, revealed that the World Jewish Congress has appeared before official Danish representatives to argue that a ban would “threaten the existence of Jewish society in Denmark”.

Remarkably, Frederiksen herself made a prominent U-turn on the issue of circumcision over the years. In 2008, she told the newspaper Kristeligt Dagblad that religion “cannot legitimise inflicting physical defects on children”. In 2020, when presented with a real life opportunity to act on it, she said that the ban is not the right way forward, as it would threaten Denmark's Jewish community and its way of life. Frederiksen said it was “fortunate” that she had changed her position and come to understand what millennia-old rituals mean for Denmark's Jewish community.

Strong reactions and condemnation of meddling

Scholar of religion Brian Arly Jacobsen of the University of Copenhagen, ventured that this is “quite unique” of foreign governments to exhibit such an interest in a bill in Denmark.

Many politicians from both left and right have condemned it the undisputed foreign interest meddling.

Liberal Alliance group chairman Ole Birk Olesen suggested it was “crossing a line in terms of what good alliance partners do to each other”.

Peter Hvelplund, chairman of the Red-Green Alliance, called it “unacceptable”, emphasising that other powers have no right to interfere in Danish affairs.

However, others were okay with the perceived foreign meddling.

Liberal-conservative Venstre group chairman Karsten Lauritzen said it was not surprising and emphasised that Denmark also engages in lobbying and brushed criticism aside as “double standards”.

Swift defence from US and Danish politicians

Interim US Ambassador to Denmark Stuart Dwyer defended his nation by calling this “normal diplomatic commitment” which he described as “engaging in a wide range of topics”, Danish Radio reported.

American Jewish Committee director Andrew Baker waved aside any accusations of manipulation, stressing that the US side was simply reflecting its worries.

Finally, Danish Justice Minister and Frederiksen's party mate Nick Hækkerup also defended the lobbying by saying it was “almost impossible” to find cases where outside interest groups don't try to influence what the government thinks.

Despite the government’s initial decision against the ban, a recent poll by Epinion indicated that 73 percent of Danes believe the ban on ritual circumcision of boys below the age of 18 should be introduced. By contrast, merely 10 percent responded that they were against a ban.

The circumcision of boys, practised by Muslims, Jews, and even some Christian denominations, has been hotly debated in Denmark, including its ethical and medical aspects, as botched ritual circumcisions result in dozens of hospitalisations every year.

However, while the debate has been mostly focused on Denmark's relatively small 6,000-strong Jewish diaspora, the community is dwarfed by the country's burgeoning 320,000-strong Muslim population.

“There is a fundamental lie in Danish politics – and circumcision of boys is part of it. When Mette Frederiksen had to explain why she had changed her stance about a ban on circumcision, she addressed the history of Europe, the persecution of Jews and the commitment of the Social Democrats. But behind it lay a serious threat of a new Muhammad crisis”, the newspaper Berlingske wrote, referring to the growing Muslim community and the international uproar caused in 2005 by the Muhammad cartoons published by the Danish newspaper Jyllands-Posten.