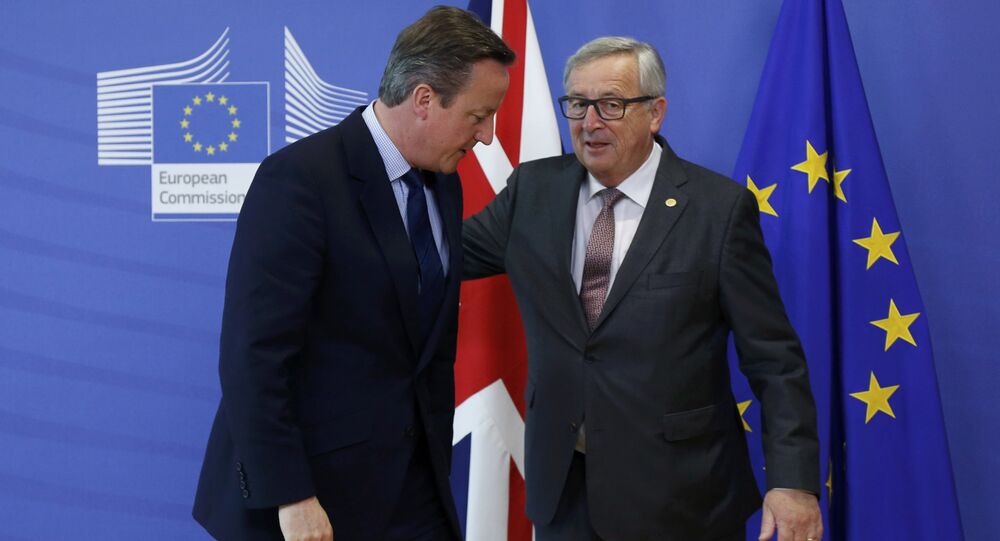 'They Asked Me to Shut Up': Juncker Claims Cameron Told Him Not to Interfere in UK's Brexit Debate

In a 2016 referendum on the UK's membership in the European Union, 52% of Britons voted to leave the bloc, while 48% said "no" to Brexit.

Former European Сommission President Jean-Claude Juncker has lashed out at ex-UK Prime Minister David Cameron, claiming that five years ago, Cameron kept him from convincing Britons to oppose the nation's withdrawal from the EU.

In an interview with the UK newspaper i published on Monday, Juncker, who was European Сommission President between 2015 and 2019, referred to events in 2016, when the struggle for the Brexit referendum intensified and then-UK PM Cameron told him not to speak to the British media.

Some 52% of voters saying "yes" to Brexit during the 23 June 2016 referendum left the EU in shock, and shortly after Cameron resigned as UK prime minister.

"I should not have listened to David Cameron. He told me not to interfere in the debate in the UK, not to come to London, not to do interviews with the British press. I made a mistake because I did not defend the EU's point of view in the UK. They asked me to shut up, so I shut up. That is something I criticise myself for. I should have spoken out rather than stay silent", Juncker said.

The UK officially left the EU on 31 January 2020, triggering an 11-month transition period that gave both London and Brussels time to conclude a range of agreements, including a free trade deal.

Separately in the interview, Juncker touched upon the COVID-19 vaccine rollout, berating Brussels and European Commission President Ursula von der Leyen over the handling of the issue.

He insisted that the EU still lagging behind the UK in terms of vaccinations may damage the bloc's project as such.

"[…] because the promises made at the beginning of the year, that it was 'the hour of Europe' - and it's always the hour of Europe - and that everyone would be vaccinated before the deadline, well, those promises were not kept", the ex-European Commission president said.

At the same time, Juncker admitted that "in an extraordinary situation like this, it is inevitable that some mistakes will be made".

The EU's vaccination programme has been affected by a shortage of vaccine supplies, due to delays in deliveries from manufacturers, including the Anglo-Swedish pharmaceutical company AstraZeneca. The European Commission has repeatedly accused AstraZeneca of failing to implement contract terms with the EU and of prioritising Britain, allegations that the company rejects.

'I'm not an Alcoholic', Juncker Says

Additionally, Juncker told i that the rumours about him being a heavy drinker hold no water, especially given that he has a medical condition.

"I still have the sciatica. I still limp. And yet they say the guy is drunk again. I've never been drunk in my life. It hurt me. I can't really give a press conference to say: 'I'm not an alcoholic'. That would have been incompatible with my basic dignity", he added.

© AFP 2021 / Will Oliver
Boris Johnson Answers Questions on Lobbying Controversy Involving Former PM David Cameron
A couple of years ago, footage of Juncker stumbling and being helped down the stairs by world leaders sparked speculations as to whether he was drunk while on duty, whereas others said they feared for his health.

As for Cameron, he is currently embroiled in a scandal pertaining to allegations that the ex-UK PM lobbied ministers in Boris Johnson's government on behalf of Greensill Capital, a private firm, which was once a major financier of UK steel production.