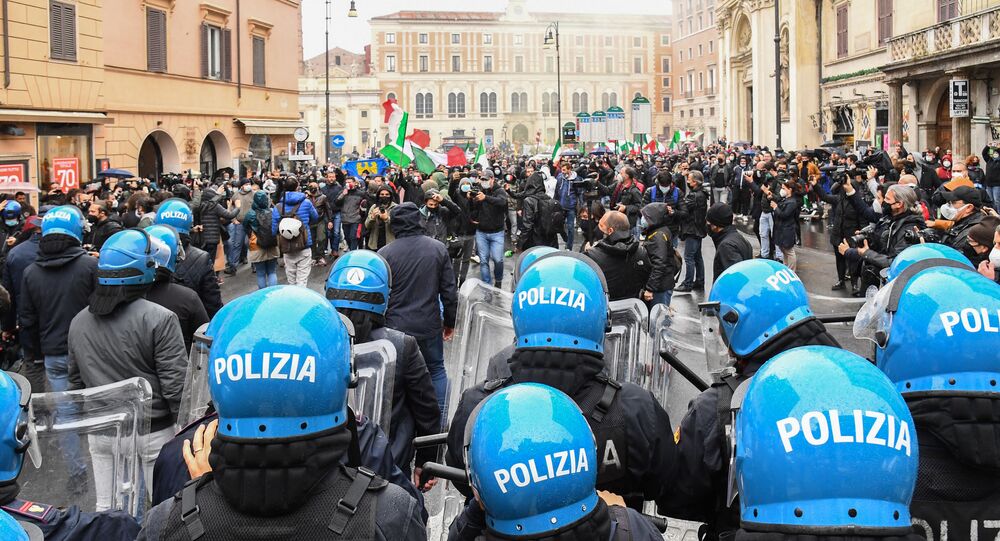 ROME (Sputnik) - Hundreds of demonstrators, some of whom identified as entrepreneurs and activists, gathered on Monday in central Rome, Italy, to protest against stringent lockdown measures, urging the government to ease COVID restrictions to prevent further financial losses and destruction to businesses.

Since last week, several major Italian cities have been grappling with mass protests initiated by business owners who suffered financial losses due to COVID-19 restrictions.

After the April 6 protests outside the Italian parliament, which resulted in clashes with police, organizers called for a second gathering and promised to bring up to 20,000 supporters to Rome. The local police refused to authorize the rally.

A Rome police spokesperson explained to Sputnik that the square in front of the Montecitorio Palace, the seat of the lower house of the Italian parliament, cannot accommodate such a large number of people. According to the police, the area was already booked by other protesters in the same time slot.

Protesters in #Rome during a demonstration of restaurant owners and workers, entrepreneurs and small businesses owners, demanding the easing of lockdown restrictions and financial assistance pic.twitter.com/PNcT0iBzVl

​As a result, the central quarter of the Italian capital around Montecitorio Palace and the government's Chigi Palace was cordoned off on Monday. Protesters moved to a nearby bus hub, chanting the slogan IoApro ("I will open") and holding banners saying "Fear of death makes us live," "We want to work," and "Hands off."

"Unfortunately, no wedding ceremonies have been held since the start of the lockdown. And the government doesn't help in any way. My store is out of business," the owner of a photo studio in Rome said.

​Another protester commented to Sputnik that he was only able to re-open his restaurant for only two weeks in October because of the restrictions.

"We came here to show our dissatisfaction in a legal and peaceful way. It's time to ease the restrictions since the virus has been spreading regardless of which places are open or closed," he said.

According to a Sputnik correspondent at the site, the majority of protesters arrived in Rome from Sicily and other southern regions of the country by bus and train. In total, about 500 people have gathered in the square at the time of reporting.

An hour after the start of the rally, some protesters approached the cordon to demand to be let into the government buildings. During the standoff, someone launched firecrackers and several heavy objects into the ranks of law enforcement officers.

Despite this, the situation did not escalate and the rally continued peacefully as protesters waved Italian flags and chanted "Freedom!"