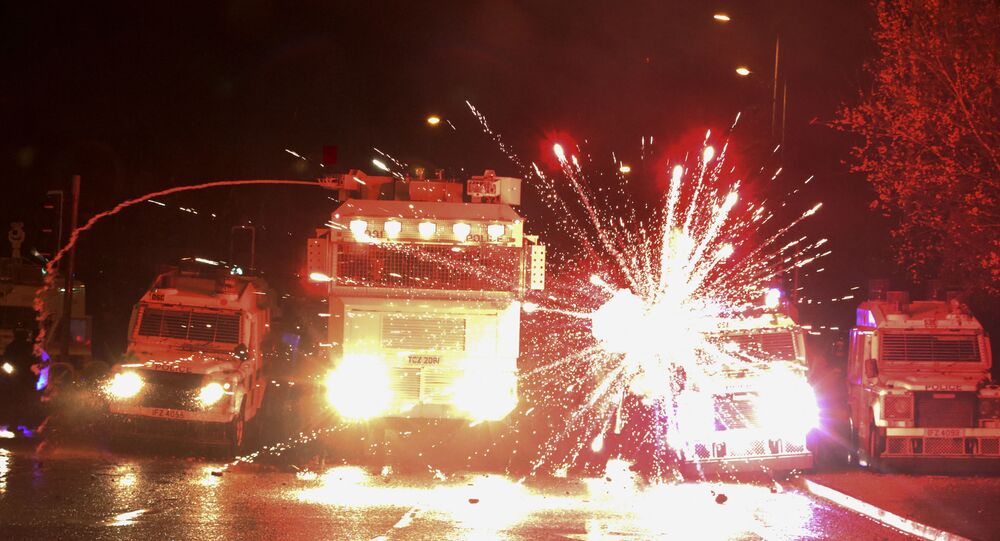 Nortern Ireland: Taoiseach Warns Against ‘Spiralling Back to That Dark Place of Sectarian Murders’

On Friday night, police dispersed protesters with water cannons in Northern Ireland's capital Belfast, where the crowds responded by throwing fireworks and stones at officers.

The Police Service of Northern Ireland (PSNI) have ruled out the involvement of the Loyalist Communities Council (LCC), an umbrella group representing loyalist paramilitaries, in being behind the ongoing mass protests in the country.

In an apparent nod to the LCC, the PSNI said in a statement that it is their "overall assessment that the violence that has taken place over the last few nights is not orchestrated by a group, in the name of that group".

The statement was echoed by PSNI Assistant Chief Constable Jonathan Roberts who noted on Friday that police feel "there may be some people who could have [a] connection to proscribed organisations, who have been present on the scenes of violence".

© AFP 2021 / PAUL FAITH
Flames lick up the front of a police vehicle as police officers are attacked by nationalist youths in the Springfield Road area of Belfast on April 8, 2021 following days of loyalist violence. (Photo by Paul Faith / AFP)

At the same time, he stressed the PSNI doesn't believe "it's been sanctioned and organised by prescribed organisations for peaceful protests". It seems the statement was an about-face from what Roberts claimed on Thursday, when he insisted it was "clear there was a degree of organisation" to the violence.

The Friday assessment came shortly after the LCC confirmed that "none of their associated groups have been involved either directly or indirectly in the violence witnessed in recent days".

On the other hand, the LCC pointed to a "spectacular collective failure" to understand their frustration over Brexit and other pressing issues, including those related to the border protocol, which the group said should be renegotiated.

"We have repeatedly urged HM Government, political leaders, and institutions to take seriously our warnings of the dangerous consequences of imposing this hard border on us and the need for earnest dialogue to resolve matters. We reiterate that message now", the LCC emphasised.

Commenting on the ongoing protests, Irish Taoiseach Micheal Martin, for his part, emphasised that the country’s political leaders should not allow Northern Ireland to “spiral back to that dark place of sectarian murders and political discord”.

He pointed out “a particular onus on those of us who currently hold the responsibility of political leadership to step forward and play our part and ensure that this cannot happen”.

The remarks followed the seventh consecutive night of protests in Northern Ireland, including the capital Belfast, where police used water cannons to tackle the crowds as rioters hurled petrol bombs and stones at PSNI officers.

© AP Photo / Liam McBurney
What Is Going On In Northern Ireland And Is It In Danger Of Slipping Back Into The Troubles?
The unrest kicked off late last week, when dozens of Northern Irish police officers were injured after loyalists clashed with law enforcement officers due to growing dissatisfaction with post-Brexit arrangements and a decision not to punish politicians from the main opposition party Sinn Fein for flaunting COVID-19 restrictions.

The violence has been fuelled by concerns many people share over the Northern Ireland Protocol (a part of the Brexit deal between London and Brussels), given that various goods currently require additional checks and certifications to be shipped to Northern Ireland from other parts of the UK.