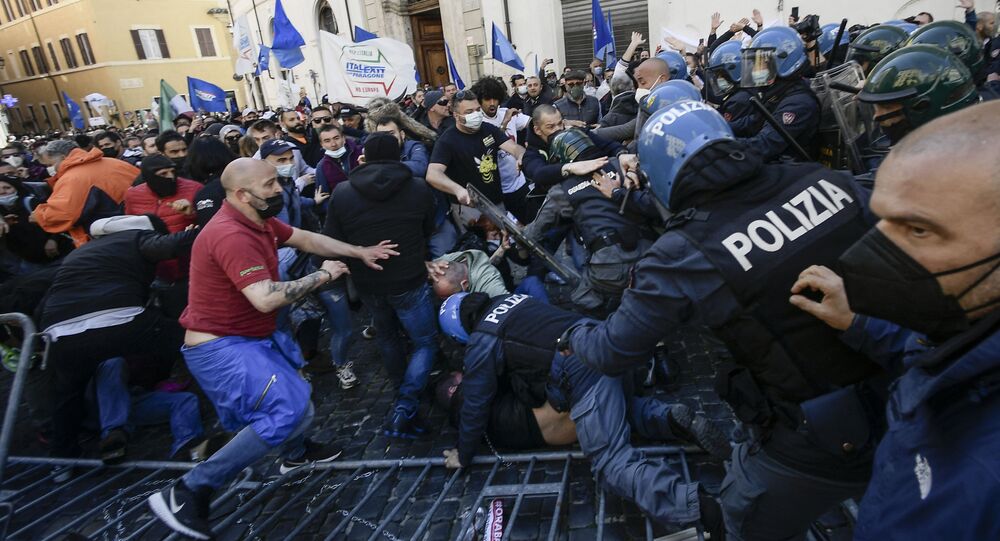 ROME (Sputnik) - An Italian police officer on Tuesday sustained injuries and several people were detained during riots in downtown Rome, which started as a demonstration against the government-imposed COVID-19 restrictive measures, national media reported.

People in major Italian cities, including Rome and Milan, took to the streets to protest stringent rules, as most business owners suffered huge financial losses. Italians fear that all dining places and shops across the country will remain closed even after the three-day Easter lockdown.

According to the RaiNews23 broadcaster, the demonstration at the Monte Citorio square in Rome escalated into clashes between the police and protesters, who threw plastic and glass bottles at the law enforcement officers, while many tried to break through the police cordon. The police managed to take control of the situation and detain several protesters. However, the situation in the city centre remains tense.

Protests in Rome before Parliament and all of Italy as 1000s of restaurateurs and merchants protest the Public Health shutdown restrictions: https://t.co/9wp3EceMZl

​During the rally, protesters chanted anti-government slogans, including "Freedom!" and "We are business people, not criminals."

On 15 March, Italy tightened the coronavirus restrictions in a bid to curb the spike in the number of infections. The authorities decided to introduce the toughest nationwide lockdown for Easter holidays from 3-5 April, during which people were banned from leaving their homes for any reasons other than an emergency, grocery shopping or health issues.