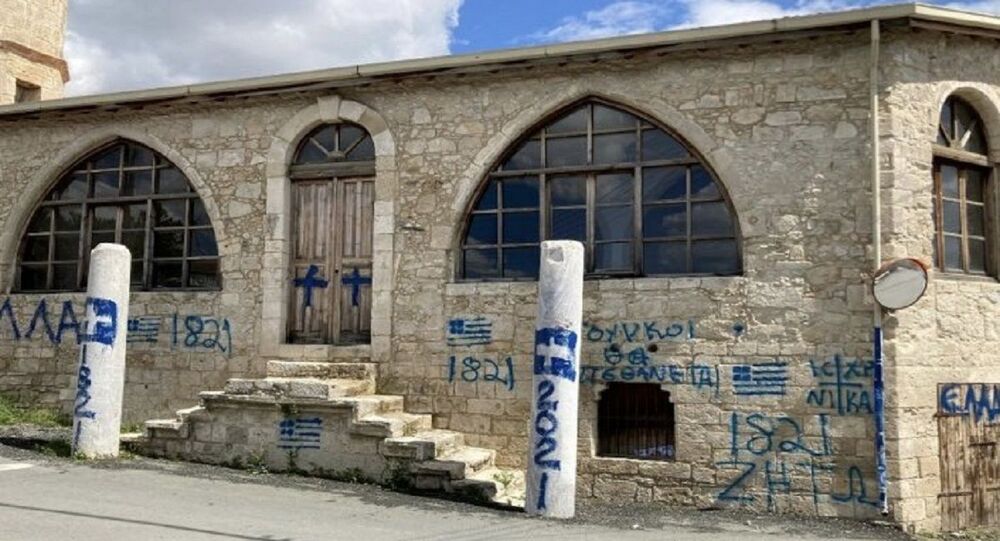 Turkey Condemns Act of Vandalism of Mosque in Southern Cyprus

ANKARA (Sputnik) - The Turkish Foreign Ministry condemned a recent act of vandalism at a mosque in southern Cyprus, which was painted with anti-Turkish slogans on the 200th anniversary of Greece's independence from the Ottoman Empire.

Media previously reported that on Thursday, unknown people vandalised the mosque in the village of Episkopi by painting Greek nationalist slogans along with the Greek flag and a Christian cross drawn on its walls and doors.

"We condemn the attack carried out yesterday (25 March) against a mosque in the village of Episkopi, in Limassol, Greek Cypriot Administration of Southern Cyprus. It is obvious that such provocative actions will not help build trust between the two peoples at a time when efforts towards reaching a settlement to the Cyprus issue have intensified", the Turkish Foreign Ministry said.

The government of Cyprus condemned the act of vandalism, while Ersin Tatar, the president of the self-proclaimed Turkish Republic of Northern Cyprus called for reprimand of those responsible for the incident as soon as possible.

The spokesman for the government of Cyprus Kyriakos Kousios noted that such actions do not contribute to creating an atmosphere for finding a solution to the Cyprus problem.

Cyprus was split between Greek and Turkish communities in 1974 after Turkey invaded the island to protect Turkish Cypriots following an uprising of Greek Cypriots that resulted in a change of government. In 1983, the Turkish Republic of Northern Cyprus declared independence but has not been recognized by any other country except Turkey. The United Nations has attempted to broker a reunification dialogue, but the effort has failed and the dialogue stalled since the last round of talks in Switzerland's Crans-Montana in 2017.