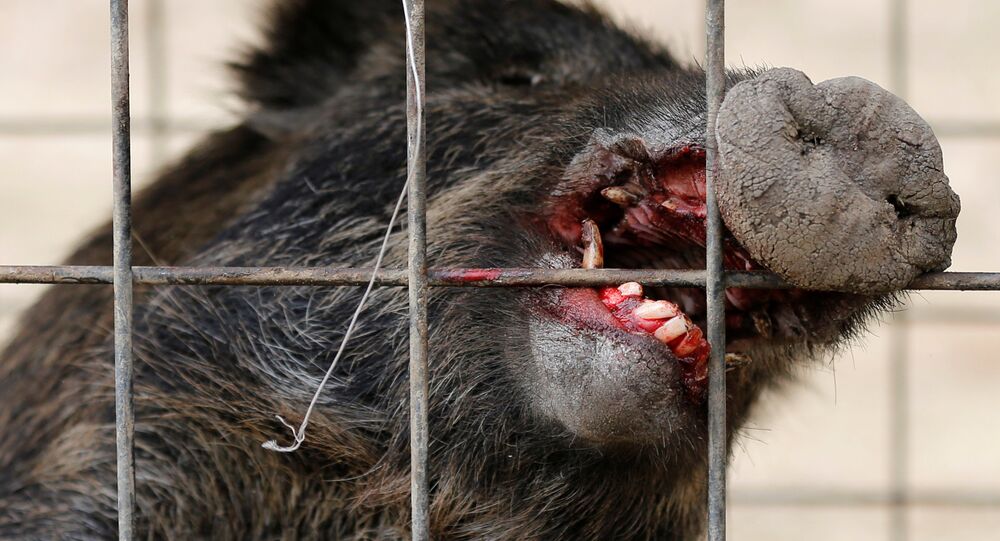 Earlier this month, the Swedish town city of Vetlanda saw a mass stabbing incident, in which a 22-year-old Afghan man injured seven people. A local association that helps migrants subsequently voiced concerns about animosity toward refugees.

A chopped-off wild boar head has been placed on a copy of the Quran in the Swedish town of Vetlanda in Jönköping County. The act is currently being investigated as a hate crime and incitement against an ethnic group, the police said.

The installation was found in a parking lot in a residential area. By the time the police patrol arrived at the scene, many onlookers had already gathered to get a glimpse.

"Many people were very upset when we arrived at the scene", police press spokesperson Björn Öberg told the newspaper Dagens Nyheter.

According to Öberg, laaw enforcement officers took the Quran back to the station to help in the investigation, but they discarded the boar head as rubbish because it was impossible to find any fingerprints or other helpful information on it.

No one at the scene saw any suspects who could possibly be linked to the incident, according to the police, who have no suspects and asked citizens in possession of any related information to contact the authorities.

Vetlanda, an industrial town of 12,500, is the seat of the eponymous municipality in Jönköping County.

© AFP 2021 / MIKAEL FRITZON
Swedish Prime Minister Under Fire for Saying Afghan Stabbing 'Not a Question of Immigration'
Barely a month ago, on 3 March 2021, it saw a mass stabbing incident that injured seven, of which three were left in life-threatening condition. The perpetrator turned out to be a 22-year-old Afghan man with a previous conviction for drug possession and known to the police for committing minor offences. According to his neighbours, he spoke Swedish poorly and no English whatsoever, which made communication extra difficult. The prosecution ruled out a terror motive, whereas Prime Minister Stefan Löfven called the act "heinous" yet notoriously contended that it had nothing to do with immigration.

Following the attack, the association Staying in Vetlanda, which was started following the migrant wave of 2015 in order to help the new arrivals, voiced concern over "antipathy toward refugees and Afghans in particular". Among other things, its chairman Daniel Berner said there was fear among Afghans living in the city "of being lumped together" with the stabber because of having the same nationality, broadcaster SVT reported.

What is Known so Far About Stabbing Attack in Sweden