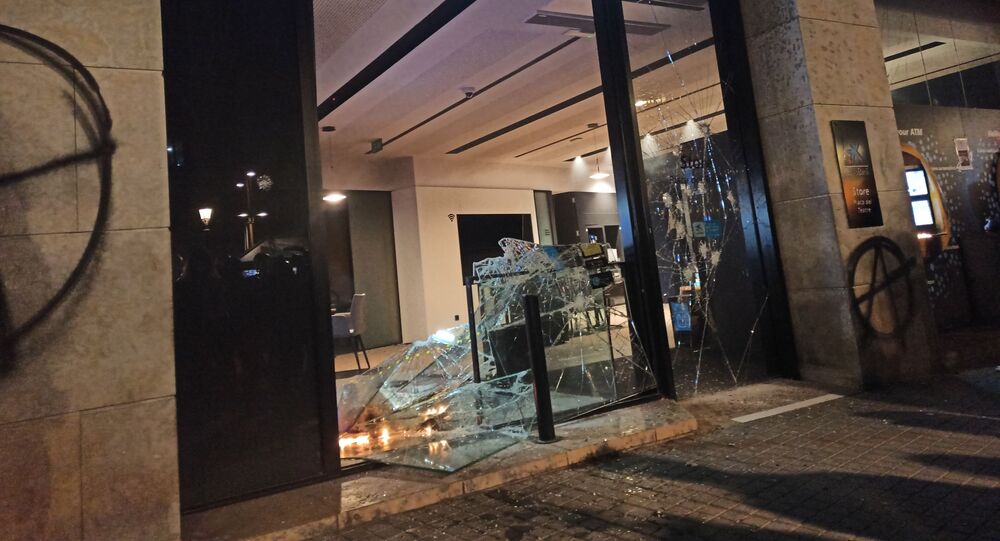 Participants of Protests Over Arrest of Rapper Pablo Hasel in Spain Smash Windows, Set Up Barricades

MADRID (Sputnik) - Protests over the imprisonment of rapper Pablo Hasel in Spain have resulted in several arrests in Barcelona, Mossos d'Esquadra, the police force of Catalonia, said.

On Saturday, 10 people were arrested amid ongoing protests following the arrest of Catalan rapper Pablo Hasel on 16 February.

"9.23 pm [20:23 GMT] We arrested 10 people related to the violent and vandalistic acts that took place this evening in Barcelona," Mossos d'Esquadra tweeted late on Saturday.

Police said protesters were arrested for assaulting law enforcement officers and for public disorder. At least one of the arrests was related to the burning of a police van in Barcelona.

According to Mossos d'Esquadra, protesters set up barricades and threw flares, firecrackers and other objects at law enforcement officers in Barcelona on Saturday. They also threw paint cans at police vehicles and burned one police van. Mossos d'Esquadra said some banks sustained serious damage.

The protesters are calling for social reform in Spain, particularly in housing and labor.

Demonstrations were also held in Lleida, Girona and Tarragona on Saturday, as well as a number of other Catalan cities.

According to the emergency services of the Catalonia Department of Health, at least five people were injured during the Saturday protests, four in Barcelona and one in Lleida.

Protests began in Spain in mid-February, after the arrest of Catalan rapper Pablo Hasel. In 2018, Hasel was sentenced to nine months in prison for glorifying terrorism and slandering the Spanish monarchy in more than 60 tweets published between 2014 and 2016, as well as in one of his songs posted on YouTube. The rapper was supposed to voluntarily report to prison earlier this month but refused to do so.

Over a hundred people have been injured during ongoing protests in Spain, including dozens of law enforcement officers.