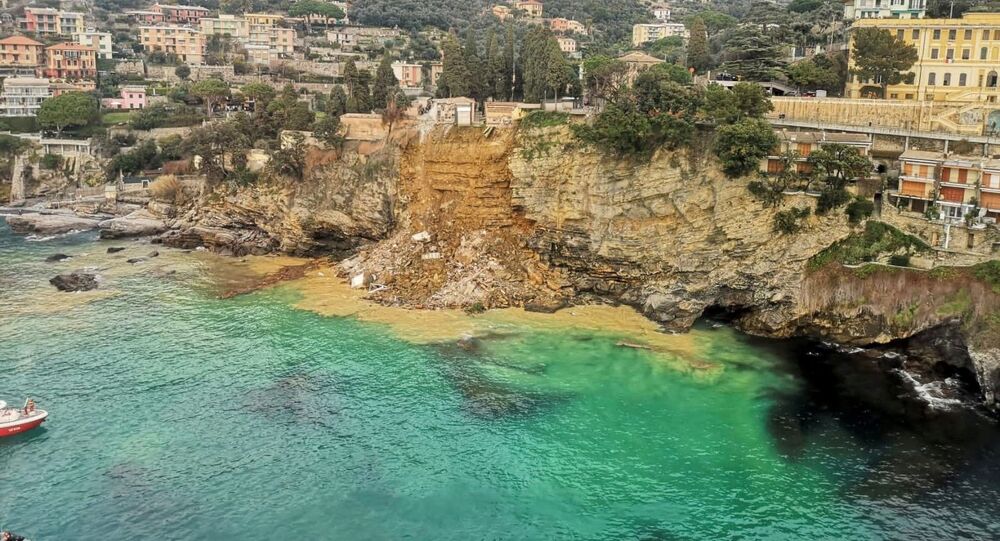 Caught on Camera: Italian Cemetery Collapses, Sending Hundreds of Coffins Into the Sea

The cemetery in the Italian town of Camogli was built near a cliff; where erosion caused a significant landslide on Monday, sending nearly two hundreds corpses in coffins into the Mediterranean Sea.

A video showing the moment of the collapse of Camogli cemetery in Italy’s Liguria region has been going viral, prompting some panicked vibes across the net after the tragedy was caught on camera by local workers.

The graveyard, located on the edge of a cliff, tumbled into water on Monday, following a landslide.

An estimated 200 coffins have fallen into the Mediterranean Sea as a result of this "unimaginable catastrophe”, as Camogli mayor Francesco Olivari has put it.

​Many have sent their deepest regrets to the relatives of the deceased ones whose bodies have not been recovered yet.

Omg how sad for the families 😢

Search operations are currently underway in Camogli, where scuba divers and marine specialists from Italy’s Central Emergency Department are trying to find and recover coffins that dropped into the sea following the collapse

Only 12 coffins have been retrieved from the sea as of Wednesday, officials said, but many more have remained scattered across and buried under the wreckage from the slide. The coastal area below the cemetery has been cordoned off on Monday night to prevent the caskets from floating further.

Divers have been scanning the seabed with “sonar devices and underwater drones” in search of buried bodies, the Central Emergency Department said on Twitter, sharing photos and videos from the site:

The Camogli cemetery is over 100 years old. The cliff, where it is located, has been weakened by heavy storms in the last couple of years, prompting erosion and the Monday landslide, Italy’s National Council of Geologists suggests.

Mayor Olivari says that tragedy like that is “very hard to detect or to predict”:

"This area is subject to this type of collapse – it 's very fragile,” Olivari told CNN.

A cemetery in Camogli, Italy fell down a cliff after a collapse. Recovery efforts are underway.

According to the mayor, workers noticed some “signs of fissures” in the area on Saturday as maintenance work has been carried out along the coast. They immediately stopped the work and shut down the cemetery.

As the search operation still continues, civil protection officials say that the recovery of the bodies “will depend on the sea in the coming days.”