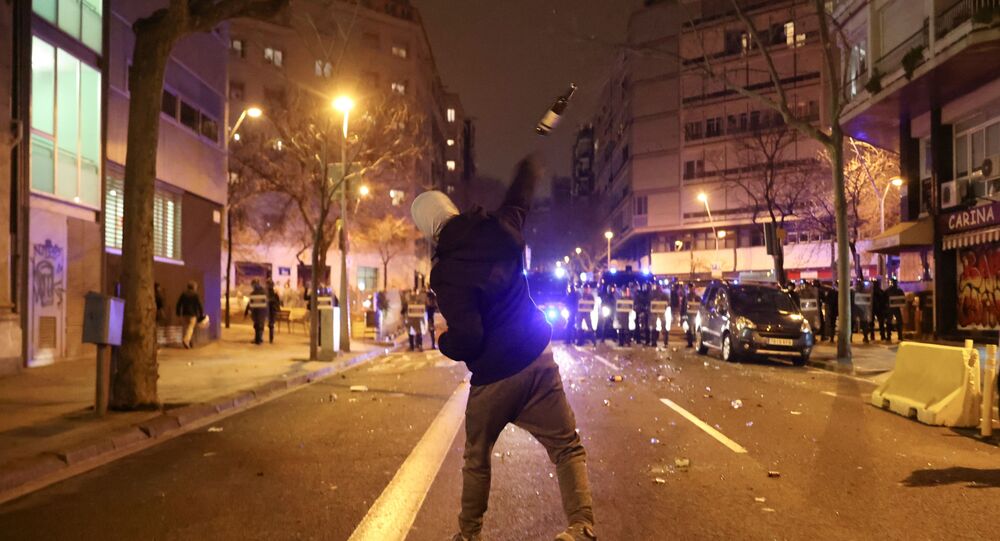 MADRID (Sputnik) – Despite dying down, the protests in support of jailed rapper Pablo Hasel escalated again in Barcelona on Tuesday evening as demonstrators threw glass bottles at officers.

On Tuesday evening in Barcelona, protestors demanding the release of jailed rapper Pablo Hasel gathered in Letamendi Square, where they sang songs and made speeches.

The rally then moved through the city as people called on the authorities to release Hasel and all those detained during the previous round of protests.

Meanwhile, in Artos Square, right-wing activists convened – police put up cordons to prevent them meeting the other set of protestors, who were busy overturning a dumpster and throwing glass bottles, which rained down on officers, the authorities reported on Twitter. A journalist was injured in the unrest, according to the Pais newspaper.

© REUTERS / NACHO DOCE
Protesters Clash With Police in Barcelona, Several Arrests Made - Videos
The angry crowds also made barricades from trash cans as police vans dispersed the crowd. A small faction broke away and headed for Placa de Catalunya.

Two people were injured in the chaos, the ambulance service reported.

Separately, over 300 people gathered outside the Barcelona Sants station to demand the release of a protester from the area. The judge ordered his arrest after he was caught building barricades three times in one evening.

In the city of Vilanova, 25 km from the Catalan capital, protestors threw stones and metal fences at police.

© REUTERS / STRINGER
Spanish rapper Pablo Hasel reacts as he is detained by riot police inside the University of Lleida, after he was sentenced to jail time on charges including insulting the monarchy and glorifying terrorism, in Lleida, Spain February 16, 2021.

Unrest hit Spain last week following the arrest of rapper Hasel on 16 February. The Catalan singer was sentenced to nine months in prison back in 2018 for glorifying terrorism and slandering the Spanish monarchy on Twitter and through his lyrics.

In total, over 100 people have so far been detained, most of whom have already been released. Several people have been injured, including officers and a young woman lost an eye after being shot with a rubber bullet by police.