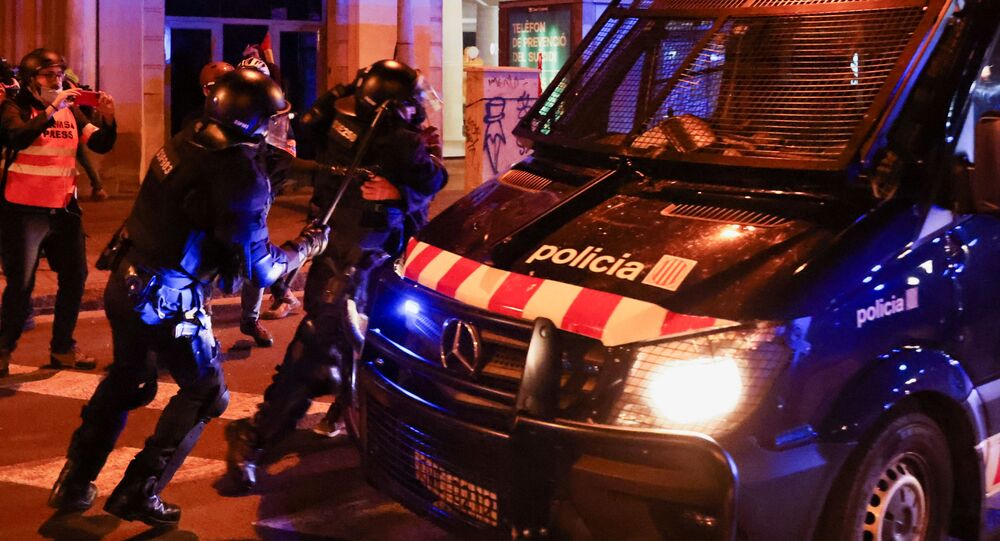 Protesters Clash With Police in Barcelona, Several Arrests Made - Videos

MADRID (Sputnik) - Riots caused by the imprisonment of rapper Pablo Hasel continued for the sixth day in a row in Spain, several arrests were made as protesters clashed with police in Barcelona, Mossos d'Esquadra, the police force of Catalonia, said.

"8 people arrested in Barcelona, ​​5 for robbery in a clothing store and 3 for public disorder and assault on law enforcement officers. There are 7 slightly injured officers and 2 have been taken to hospitals," Mossos d'Esquadra said on Twitter late on Sunday.

According to the Medical Emergency System of the Catalonia Department of Health, 11 people were injured during the Sunday protests, three of the injured were hospitalized.

Earlier on Sunday evening, the police said on Twitter that protesters had set up barricades in the center of Barcelona and there was a fire burning at the music hall (Palau de la Musica).

"There are violent groups throwing stones and bottles at officers," Mossos d'Esquadra said, adding in another tweet that police "arrested five people who had broken the windows of a clothing store on Passeig de Gracia and were stealing from it. During the arrest, an officer was injured."

Hmmm can anyone tell me why foreign investment in Barcelona is decreasing?

In Bilbao, protesters set trash cans on fire and broke shop windows, throwing bottles and other objects at police on Sunday. One person was reported detained.

On Saturday, over 30 people were detained during protests in Barcelona, Lleida and Tarragona. Protesters set up barricades in the center of Barcelona on Saturday and set them on fire. They also set fire to parked motorcycles and mopeds and threw rocks at police. Shops were looted and some notable buildings, including the music hall and the stock exchange, were damaged.

According to the Medical Emergency System of the Catalonia Department of Health, over a dozen people were injured during the Saturday protests (in Barcelona, Lleida, Tarragona, Cubelles). Two of the injured were hospitalized.

EFE Madrid 17 feb. 2021: 19 arrested and 35 police wounded in protest in support of Hasél in Madrid. 3 picemen in the hospital.
EFE Barcelona 21 feb. 2021: A total of 102 detainees and 82 mossos injured in the five nights of riots in Catalonia pic.twitter.com/kgs8sBhCvj

On Friday, at least four people were detained amid the protests (two in Barcelona and two others in Girona), according to Mossos d'Esquadra.

In 2018, Catalan rapper Pablo Hasel was sentenced to nine months in prison for glorifying terrorism and slandering the Spanish monarchy in more than 60 tweets published between 2014 and 2016, as well as in one of his songs posted on YouTube. The rapper was supposed to voluntarily report to prison earlier this month but refused to do so. He was arrested on Tuesday, February 16.