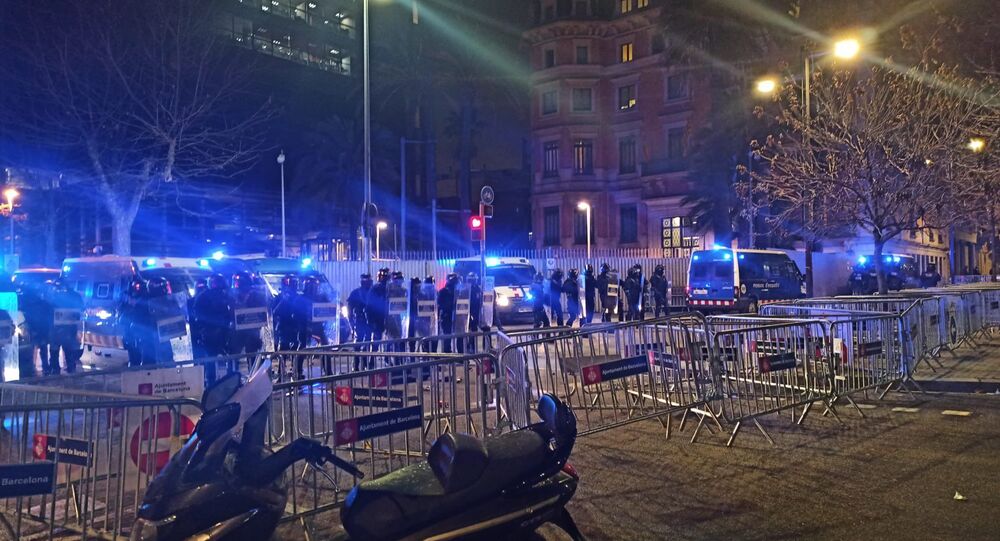 Videos: At Least 14 People Detained During Thursday Protests in Support of Jailed Rapper in Spain

The protests resulted in riots in Barcelona, Tarragona, Girona, Sabadell and Valencia.

Six people were detained in Barcelona, according to the Catalan law enforcement bodies, Mossos de Escuadra. Eight more people have been detained in Valencia, the Periodico newspaper reported.

Several people, including two law enforcement officers, were injured during the riots.

Some protesters built barricades and set them on fire, broke shop windows, pulled out road signs, threw stones and bottles at law enforcement officers. In Barcelona, police resorted to the use of rubber bullets and batons.

This video shows protesters standing on the opposite side of the street from the law enforcement officers in Barcelona.

A video shared on Twitter shows police officers in riot gear go down the metro station, allegedly in pursuit of protesters.

The Catalan singer was sentenced in 2018 to nine months in prison for glorifying terrorism and slandering the Spanish monarchy on Twitter and through the lyrics of his songs. Hasel was supposed to voluntarily come to prison last Friday but he refused to do so. On Tuesday, the rapper was arrested.

The rapper's jailing caused a public outcry and debates about freedom of speech. Hundreds of artists, including Javier Bardem and Pedro Almodovar, have signed a petition against Hasel's imprisonment.