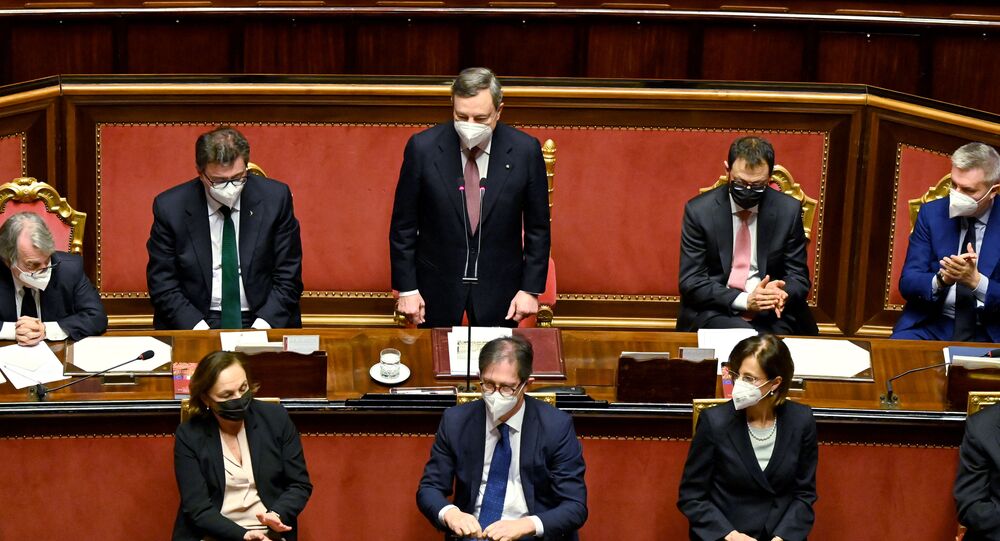 "As for our international relations, this government will be firmly pro-European and Atlanticist, in line with historic ties of Italy: the European Union, Atlantic alliance (NATO), the United Nations. …Our commitment to efficient multilateralism is deep and based on indispensable role of the United Nations," Draghi said at the Senate where the vote of confidence in the new government would take place later in the day.

The prime minister added that Italy would continue to pay particular attention to the relations with the Balkans, greater Mediterranean region, Libya and Africa.

"Italy will work to maintain mechanisms of dialogue with the Russian Federation. But we are watching with preoccupation what is happening there and in other countries where the rights of citizens are often challenged," Draghi said.

The new Italian government should launch a wide reform of the healthcare system, Draghi said.

"Based on our experience of the past months, we need to address to the full extent the issue of a healthcare system reform. The central point is to reinforce regional healthcare systems, create a strong network of basic services, create community hospitals, consulting centres etc," Draghi said at the Senate ahead of the vote of confidence in the new government.

As for the vaccination efforts, Draghi said there was still more to be done, and it had to be done faster.

"We should not limit vaccinations only to specific places that often are not ready yet. We need to use all possible available structures, public and private," the prime minister said.

Quick and efficient delivery of vaccines is one of the main challenges, Draghi said.

"It is necessary to learn also from the countries that acted faster than us by immediately having adequate quantities of vaccines," the Italian prime minister added.

The new Italian government will strengthen the recovery program with a special focus on renewable energy, Draghi said.

"In the coming weeks we will reinforce the strategic dimension of the program [recovery plan], in particular in what regards the objectives relating to the energy production of renewable sources, water and air pollution, fast railways network, production and distribution of hydrogen, digitalisation and 5G communication nets," Draghi said at the Senate.