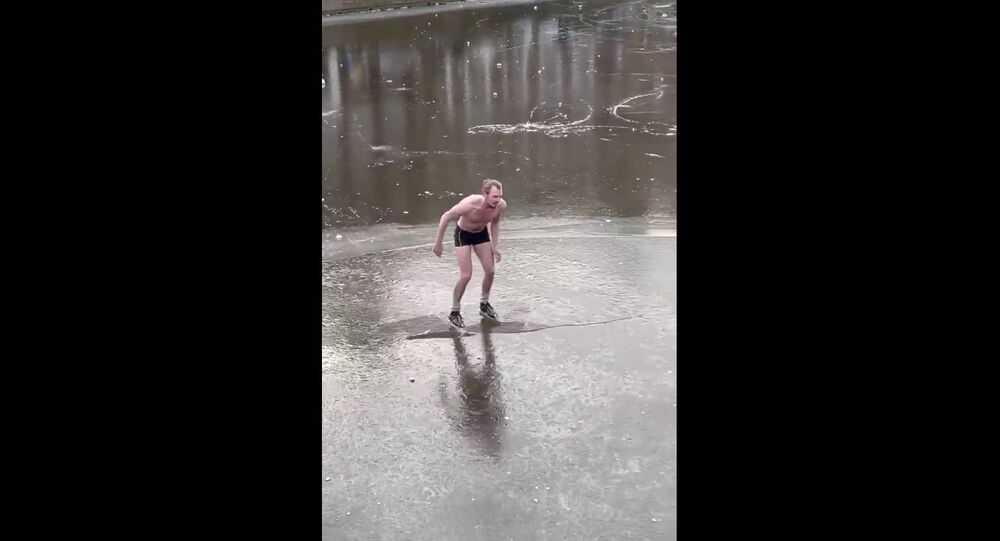 Travel disruptions, power cuts, and cold weather hit the United Kingdom as well other parts of northern Europe as Storm Darcy crashed across the continent from the east over the last week.

Disaster struck one ice skater who decided to test the strength of the Netherlands' frozen waterways. Initially, he seemed to gracefully maneuver the frozen lake, before crashing head-first into the ice.

In footage that went viral after being posted to social media on Sunday, the Dutch skater quickly recovers and signals to onlookers that he is ok.

He is subsequently aided by another skater who throws him a rope. The submerged man then slides on his stomach, before giving a bow to spectators.

​The public was enticed to turn out due to tumbling temperatures across Europe on Sunday, seeing the famous Dutch canals freeze over for the first time in three years.

As Storm Darcy saw the cold reach -5 degrees, the Netherlands' authorities issued a “code red” emergency amid the first snowstorm to impact Holland in a decade.

Dutch Prime Minister Mark Rutte warned against skating on the ice to avoid a potential spreading of Covid-19, arguing that it could lead to injuries that could trigger an influx into pandemic-hit hospital emergency rooms.

Crashing across the top of Europe, the cold temperatures have caused other officials to push similar warnings.

According to the BBC, police helicopters in Berlin told skaters to disband from the ice over the weekend. Similarly, on Sunday two girls were reportedly also saved after falling into the ice on a river in Nottinghamshire.

​As temperatures dropped in Scotland and brought non-stop yellow weather warnings for ice and snow in Edinburgh, talented ice skaters were spotted turning out on the frozen ponds and lakes.

Videos emerged of skaters braving the ice in Inverleith Park on Sunday.