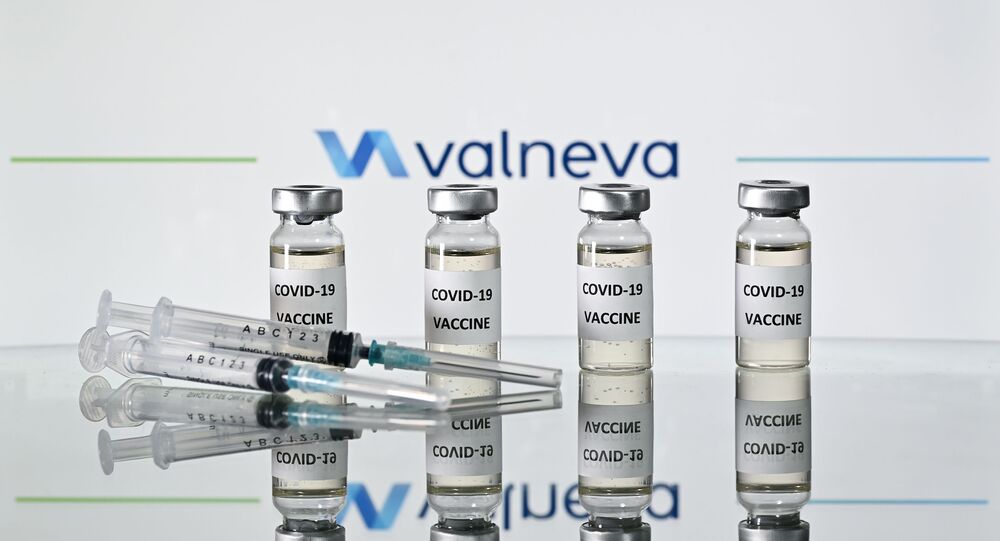 Britain appears to have overtaken its European neighbour in the vaccination drive, even when it comes to a locally produced jab, making the opposition to Emmanuel Macron's government fly off the handle.

A long-standing row over the Macron government's lack of success in ensuring sufficient supplies of coronavirus vaccines for the French people has now embroiled a locally produced inoculation.

As the authorities declined to provide full funding for the pharmaceutical brainchild of Valneva, a Franco-Austrian startup that is based near Nantes, in western France, Britain moved to back the project. The country inked an agreement to secure as many as 60 million doses of the Valneva vaccine, produced in Livingston, Scotland, by as early as October, as compared to 100 million doses of the British-Swedish vaccine by AstraZeneca, the UK's main vaccine provider.

France itself will only get the jab next year, The Times reported.

According to Franck Grimaud, Valneva's chief executive, several governments around the world had been weighed as sponsors for the project, and "the UK responded the fastest".

"In large part no doubt because we already had a base there and also because they believed straight away in our 'inactivated' vaccine. They took all the risks . . . and immediately forwarded €96 million to use before the end of December. It's logical that, under contract, we undertook to deliver to them first", he explained.

The media earlier reported that the UK had offered a total of €470 million for the jab, ostensibly in a desperate effort to put an end to its increased sufferings from the pandemic.

French laws against 100 percent state financing of private firms are believed to have hampered the talks with the company.

The Valneva jab is set to be the first inactivated virus vaccine to be produced in the world. It consists of inactivated coronavirus particles as well as adjuvants - chemicals that strengthen the immune response. To achieve this, scientists grow coronavirus within laboratory-cultivated cells originating from a monkey species. The virus is extracted and chemically inactivated so it cannot reproduce infection. Its structure, however, remains the same, including the spike protein that allows it to enter cells.

The approach is completely different from the other known vaccines, as for instance, the Moderna and Pfizer jabs use messenger RNA technology, whereas a modified chimpanzee adenovirus underlies the Oxford-AstraZeneca inoculation. Russia's Spuntik V, on the contrary, is based on the human adenovirus, which also underlies an earlier effective vaccine against Ebola.

France has faced a barrage of criticism over what has been denounced as its government's lack of action with regard to the vaccination drive. In particular, the conservative, right-wing, and left-wing opposition to President Macron's administration said that the Valneva issue was a symptom of France's failure to back its own research despite the country having long been a vaccination pioneer, thanks to Louis Pasteur.

The National Rally, led by Marine Le Pen, fumed, referring to France's legal obligations as part of the European bloc:

"We are above all paying for the abandonment of our sovereignty in favour of other emerging powers in globalisation".

Last night, French Prime Minister Jean Castex promised that the nation's vaccination drive would be sped up, with an additional 1.7 million vaccine doses to be offered "in the coming days", he said.

Macron, for his part, asserted that by the end of February through early March, the production of COVID-19 vaccines in France will get rolling and there would eventually be four different production centres. He vowed that all French citizens willing to be vaccinated against COVID-19 will be offered a jab by the end of summer.

© AP Photo / Sebastien Bozon
French President Emmanuel Macron, poses with local residents as he arrives to meet police officers during a visit to the police station in the district of Bourtzwiller, in Mulhouse, eastern France, Tuesday, Feb. 18, 2020

The French president also said that a few weeks ago he had sent a group of scientists to Russia to learn more about the Russian vaccine breakthorugh Sputnik V, stating the exchanges were positive, and also referring to data that the shot was effective against COVID-19.

To date, only 1.6 million people in France have been immunised with the first dose of a vaccine, a far cry from Britain and Germany, which have progressed tremendously in the national vaccination race.

France has also been lagging behind in the production of its own vaccine. In particular, the results of phase 1 and 2 trials unveiled in December of the inoculation developed by the French multinational corporation Sanofi proved positive for adults between the ages of 18 and 49, but the immune responses elicited in older subjects were deemed disappointing.

According to Sanofi, a new trial with "an improved antigen formula" is set to begin in February. The third phase is not scheduled to begin before the second half of 2021, however, which shoots back the vaccine's potential availability on the market to the end of this year at best.

France additionally halted joint work with US pharmaceutical firm Merck on a vaccine based on an existing measles inoculation after clinical trial results proved disappointing.