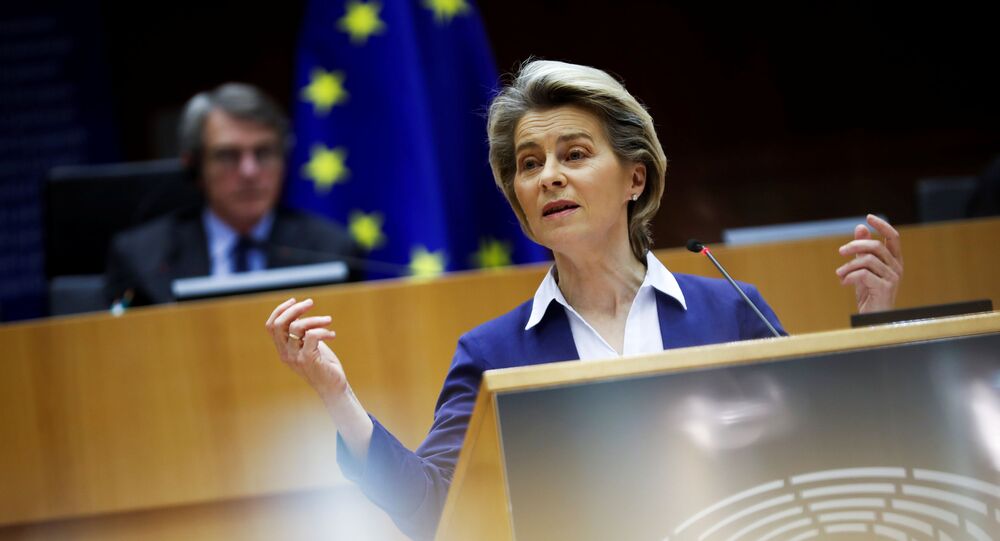 The European Commission has announced that it was going to control the export of any COVID-19 jabs produced in the bloc, including those that could possibly leak to the UK through the Irish backdoor. The decision effectively installed a border on the Irish island, which the EU itself repeatedly pressured London to avoid during the Brexit saga.

European Commission President Ursula von der Leyen is facing growing pressure from EU diplomats to resign following her decision to introduce border checks between the Republic of Ireland and Northern Ireland in a bid to control the flow of coronavirus vaccines produced in the European Union, the Telegraph reports, citing anonymous sources in Brussels.

The plan was announced on Friday in the midst of the growing EU-UK vaccine row, as the bloc officials and the World Health Organisation were urging London to provide the world with access to COVID jabs amid the union’s delayed vaccination efforts. But the EC’s decision, which effectively undermined the Irish Protocol – the one Brussels repeatedly pressured London to follow – caused an outrage among officials in Northern Ireland, the UK and the Republic of Ireland. It was eventually dropped shortly after its announcement.

But the EU Commission chief’s decision to go on with the proposal, reportedly without support from top advisors or any formal notification sent to London or Dublin, has put her in hot water with her own employees, who accused von der Leyen of carrying out a vendetta towards the UK government following Brexit.

“You know who is in charge of COVID policy at the moment. She is getting increasingly vindictive because of this Brexit thing,” one insider told the Telegraph when asked about who had pushed for the much-decried Irish border proposal. The source added that von der Leyen remains the one who has been personally overseeing the union’s vaccination efforts in the past days.

Another EU diplomat said that the situation has put the Commission president in jeopardy with her own advisers and undermined confidence in the official’s abilities to predict the outcry the decision could have caused.

“She needs to go. Now. She told f*****g no-one. After four years of tedious skull-duggery over the backstop. Surely the commission could have thought of the optics?” the diplomat raged, adding that the regulator “is quite successfully undermining its own credibility on the rule of law.”

“Do they really think this will improve their credibility as contract negotiator? It’s not like you couldn’t see this coming…Was there no one to protect her from going here? Everyone has just gone stark raving mad,” the source, who chose to remain anonymous, added.

Another person in EC, however, rushed to add that there was nothing “personal” about the Irish proposal that was apparently greenlighted by the Commission’s Directorate-General for Trade, headed by Sabine Weyand, someone highly familiar with the sensitive Irish border issue and the pledge not to install any custom checks between the two countries.

“This was all about health, not trade, so there’s no point blaming trade officials. No-one in DG Trade [Commission’s Directorate-General], including Weyand, liked it, but on the health side they were worried about the vaccine leaking into the UK via Ireland,” the person said.

The spokesman for President von der Layen declined to comment “on internal drafting and decision-making processes in the Commission” when approached by the media.

The reports come as EU Commission President Ursula von der Leyen is also facing scrutiny over delays in vaccination efforts around the bloc, where less than 2% of the population have received the COVID jabs, in comparison with the UK, where 8 million people, more than 10% of the population, have already been vaccinated.

The slow process has been blamed on von der Leyen’s mismanagement of the vaccine rollout and failure to secure more precious jabs with the producers. The official herself accused the pharmaceutical companies, primarily British-Swedish company AstraZeneca, for breaching their contractual obligations for the delivery of doses.

© REUTERS / Stefan Wermuth /File Photo
FILE PHOTO:The logo of AstraZeneca is seen on medication packages in a pharmacy in London.

AstraZeneca, which has developed the COVID vaccine in partnership with Oxford University, announced this month that it would reduce its projected supply of 300 million doses plus an optional 100 million to the EU by approximately 60% due to technical issues at its Belgium plant. Following von der Leyen’s outrage and calls to divert the production from the company’s British factories to supply the EU with promised shots, the company maintained that the set number was just a “target” and not a “promise.” AstraZeneca said that it was not planning to breach its separate contract with London on the deliveries of vaccines.

© REUTERS / DINUKA LIYANAWATTE
AstraZeneca Contract Belies EU Claim on UK-Made COVID-19 Vaccines
As the redacted version of the EU-AstraZeneca contract was published by the Commission on Friday, revealing that the company has indeed said that it would commit its “best efforts” to deliver 100 million doses of the vaccine in the first quarter of 2021, the media rushed to target von der Leyen for the alleged incompetence on the issue.

"She either told an intentional lie to the 447 million citizens of Europe or she didn't know what was in her own contract," Berlin-based Bild tabloid wrote, blaming von der Leyen, the former German Defence Minister, for the growing vaccine crisis in the EU.