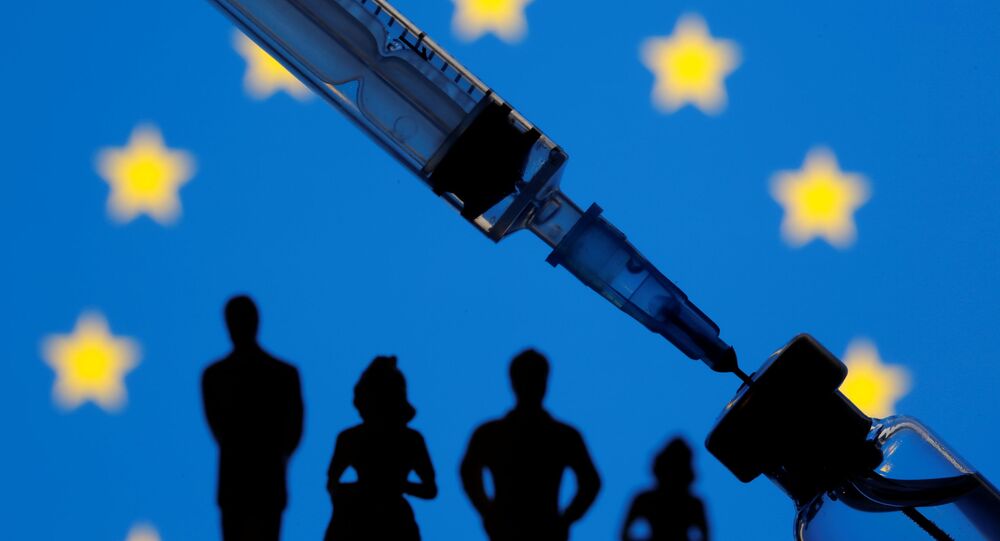 The UK and the European Union have been locked in a dispute over the distribution of a vaccine manufactured by the British-Swedish company AstraZeneca and Oxford University, as Britain has been ramping up its sweeping inoculation programme, while the EU bloc deals with shortages and setbacks in its anti-COVID roll-out.

The UK is prepared to offer a helping hand to the European Union as the bloc struggles to fix its COVID-19 vaccine supply issue, in what is seen as a conciliatory gesture after Brussels U-turned on its threats to block jab supplies at the border.

The focus is now shifting towards "collaboration" with the EU, Nadhim Zahawi, Britain’s Minister for COVID-19 Vaccine Deployment at the Department of Health and Social Care, was quoted as saying by The Telegraph.

The official added that the UK has gone "out of our way" to help beleaguered Brussels with its vaccine production challenges and "will continue to do so".

The announced move by the British government comes amidst a diplomatic row that has been gathering steam of late over vaccine exports. As the UK launched its sweeping inoculation programme, aiming to vaccinate no fewer than 14 million people in the four most vulnerable population segments by 15 February 2021, the European bloc has been under fire for delays in its anti-COVID roll-out.

Health Secretary @MattHancock tells @skygillian that the UK has 100 million doses of the Oxford/AstraZeneca vaccine on order and the roll out will begin on 4 January.

​The problems were triggered by reported delays at the British-Swedish company AstraZeneca’s Belgium plant and other technical difficulties Pfizer has been experiencing while trying to scale up production.

​On Saturday, tensions were brought down a notch after Brussels backtracked on its earlier threats to prevent supplies of the Pfizer jab, produced at the pharmaceutical giant’s Belgium plant, from reaching Britain by imposing a ‘vaccine border’ on the island of Ireland.

However, ahead of the reversal of Brussels’ plan to impose controls on exports from Europe and invoke Article 16 of the Northern Ireland Protocol, UK ministers had been forced to draw up a covert retaliatory plan to protect Britain's vaccine supplies, writes the outlet.

A six-page document had been hurriedly assembled amid the crisis, according to sources, that presupposed measures ranging from extending a six-month grace period on health checks for chilled meat products imported into Northern Ireland from the UK to threatening legal action against the European Commission.

"There were a variety of things set out that were not needed. Things moved very rapidly. There was a paper drawn up with actions to respond, but thankfully it all got stood down," a Government source was quoted as saying.

As diverse options were said to have been weighed, a senior Downing Street source was cited as saying nothing was committed to paper at the emergency meeting.

"There was a conversation around 'if we need to do something in response, what should it be?'" said the source.

The White House reportedly voiced its concerns over the EU's export controls on Friday, with members of President Joe Biden's team seeking clarification regarding potential fallout for deliveries to the US.

On Saturday, Brussels moved to back down from its decision to trigger Article 16 of the Northern Ireland Protocol and impose export controls on vaccines that threatened the fate of a shipment of 3.5 million Pfizer doses to Britain.

According to Cabinet Office minister Michael Gove, the EU had 'recognised they made a mistake', after the bloc faced condemnation from London, Dublin and Belfast over the proposed move.

“I think the European Union recognises that they made a mistake in triggering Article 16 which would've meant the reimposition of a border on the island of Ireland. But now the European Union has stepped back,” Gove was quoted by Sky News as saying.

🔴 Vaccination rates in the UK and the EU

​He added that after the conversation between Boris Johnson and Ursula von der Leyen ministers expected vaccines manufactured by Pfizer and AstraZeneca to be supplied to the UK according to previously-determined plans.

"The Prime Minister was very clear, we've entered into contractual arrangements with AstraZeneca and Pfizer and we expect those arrangements to be honoured. And President von der Leyen was clear that she understood exactly the UK government's position so we expect that those contracts will be honoured, we expect that vaccines will continue to be supplied,” said Michael Gove.

Gove also added that the UK government would work with the EU to make sure the bloc’s problems ‘can be tackled’.