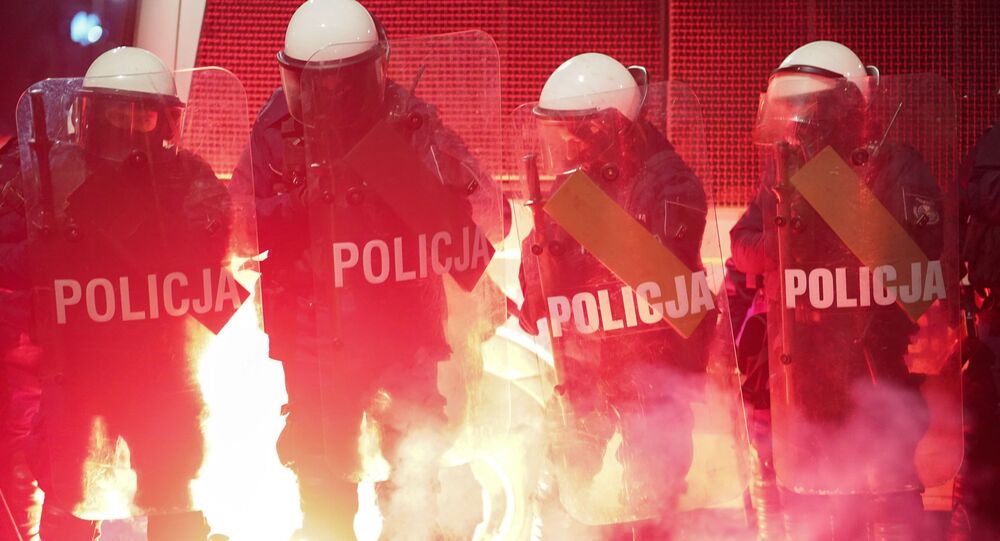 In 2020, the Constitutional Court of Poland reduced the number of allowable reasons for a woman to receive an abortion. A developmental fetal defect is no longer permitted to be used as legal justification to terminate a pregnancy. The ruling, which came into force on 27 January, is opposed by many in the nation, including women’s rights activists.

On Friday, thousands of Polish protesters flooded the streets of Warsaw and other regions of the country, to oppose the tightening of abortion laws in the European country.

Organizers of the protests are members of the Strajk Kobiet (“Women's Strike”) movement, and demand the resignation of the government and the departure of Jaroslaw Kaczynski, the leader of the ruling Law and Justice party in Poland.

Numerous strikes throughout Poland began on Wednesday evening. Late at night on Friday protests were held in the capital, where several thousands of protesters crowded the Warsaw city centre, blocking nearby streets.

Demonstrators lit firecrackers and, reportedly, explosives, chanting: "Abortion at will" and "Hands off my body." They also used cans of paint and glue to attach themselves to government buildings.

The transparents here tell a lot: “I will give birth to a leftist for you.” Says this one. #StrajkKobiet #Polska pic.twitter.com/f73dOdk49O

The police several times blocked the demonstration with cordons, but protesters split into smaller groups to bypass the temporary barriers.

Polish police arresting feminists and their LGBTQ+ allies last night in Warsaw as they came out to protest against the new near total ban on abortion that came into effect yesterday. #Winning pic.twitter.com/TSpbPSOiJO

Law enforcement used tear gas against demonstrators, including one of the leaders of Strajk Kobiet, Marta Lempart.

The police, through loudspeakers, called on the mob to disperse, claiming the dangers of the ongoing coronavirus pandemic, particularly as mass gatherings in the republic are currently prohibited.

In October 2020, Polish authorities announced their abortion ban covering any instance in which fetal pathology would not threaten the woman's life or health, leaving abortion in the nation legal in cases of rape or incest. The Polish Constitutional Court ruled at the time that this ruling was in contradiction of the country's fundamental laws.

Some Polish members of parliament subsequently asked the court to study the issue, claiming that eugenic abortions violate the rights of human life, citing Article 30 of the Polish Constitution, saying “human life has value in every phase of its evolution, and as a value, the source of which is in the constitutional laws, it should be protected by lawmakers.”

Abortions in Poland are legal only if the pregnancy threatens the life or health of the woman, or if it is the result of rape or incest.