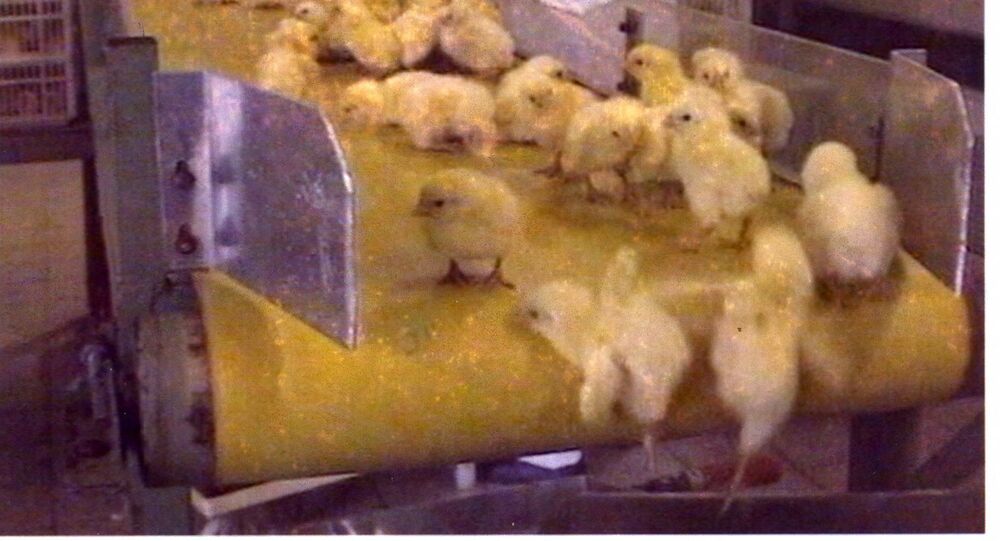 The German government last week approved a new law which would ban the culling of live male chicks in the egg industry. But Compassion In World Farming say although it welcomed the legislation, poultry farming in Europe needs far wider reforms.

France has also committed to outlawing the culling of male checks from the end of this year and Switzerland banned shredding last year, but still allows them to be gassed. The British government is still considering its position.

​Catherine Jadav, from the campaigning group Compassion In World Farming (CIWF), said while the ban was a "good solution" wider changes are needed in European poultry farming.

Ms Jadav said: "Up until only a few decades ago, egg farmers would keep male chicks and feed them up and eventually slaughter them for meat. But then, as we began to eat more meat and eggs and the industry intensified they began selectively breeding and farming chickens intensively."

© Photo : CIWF
A broiler chicken, the product of intensive breeding, struggles to stand up

Poultry farmers began selectively breeding broiler chickens - which are both male and female - which would gain large amounts of breast muscle and can be slaughtered for meat after just five weeks.

"But that created welfare issues. They grow so quickly that they suffer heart failure and their legs and bones cannot keep up. Now you have these top-heavy broiler chickens which struggle to walk and often just sit in their own excrement," Ms Yadav told Sputnik.

She said: “The male chicks from the egg industry are just uneconomic. They don’t grow fast enough or provide enough meat to supply the demand for large quantities of cheap chicken that we have become accustomed to. So they are killed as soon as they are sexed.”

​Tens of millions of male chicks are culled in Germany every year, either shredded while still alive in a machine called a macerator or gassed.

Animal welfare activists have long campaigned to end the practice but farmers have complained about there not being an affordable alternative.

© Photo : CIWF
Male chicks go into a macerator and are shredded while still alive

Ms Kloeckner said: "We have invested millions of euros in alternatives, bringing animal welfare and economic efficiency together on German soil."

The German firm has developed a technique which involves using a laser to make a hole and extract liquid from the egg and then testing it for the female hormone.

Who among my non-vegan followers knows what this is and why it’s happening? 🐥 #vegan #mondaythoughts #govegan #vegetarian #MeatyMarch pic.twitter.com/P7gMGUebJO

​Ms Kloeckner said she wanted Germany to "set the pace and be a role model for other countries."

But the European pressure group Foodwatch says the move does not go far enough.

Martin Ruecker, executive director of Foodwatch, said: "If only the cruel practice of killing chicks in Germany is ended, this will change absolutely nothing about the unbearable suffering of laying hens."

Ms Jadav said few consumers were aware of the suffering endured by animals in the poultry industry.

© Photo : CIWF
A broiler chicken, the product of intensive breeding, struggles to stand up

She said not only did broiler chickens suffer terribly but modern selectively-bred hens do too; they often develop chronically weak bones because so much calcium goes into egg production, meaning they suffer fractures very easily.

CIWF has urged farmers to use dual-purpose breeds, which lay fewer eggs and produce less meat but have far less welfare issues.

Companies like Kipster, a Dutch firm, use chickens to produce eggs in a high welfare system.

Instead of culling male chicks Kipster keep them alive and grow them for 17 weeks before slaughtering them for meat.

Kipster also claims to produce carbon-neutral eggs and explains that it does this by using various methods, including solar-powered henhouses and feeding the birds with leftovers from bakeries.

Ms Jadav said that while a ban on culling male chicks is one welcome option, the key to change is addressing welfare problems at their root cause by breeding healthier animals. This requires shoppers to also support industry by choosing to buy less but better-quality meat and eggs