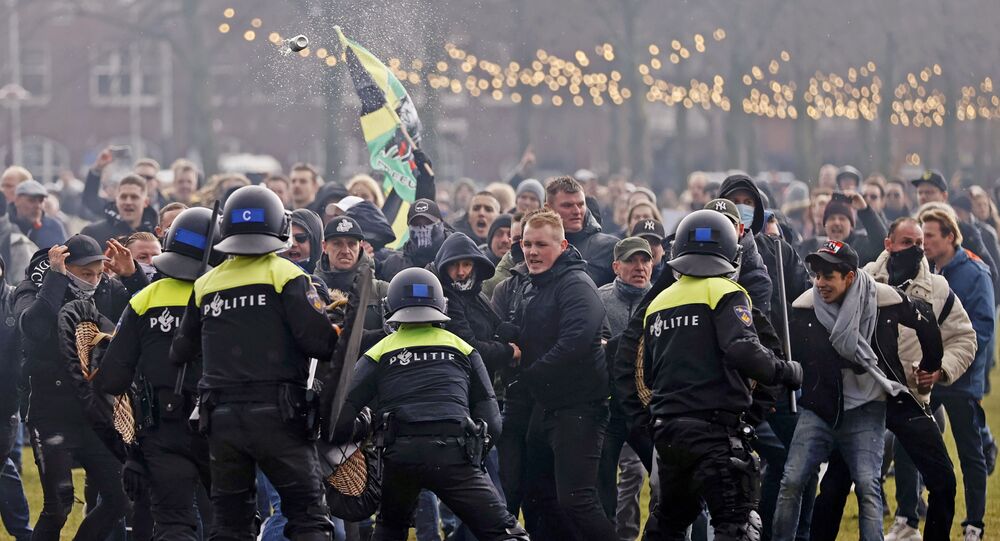 The development comes as the Netherlands witnessed a third night of violent protests against a national curfew, with demonstrators overturning cars, smashing windows, looting shops, and clashing with police. 81 people were detained on Tuesday night in Rotterdam, the Netherlands’ second-biggest city.

Belgium's Interior Minister Annelies Verlinden has voiced concern that the violent protests in the Netherlands over coronavirus restrictions may provoke similar riots in her country. Verlinden made the remark during a meeting with city authorities, where she told them how to limit the spread of the virus during any potential protests.

Her statement came as some Belgians on social media were calling for protests against the lockdown and curfew, which were imposed to limit the spread of the infectious disease. Users were talking about holding a protest at a landmark in the Belgian capital Brussels on Sunday, 31 January.

"The violent demonstrations that degenerated in the Netherlands have apparently incited certain people to call, also in our country, for demonstrations against the health measures", Belgian Interior Minister Annelies Verlinden's office said.

Verlinden told mayors that they should prevent any unauthorised protests, noting that demonstrations that are approved by authorities should not involve more than 100 people. Participants must wear masks and maintain social distancing. She said that if necessary, officials can count on police reinforcements.

Speaking to reporters, the interior minister said she hoped that riots wouldn’t break out in the country, but noted that one should expect the unexpected.

"But it's better to be proactive. We've read the messages on social media networks. We have to avoid that happening here", Verlinden said.

What is the Situation in the Netherlands?

The neighbouring country has seen a third night of violent protests, albeit significantly calmer, something that was attributed to the high presence of law enforcement and the deployment of military police. Nevertheless, clashes with police were reported in Rotterdam and other cities, with demonstrators smashing windows, looting shops, and throwing Molotov cocktails. 10 police officers were injured in Rotterdam and 81 people were arrested.

#Dutch towns and cities have witnessed another night of rioting as groups of youths went on the rampage and confronted police defying the nation's strict #COVID curfew measures.#netherlandsprotest #Netherland pic.twitter.com/yt1kPfGOj1

​An explosion tore through Osdorp, a suburb of Amsterdam, on Tuesday night during a protest. No casualties were reported as a result of the blast.

​In all, 131 people were arrested on Tuesday night, a day after law enforcement detained almost 200 people.

During the previous protests, demonstrators overturned cars and set them on fire and aimed fireworks at police officers. In the municipality of Urk, protesters set a coronavirus testing centre on fire.

The riots began after Dutch authorities introduced a national curfew from 9 pm to 4:30 am in order to prevent the spread of a new strain of the coronavirus that was discovered in Britain, which scientists say may be up to 70 percent more contagious and is reportedly more deadly. The curfew was introduced in addition to the existing lockdown.

Belgium has a similar coronavirus situation. The government has extended its lockdown, with only essential shops – grocery stores, pharmacies, and post offices – being open. Wearing masks is mandatory and public gatherings are limited to four people. A night curfew is also in place.