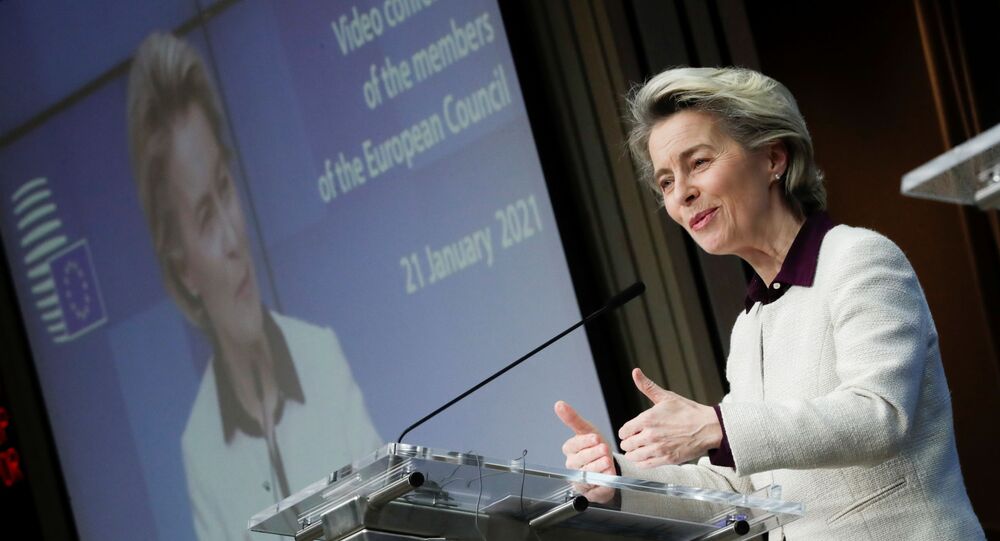 The European Union's policy of centralised approval and procurement of COVID-19 vaccines has seen the UK, which left the bloc last year, race ahead with its own immunisation programme using a mix of the Pfizer and AstraZeneca jabs.

The European Union's (EU) top official has warned the bloc wants payback for the billions it "invested" in COVID-19 vaccines — and will now scrutinise all exports.

In a video address on Tuesday, European Commission President Ursula von der Leyen claimed "Europe" had funded development of vaccines such as the Pfizer-BioNTech jab for the "global common good" — but now Brussels "means business".

She said a "vaccine export transparency mechanism" would be set up to regulate sales to countries outside the bloc.

​That came after European Commissioner for Health Stella Kyriakides tweeted on Monday that all firms making vaccines in the EU would have to tell Brussels in advance of any plans to export them to non-EU nations. Pfizer's main production facility for its jab is in Belgium.

​Russia and the UK, two European nations outside the EU, have developed the Sputnik V and AstraZeneca coronavirus jabs. Both are in widespread use worldwide despite the European Medicines' Agency (EMA) not licensing them for use in the 27 EU member states.

Von der Leyen's anxiety over COVID shot exports may have been driven by criticism of the slow roll-out of the EU's immunisation programme compared to the UK, which departed the bloc a year ago and ended the post-Brexit transition period on December 31.

The UK, with a population of under 67 million, has administered 7 million coronavirus vaccine doses, while the 27 EU nations, with almost 450 million inhabitants between them, have given just 9 million. The AstraZeneca jab has far less-stringent storage requirements than Pfizer's, which must be kept at -70 degrees centigrade — severely limiting the number of facilities equipped to inoculate patients with it.

Meanwhile rumours swirled through the media that the EMA had decided to reject British firm AstraZeneca's application for its Oxford vaccine to be approved for use in the bloc.

German newspaper Handelsblatt reported on Monday that clinical trial data showed the jab was only eight per cent effective in elderly patients. The German health ministry was quick to scotch that claim, saying the paper had confused the proportion of test subjects between 59 and 69 with the effectiveness.

"At first glance, it seems that two things were confused in the reports: Around eight percent of the subjects in the AstraZeneca efficacy study were between 56 and 69 years of age, and only 3 to 4 percent were over 70 years of age," the ministry's statement said. "From this, however, an effectiveness of only eight percent in older people cannot be derived."

A British government source was more succinct however, telling the MailOnline the German report was simply "rubbish".

© REUTERS / Dado Ruvic/Illustration/File Photo
UK Vaccine Minister Says He's Confident EU, Britain Will Receive Pfizer, AstraZeneca Vaccines
ITV political editor Robert Peston claimed to have the lowdown on the EU-UK row. He tweeted that a core group of EU countries — Germany, France, Italy and the Netherlands — organised as the 'Inclusive Vaccine Alliance' had placed orders with the UK firm last June. But the EU Commission overruled that agreement, insisting that it must control procurement for the entire 27-nation bloc.

And Nigel Farage, leader of the Reform Party — formerly the Brexit Party — could hardly miss the opportunity to cite the Commission's controls on vaccine exports vindicated Britain's 2016 referendum vote to leave the EU.

Italy to Sue Pfizer For Delays in Supply of COVID-19 Vaccines, Report Says