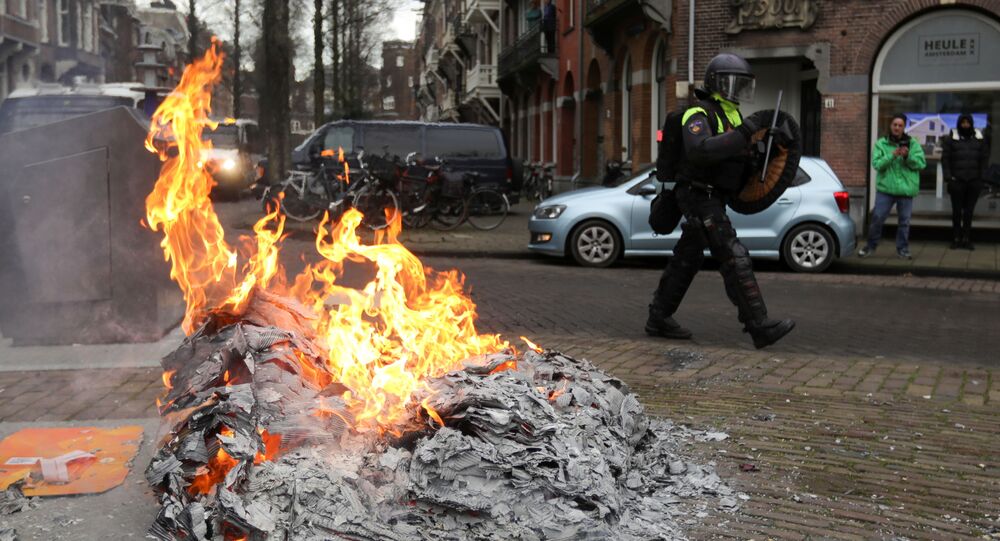 Police have said that almost 200 people were arrested on Sunday following violent protests, during which demonstrators set cars and bikes on fire, smashed windows in buildings and looted shops. In the municipality of Urk protesters set a coronavirus testing centre on fire.

The Dutch government will not bow to "scum" rioters, the country's Finance Minister Woepke Hoekstra has said.

"You don't capitulate to people who smash shop windows. That is not the case", Hoekstra was quoted as saying by the Dutch news agency ANP.

The minister emphasised that the government does not plan to lift the curfew, which will be imposed until 9 February. "We are not going to capitulate before a few idiots", Hoekstra told local media.

Violent protests occurred in several cities over the weekend after authorities introduced a national curfew – the first since the Second World War – to stop the spread of coronavirus. Initially peaceful, the demonstrations quickly turned into riots, with people flipping over cars and setting them on fire. Protesters also clashed with police officers throwing golf balls and aiming fireworks at them. Police had to use tear gas, water cannons, and dogs to disperse the crowds.

Protests against COVID-19 lockdown measures in the Netherlands turned into riots in several cities. pic.twitter.com/9Yt4tbEYYJ

Another video of the #NetherlandsProtest ....it's the fireworks for me...🤣🤣🤣🤣 pic.twitter.com/74htXQV9CA

M​ayor John Jorritsma of the country’s fifth-largest city, Eindhoven, said if the nation continues to go "down this path", the Dutch will be on their way "to civil war", while Prime Minister Mark Rutte said the violent actions had nothing to do with a protest. "This is criminal violence and we will treat it as such", Rutte told reporters outside of his office in The Hague. Finance Minister Woepke Hoekstra used less official language. "Scum does this", he said commenting on the riots.

What is the Situation With Coronavirus in the Netherlands?

Compared to Britain, Italy, Spain, and France, the Netherlands managed to contain the outbreak of COVID-19. During the peak of the first wave, the country recorded more than a thousand cases a day. Unlike their neighbours, Dutch authorities resisted introducing draconian measures like the mandatory wearing of masks or strict lockdowns, arguing that members of the public are rule-abiding individuals, who don’t need to be treated like children.

This stance was discarded in autumn, when cases started growing, which prompted authorities to close pubs and restaurants. After a brief "respite" in November, cases again began to grow. This time, the government introduced a five-week lockdown, which began in the middle of December. But after a new strain of coronavirus, 70 percent more infectious and reportedly more deadly, was discovered in Britain, authorities decided to introduce a curfew from 9 p.m. to 4:30 a.m.

"The aim of the new measures is to reduce the current infection rate, delay the spread of the original and new coronavirus variants, and prevent the new variants’ entry into the Netherlands as much as possible", the government said in a statement announcing the news.

Authorities also banned flights from Britain, South Africa, and South America. At the time of writing, the Netherlands has registered more than 966,000 coronavirus cases and nearly 14,000 have people died from the disease since the outbreak began.