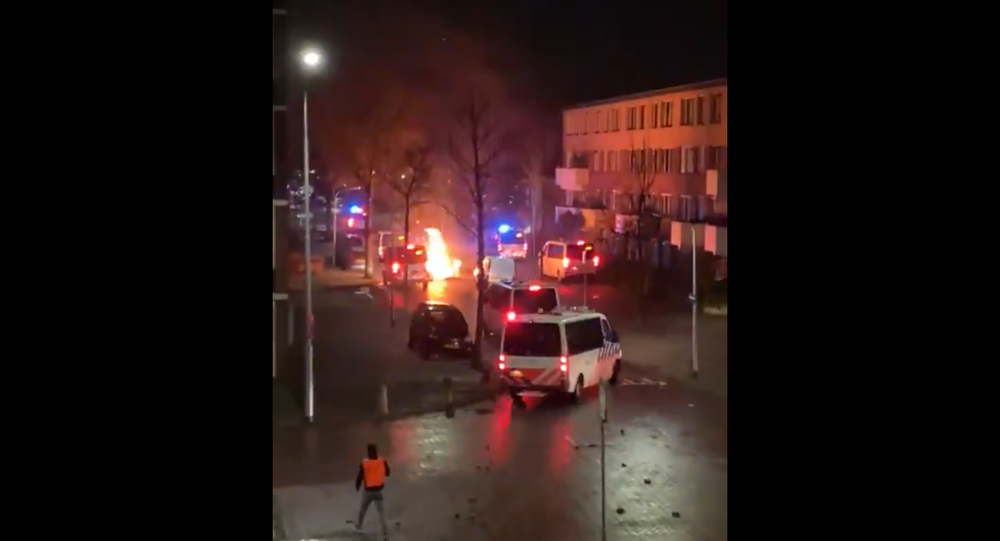 The first day of protests that followed the introduction of a curfew during the ongoing coronavirus-related lockdown in the Netherlands saw about 200 people detained by police, as some demonstrators reportedly threw firecrackers and clashed with officers.

Anti-lockdown protests in the Netherlands entered a second night after beginning on Sunday, with some demonstrations evolving into riots and looting.

Violent demonstrations occurred in several Dutch cities on Monday, particularly in Rotterdam, Haarlem, Den Bosch and Geleen. Protesters were caught on camera destroying public places, smashing cars and throwing bikes, while also throwing firecrackers and even attempting to explode vehicles on the streets.

Crowds of young people flocked the streets of Dutch cities as the government announced a coronavirus-related curfew, prohibiting citizens from going out from 9 p.m. until 4:30 a.m., local time.

In the Dutch capital, according to the police, 9 people were arrested in the protests.

Dutch News reported that at least 70 people had been detained across the country, citing police chief Willem Woelders. According to the report, police used tear gas to disperse crowds.

"Things were relatively quiet until 7.30pm, but then all hell broke lose", Woelders told current affairs programme Nieuwsuur, according to the outlet.

In the city of Den Bosch, rioters were filmed looting stores, running through the streets and turning a car over while striking it.

​According to video posted in social media, crowds of rioters were seen in Haarlem, as protesters erected barricades. One video shows an explosion that allegedly took place in Schalkwijk district of the city.

​Big groups of protesters were also allegedly filmed in the city of Geleen, marching through the streets.

Migrant gangs out rioting and looting tonight in the city of #Geleen, #Netherlands tonight. The riots/looting is taking place across the country. #avondklokrellen 🇳🇱🇳🇱🇳🇱 pic.twitter.com/dvzdXk2F9e

Another video allegedly taken in Rotterdam showed rioters looting a phone store. Also, footage showing someone throwing an explosive into a vehicle has emerged.

​Footage filmed in other cities also revealed firecrackers exploding in the middle of the street, rioters shaking cars and streets engulfed in flames. In several cities, law enforcement officers were brought in to tackle the situation.

Netherlands: Riots and looting across Holland again tonight as rioters take advantage of the anti lockdown protests over the weekend. pic.twitter.com/EHaeEJXxtL

Netherlands: Riots and looting across Holland again tonight as rioters take advantage of the anti lockdown protests over the weekend. pic.twitter.com/r2hxzi1raS

The curfew that is said to have sparked the protests was introduced in the Netherlands on 23 January, after an almost full lockdown was imposed in mid-December 2020.

According to Johns Hopkins University data, there are over 966,000 coronavirus cases registered in the Netherlands, with more than 16,000 related deaths.