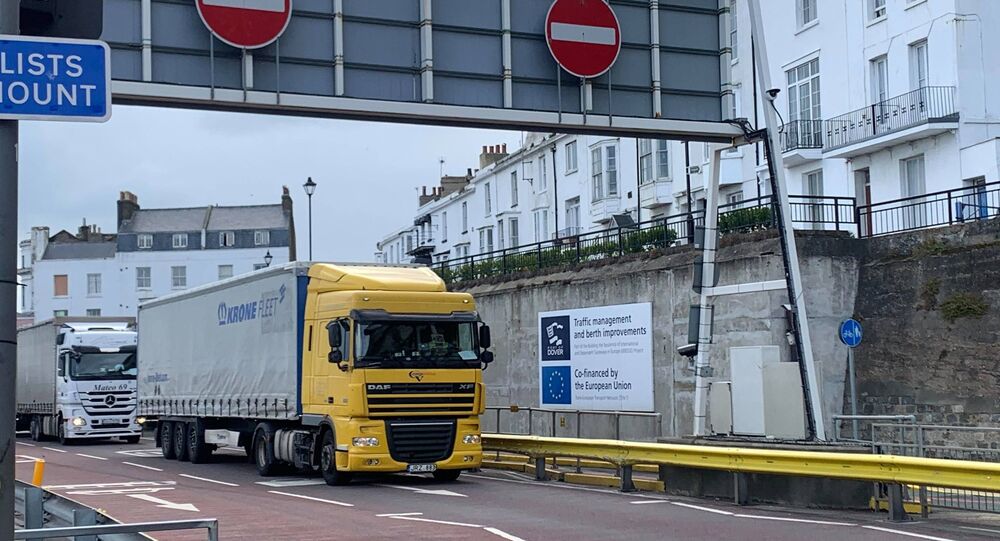 Earlier reports said that companies exporting to the European Union were under pressure as they grappled with new border controls, import taxes, and additional customs paperwork post-Brexit, with turnaround and transit times impacted.

UK businesses that have been drowning in Brussels’ red tape after Brexit are being encouraged by government trade advisers to set up separate companies in the European Union to escape extra charges, paperwork and taxes, reported the Observer.

The Department for International Trade (DIT) advisers are claimed to be suggesting that the best way to sidestep border issues and VAT problems that have materialised since 1 January is to register new firms within the EU single market.

From these European 'bases', the businesses might be in a better position to distribute their goods with greater freedom.

The heads of two UK firms have ostensibly decided to act upon the advice received, says the outlet, and intend to register new companies in the EU in the next few weeks. The bosses have also claimed that many other struggling businesses have also received such recommendations from government officials. According to the outlet, the decision to register operations in the EU is being considered by an increasing number of firms.

‘Investing in EU to Survive’

Andrew Moss, Managing Director of Horizon Retail Marketing Solutions, based in Cambridgeshire, has acted upon the advice and is now registering a European company, Horizon Europe, in the Netherlands in the next few weeks. According to Moss, while the motto of Brexit might have been all about ‘wresting back control’ from Brussels, it was now about ‘investing in the EU to survive’.

© AFP 2021 / Philippe Huguen
A member of the UK Border agency stands at the entrance of the Channel Ferries in Calais, northern France, on January 27, 2009 .

The firm, which sells packaging and point-of-sale marketing displays in the UK and to EU customers, will be forced to lay off a small number of people in Britain while hiring additional staff in the Netherlands.

When asked about the recommendations ostensibly received from a senior DIT adviser on trade, Moss said:

“This guy talked complete sense. What I said to him was, have I got another choice [other than to set up a company abroad]? He confirmed that he couldn’t see another way. He told me that what I was thinking of doing was the right thing, that he could see no other option. He did not see this as a teething problem. He said he had to be careful what he said, but he was very clear.”

The managing director of Stewart Superior Ltd, a company which sells office supplies to UK and continental customers, also had the Netherlands tapped as a likely destination to solve the post-Brexit hassle.

Geoffrey Betts claimed an official at the Department for International Trade had similarly advised him to register a company in the EU.

“When the government said it had secured free trade, it was obvious it was nothing of the sort,” said Betts, lambasting the “administrative nightmare” of VAT issues, new charges on moving goods and more red tape.

Businesses that decide to follow suit and ship out large consignments from the UK to their newly-established European operations can potentially sidestep cross-border delays, extra costs, and VAT problems impacting both them and their European customers.

The Department for International Trade has not offered an official comment on the report.

Despite the much-lauded Christmas Eve tariff-free trade deal truck by Brussels and London, UK exporters have been inundated with challenges such as the necessity of filling out extra paperwork, in order to comply with rules regarding origins, VATs and health checks before they are able to deliver their products to the continent.

Downing Street release photos of the moment the deal was finally done between Boris Johnson and Ursula von der Leyen. A moment in history, however you feel about it. pic.twitter.com/LsLlUkNlQ1

​The deal had sealed the UK’s exit from the bloc and avoided resorting to potentially ‘damaging’ World Trade Organisation trading terms.

However, post-Brexit rules may cost British exporters up to $34 billion in 2021 due to weak demand and excessive bureaucracy, stated a recent report by Euler Hermes Group SAS, a trade insurance company.

The post-Brexit situation is no less complicated in Northern Ireland, which has faced food shortages and disruptions of supplies from Britain, as getting goods across that border has involved a range of new processes and documentation.

The UK government has been dismissing the challenges cited post-Brexit as teething problems that can be overcome.

Will the City of London Remain Europe's Main Financial Centre After Brexit?