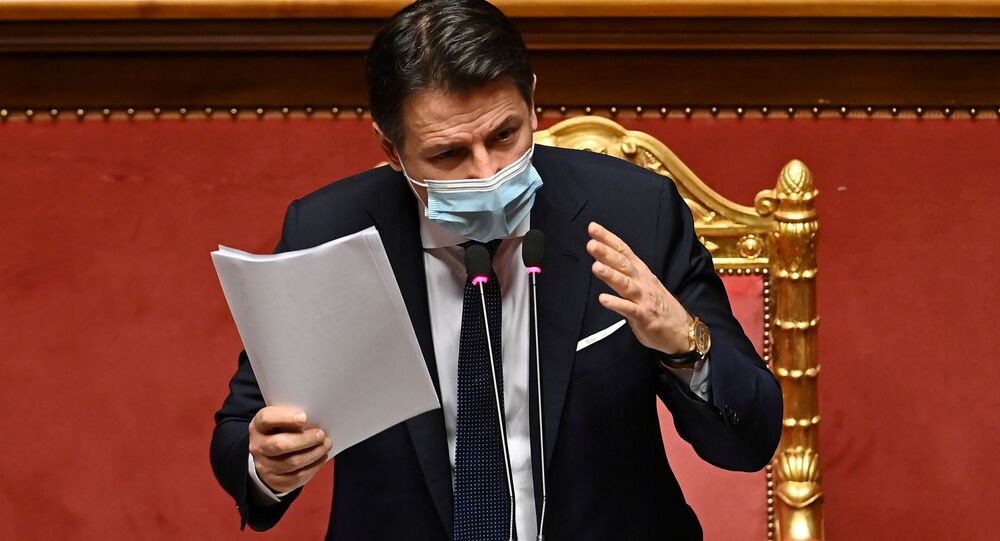 On Monday, Giuseppe Conte claimed that he sees no "plausible foundation" for the political crisis in Italy as he won a crucial vote in the parliament's lower house to retain power.

Italian Prime Minister Giuseppe Conte has arrived in the parliament's upper house, who will decide whether to give a boost of confidence to the current government after two ministers stepped down last week.

On Monday, the lower house of parliament, the Italian Chamber of Deputies, voted in favour of Giuseppe Conte's government.

Will #Italy's government fall in midst of a pandemic and economic crisis? Prime Minister @GiuseppeConteIT begins address to parliament before vote of confidence in lower house today & upper one tomorrow, after coalition partner @matteorenzi withdrew ministers. Likely to be close. pic.twitter.com/lq1rO2YyXL

"[A total of] 321 have voted for, 259 have voted against", Roberto Fico, the president of the chamber of deputies, announced.

The vote came after the government coalition was shaken as former Prime Minister Matteo Renzi's party Italia Viva withdrew last week in a spat over Conte's handling of the coronavirus and subsequent economic meltdown.

Last week, senator, former prime minister, and leader of the party Italia Viva, which until recently was part of the governing coalition, Matteo Renzi announced the resignation of two of his ministers from the Cabinet.

The move was a show of protest against the economic recovery plan, or National Recovery and Resilience Plan (PNRR) promoted by Conte and adopted earlier last week. The PNRR specifically determines how Italy is going to administer the funds it is due to receive from the EU.

Why Receiving Senate Support May Prove Tricky Task for Conte

The prime minister needs to secure at least 152 votes in the Senate in support of his government now that Italia Viva has already announced it will abstain from Tuesday's voting.

The party was followed by a spate of conservative and populist right-wing political forces, including the Brothers of Italy, Forza Italia, and Lega, who made it plain they would not cooperate with the centre-left government and called for new elections.

If Conte fails to win the confidence vote in the Senate, the chances of which will grow if Italia Viva actually decides to vote instead of abstaining, he will have to stand down. Under such a scenario, either a technical government or new elections would occur.

Shortly before Monday's vote, Conte underscored that his government had always tried to find the right approach and he was speaking on its behalf with his "head held high".

"[…] For my part, I can say that the government has worked with maximum care and attention to find delicate balances, including constitutional. If today I can speak on behalf of the whole government with my head held high, it is not because of the arrogance of a person who believes to have never made any mistakes, but because of the awareness of one who has worked with all physical and mental energies for the common good of the nation", he said.

The prime minister added that the government had always taken "the most justified decisions" during the COVID emergency.

Italian senator for life Liliana Segre has, meanwhile, signalled her readiness to vote for the coalition government led by Conte on Tuesday.

"I have decided to give my confidence [vote] to the government. I found this sudden political crisis completely incomprehensible", Segre told the newspaper Il Fatto Quotidiano in an interview.

The 90-year-old Holocaust survivor added she was frustrated about the current situation concerning the government.

This followed the Italian PM pointing out that he did not see any good reason for the current government crisis, which in fact put the future of the government coalition at the mercy of a parliamentary vote.

"For this crisis, I myself do not see any plausible foundation" at a moment when "the [COVID-19] pandemic is still in full course", Conte argued.

He added that the developments in Rome had resulted in "deep dismay" in the country, and that the focus should be placed on combating the coronavirus and rectifying the economic situation.

Italy Needs Fiscal Shock to Get Out of Debt Crisis, Tax Cuts Can Help – Senator