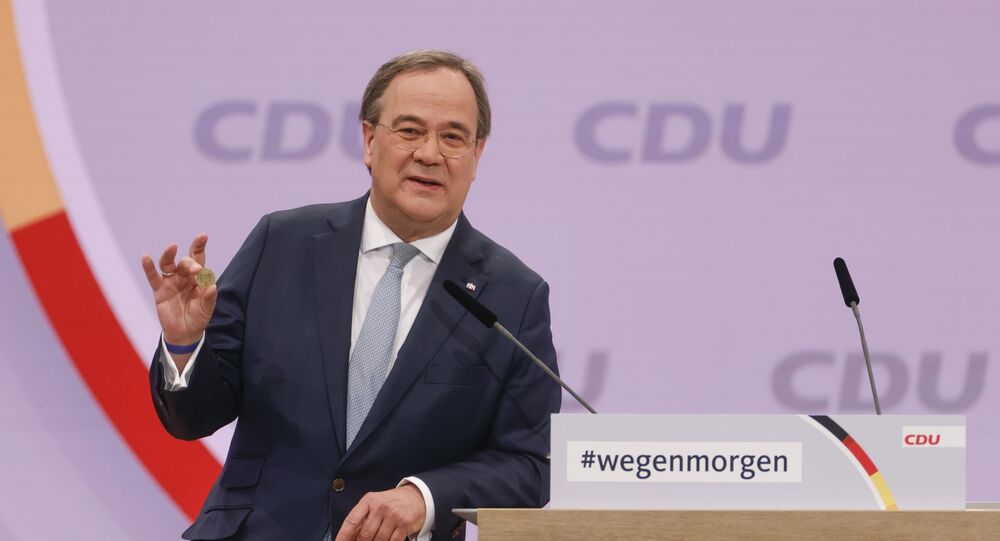 Earlier in the day, the CDU's online congress failed to choose a leader in the first round, when Laschet received 380 votes, followed by Friedrich Merz and Norbert Röttgen with 385 and 224 votes, respectively.

Laschet has been elected head of Germany’s ruling party after beating Merz in a runoff.

"Armin Laschet received 521 votes, Friedrich Merz got 466 votes. Thus, Armin Laschet has been elected, he received an absolute majority of votes", the CDU chairperson said, as broadcast by the N24 channel.

Laschet has replaced Annegret Kramp-Karrenbauer, who resigned as chairwoman of the conservative CDU early in 2020.

The party delegates gathered earlier on Saturday to elect a new leader – Laschet will now be the party's candidate for the chancellor's office in September’s general election.

Three people were vying for the position: business lobbyist Friedrich Merz, Armin Laschet, the premier of the North Rhine-Westphalia state, and the chairman of Bundestag's Foreign Affairs Committee, Norbert Rottgen.

At least 51 percent of the votes was required to win in the first round. No candidate won a majority, so the CDU voted in a runoff between the two strongest candidates, Laschet and Merz.

Angela Merkel headed the party until 2018, when she left the position while remaining chancellor of Germany, due to a rift with long-time CDU ally, the Christian Social Union (CSU) in Bavaria, over her government's migration policy.

Merkel has been Germany's chancellor since 2005 and is the longest-serving leader in the European Union.