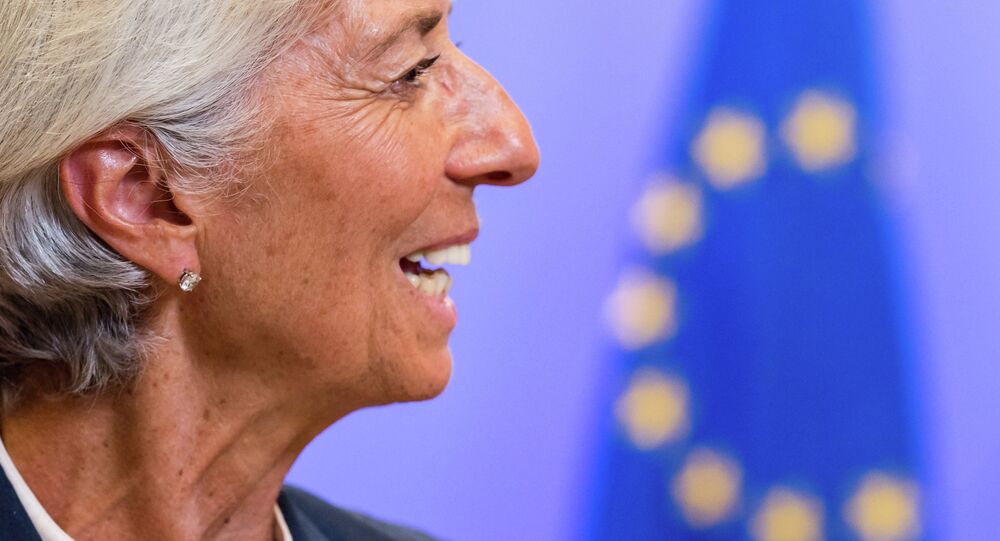 Europe's trajectory was more optimistic as several key programmes were being rolled out across the 27-member union, but outcomes depended on the efficacy of such initiatives and numerous potential disruptions, one of bloc's most central figures said at a key summit this week.

The outlook of the European Union was more optimistic as a rebound was predicted across the 27-member bloc, European Central Bank (ECB) president Christine Lagarde said at the Reuters NEXT summit on Wednesday.

When asked by Sputnik for an update on the ECB's Financial Stability Review in November, namely amid fresh vaccines rollouts, the emergence of mutant variants of COVID-19, the post-Brexit deal with the United Kingdom and others factors, Lagarde said numerous situations had been taken into account for the estimates.

"At the start of the uncertain items, we had issues like Brexit. Will it be resolved? Will it be hard or soft? What kind of arrangements will we have? We had obviously the outcome of the US elections and, more importantly, of the [US] Senate elections as well, and we had very little certainty about the approval of the various vaccines that would lead to vaccinations", Lagarde explained.

But she added more pessimistic outlooks had cleared over time, namely after Brexit had been resolved "at the very last hour", allowing greater clarity on the terms of trade as the situation evolved over the coming months.

© AFP 2020 / CHRISTOF STACHE
'New World Trade Order' Urgently Needed Amid Rise of New Technologies, China's Tech Market, CEO Says
Speaking on President-Elect Joe Biden, Mrs Lagarde explained he had been confirmed and a new Senate majority would "give a more stable political basis" to the incoming administration at the start of his term.

The race for a COVID-19 vaccine had been "laborious", but "initial steps" to order vaccines, build testing centres and others would expand the number of vaccines beyond the mRNA messenger base list to build herd immunity, she said.

"So, from that perspective, we start on a more positive basis than what some would like to look at, and furthermore, which was clearly unexpected when we went into that disastrous pandemic, the Europeans have demonstrated that, when the going gets tough, the tough Europeans can get together, hang together and produce results," she explained.

Speaking further with Alessandra Galloni, Reuters global managing editor, Mrs Lagarde said that health and vaccination rollouts would pose further uncertainty as concerns over efficiency, speed of deployment and European sentiment could not be determined, which would be "critically important" for economic development and forecasts.

Concerns over the rapid deployment of the European Commission's €750bn NextGenerationEU programme could affect outcomes for the central bank, she said, adding she hoped a rapid rollout would lead to recovery efforts.

"The next generation EU will have to be rolled out efficiently, rapidly and based on strategic plans, some of which have already been submitted. We know that roughly 11 European countries have already submitted their plans. They are being reviewed, assessed, there will be criticisms and shortfalls, but the work is ongoing, and hopefully the borrowing will start rapidly and payment to member-states to support their recovery efforts and stimulus will kickstart early on," Lagarde said.

ECB forecasts for 2021 stood at 3.9 percent but would move to 4.2 percent in 2022 and would later return to 2.1 percent in the Eurozone, with Eurozone COVID-19 lockdowns being accounted for in the assessments, she said, citing figures.

The forecasts were "predicated" on lockdown measures continuing up to the end of Q1 at the end of March, following plans from EU member-states such as Germany, Belgium, Austria, Spain, the Netherlands, France and others, she added.

© AP Photo / Jean-Francois Badias
Reuters NEXT Virtual Summit to Host Four-Day Panel Talks With Top Global Leaders in Gov't, Business
But further problems such as slow or inefficient vaccine programmes could affect assessments, she said, adding: "There is clearly a wrap of logistics [and] an impetus on vaccinations".

The ongoing Reuters NEXT summit is taking place from 11 to 14 January and joins 25,000 journalists, executives, professionals and world leaders to tackle global challenges in politics, tech, press freedom and business.

The four-day event is one of the largest in the world and includes speakers such as Chevron chief executive Mike Wirth, US economist Jeffrey Sachs, World Bank president David Malpass, Google chief executive Sundar Pichai and many others.