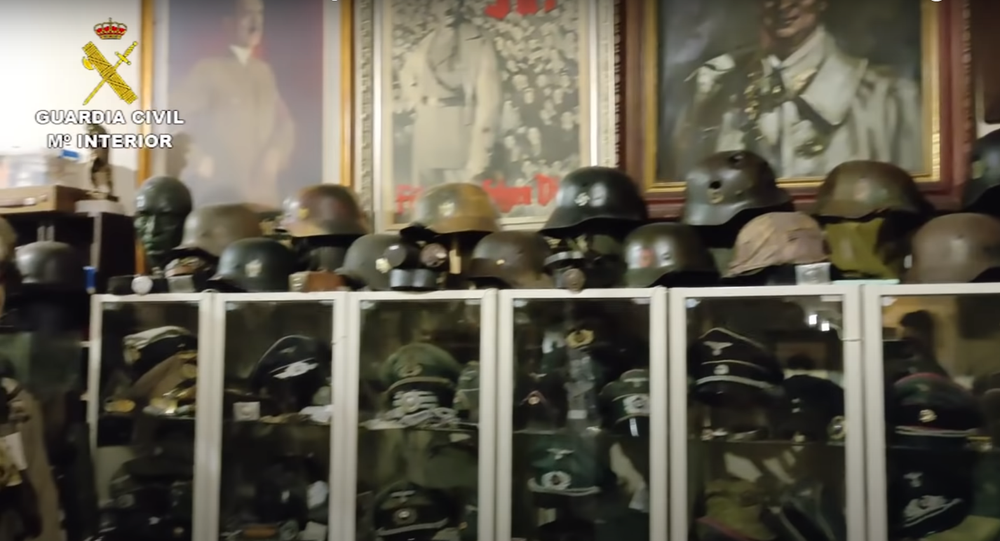 Spain did not take part in the Second World War, having faced a brutal civil war between 1936 and 1939. However, General Francisco Franco, the leader of the Nationalists, received support from Nazi Germany and fascist Italy during the conflict. Later, the Spanish Blue Division ‘volunteer’ unit was sent to the Eastern Front.

Spain’s Guardia Civil national police force has uncovered a massive collection of Nazi artefacts during an operation to detain a criminal gang involved in the trafficking of illegal firearms and drugs.

In a video posted on its official YouTube page, the Guardia Civil showed footage of officers rifling through bags containing guns, ammunition and passports.

The video goes on to reveal a room filled with Nazi German-era artefacts, ranging from Stahlhelm helmets and officers’ caps, to portraits and sculptures of Nazi officials, flags, banners and uniforms, as well as WWII-era vintage weapons and ammunition including the MP 40 submachine gun.

Three gang members – two German nationals and a Brit, were said to have been detained during the operation.

Their scheme reportedly included buying deactivated firearms from eastern Europe, modifying them illegally in their workshop and selling them to drug dealers in southern Spain. In the course of the bust, police were said to have uncovered 121 guns, 22 assault rifles and eight sub-machineguns, as well as nearly 10,000 rounds of ammunition of various calibres, plus an anti-tank grenade containing 1.5kg of military-grade explosive.

The stash of Nazi paraphernalia is thought to have belonged to one of the detained Germans, who was previously identified for his links with far-right and Nazi groups.

The British national reportedly acted as an intermediary between the Germans and drug traffickers in the Costa del Sol and Campo de Gibraltar.

The three men are charged with involvement in an organised criminal group, illegal trafficking of weapons, ammunition, narcotics and falsifying documents. The group operated in the region for more than three years before being detained.