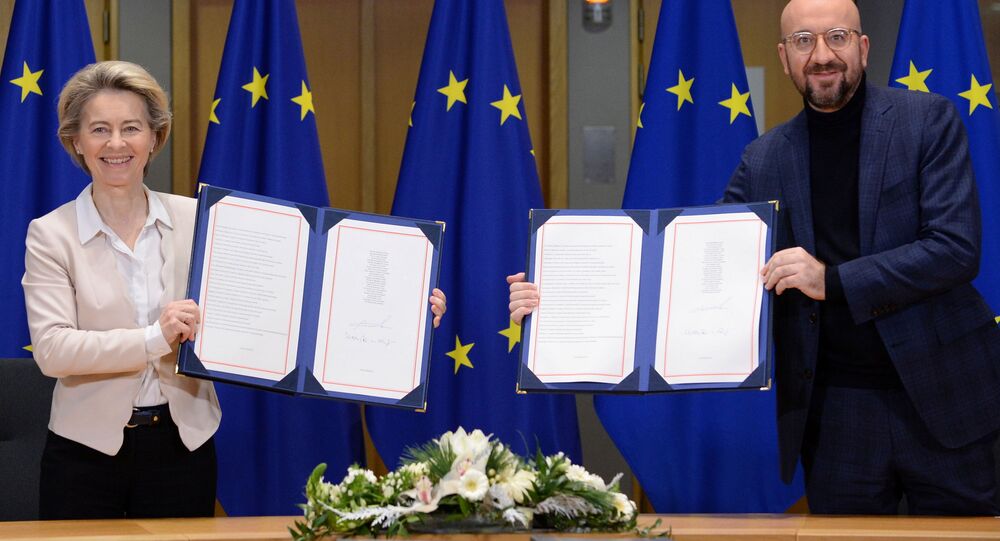 "The agreement that we signed today is the result of many months of intensive negotiations, during which the EU demonstrated an unprecedented level of unity. It is a fair and balanced agreement that fully protects the fundamental interests of the European Union and creates stability and predictability for citizens and companies", Charles Michel said.

The signing ceremony took place at the headquarters of the EU Council in Brussels.

Next, the documents will be flown to London for UK Prime Minister Boris Johnson to sign them.

As the new 🇪🇺🇬🇧 Agreement is signed, I want to thank all teams in @EU_Commission, UK Task Force, Council & @Europarl_EN for their commitment and trust over the past 4 years in this extraordinary negotiation.

Each person played their part in building European unity. Thank you!

"With this bill we are going to be a friendly neighbour, the best friend and ally the EU could have," he said.

The agreement is yet to be approved by EU member states and be ratified by the European Parliament and the UK parliament.​

The EU and the UK struck a post-Brexit trade agreement on 24 December, a week before the transition period expired.

UK Prime Minister Boris Johnson and European Commission President Ursula von der Leyen have both praised the agreement, calling it fair and balanced, although some observers have been keen to pass judgment on which party they think got the upper hand at the negotiating table.

The free trade deal is at the heart of the future relationship agreement concluded by negotiators from London and Brussels. UK exports to the EU totaled 294 billion pounds in 2019, accounting for 43 percent of the total value of exported goods from the United Kingdom, according to data published by the country's parliament.

The UK formally left the EU on 31 January.