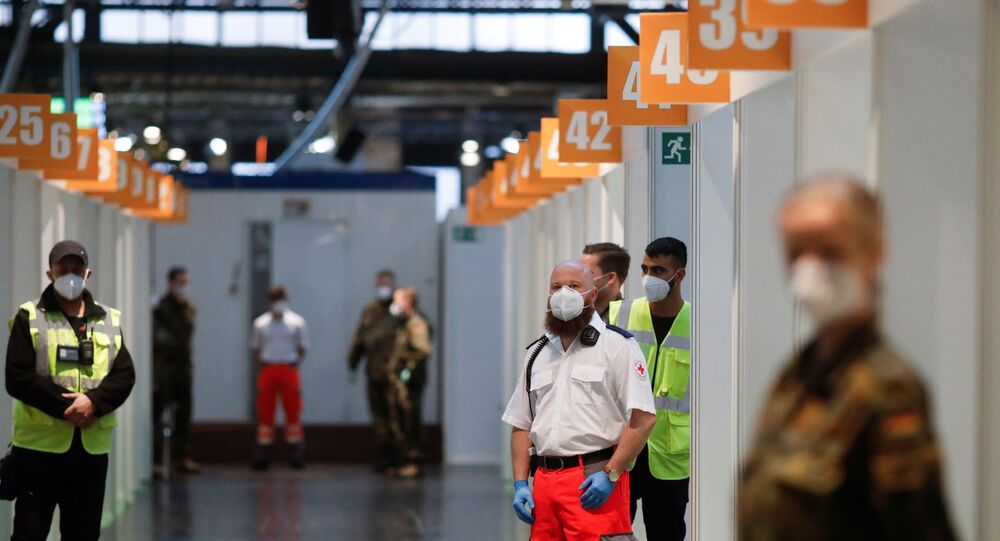 MOSCOW (Sputnik) - The European Union's member states on Sunday kicked off the bloc-wide immunisation against the coronavirus disease with the vaccine developed by the Pfizer and BioNTech pharmaceutical companies.

The campaign is being launched the next day after the EU nations received their first shipments of the vaccine following the European Commission's authorisation.

Italy, which was among the hardest-hit European countries, started off the campaign by first vaccinating three employees of the Lazzaro Spallanzani National Institute for Infectious Diseases in Rome, which treated the first COVID-19 patients back in January.

On the first day of the vaccination campaign, Italy will only immunise medical workers and hospital staff. Further vaccination of the EU population will begin in January.

Domenico Arcuri, the Special Commissioner for the COVID-19 Emergency, called the first vaccinations "symbolic" and compared them to the "rays of light after a long night."

Meanwhile, Spain's first person to receive the Pfizer/BioNTech shot was a 96-year-old resident of a nursing home.

"Very good, thanks", Araceli Rosario Hidalgo Sanchez said after getting the vaccine, as quoted by the TVE broadcaster, adding "let's see if we can get the virus to go away."

The vaccine was then administered to Monica Tapias, the nurse who has worked at the facility for 10 years. She admitted that she was honored to become one of the first ones to be vaccinated in the country.

Portugal's first COVID-19 shot was given to Antonio Sarmento, the director of the Infectious Diseases Service at the Sao Joao University Hospital Centre in the city of Porto.

Portuguese Health Minister Marta Temido, who was present during the country's first immunisation against COVID-19, called the moment ”full of symbolism and hope."

An 84-year-old woman was the first Austrian to receive the COVID-19 jab.

The campaign was launched at the Medical University of Vienna on Sunday morning. Five people in high-risk groups for COVID-19 and those over 80 years old agreed to be vaccinated first.

France was among the countries, which administered its first COVID-19 vaccine to a person over 60. As such, a 78-year-old woman received the nation's first shot in the ward of the Rene-Muret hospital in Sevran commune.

"No panic, I'm ready for the challenge", the woman said before the inoculation, as cited by the Le Parisien newspaper.

Later in the day, vaccines will be administered at the Hospital of Champmaillot in Dijon. According to French media, there will be around 20 more vaccinations done on Sunday.

Germany, like France and most other European countries, vaccinated the elderly and nursing home workers.

Although the first shot was received by a 101-year-old woman on Saturday, the vaccination campaign officially began on Sunday.

The first three patients who were administered the vaccine in Germany were over 100 years old. Citizens over 80, residents of nursing homes and their carers are the first priority vaccination group in Germany.

Elsewhere in Europe, the Czech Republic kicked off its immunisation programme by vaccinating its Prime Minister Andrej Babis at the Central Military Hospital in Prague and Health Minister Jan Blatny in the city of Brno. Babis' inoculation was broadcast live on Czech TV.

According to the Czech health authorities, 1.1 million people are expected to be vaccinated in the first quarter of 2021.

Lithuania, like many other countries, has given priority to medical staffers working in COVID-19 wards, emergency departments and intensive care units, according to the Lithuanian Health Ministry.

According to the Delfi portal, a nurse based at a Vilnius clinic became the first person in the country to receive the vaccine as the programme got underway.

The Baltic country is expected to receive its second batch of coronavirus vaccines on Tuesday and the third one in early January.

The vaccination campaign in bordering Poland began at the Interior Ministry's hospital in Warsaw, where a nurse and a physician were the first to receive the shots.

In total, about 300 people are planned to be vaccinated on the first day of immunisation in Poland. The authorities expect that by the end of December, about 300,000 doses of Pfizer vaccine will be delivered to Poland, which will allow the vaccination of 150,000 people.

Estonia, on its part, vaccinated Jelena Rozinko, a doctor from the Ida-Viru Central Hospital in the city of Kohtla-Jarve, according to the Postimees news portal.

"I am very grateful that I was chosen as the first recipient of the vaccine. I work here and every day I have contact with COVID-19 patients", Rozinko told the media outlet.

Cyprus has administered its first Pfizer/BioNTech vaccine to a doctor working in a nursing home in the city of Limassol.

"We believe in science. We believe in medicine. That is why I was vaccinated first", the doctor said on air the Cyprus Media broadcaster, expressing confidence that the vaccine was safe and urging others to get vaccinated to help end the pandemic faster.

Similarly, Greece prioritised its immunisation campaign for medical workers. A nurse from the Evaggelismos General Hospital in Athens was the first to receive the vaccine. Those present during the inoculation greeted the first vaccination with applause.

Franc Kramberger, the former archbishop of Maribor, became the first person in Slovenia to receive the Pfizer/BioNTech vaccine against COVID-19 on Sunday, the country's government said in a press release.

Maros Sefcovic, the Slovak-born vice-president of the European Commission, was vaccinated against the disease on Sunday.

​The president of Slovakia, Zuzana Caputova, was also vaccinated against COVID-19 on Sunday at a hospital in the country's capital, Bratislava. The event was broadcast on live television.