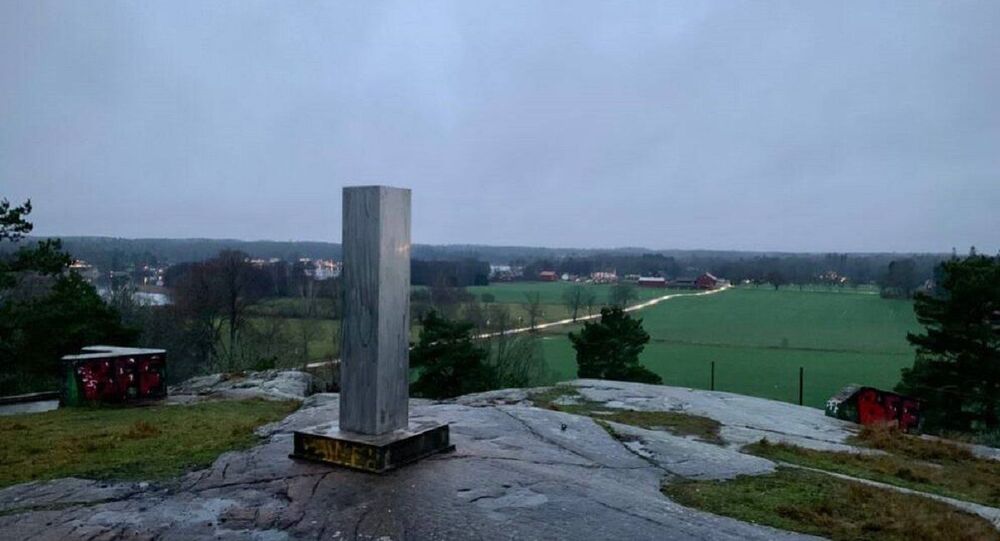 The first obelisk-like monument was found in the state of Utah earlier this year. Since then, similar works have been discovered in about thirty different places across the globe, sparking various theories about who is behind the trend.

A mysterious monolith has appeared on Gatstuberg hill outside Katrineholm in Södermanland County.

It is apparently made of sheet metal, hollow and just over two metres long, national broadcaster SVT reported.

"It looks almost a little creepy there at dusk. Not a human in the place but a tall steel statue stood there, completely unshakable. Makes you wonder, how it has been placed there", SVT correspondent Robin Persson said.

Like with its predecessors across the globe, it is unclear who manufactured the installation or set it up.

​Tweet: "The monoliths are here. Now an unknown monolith has been found on a hill in Katrineholm… Archive X-Files music is heard from somewhere".

Sweden's first mysterious monolith appeared last week outside Arboga, Västmanland County. Two days later, it disappeared without a trace, as is often the case with modern monoliths appearing around the globe. They are often made of steel or other metal and are driven into the ground like a spear. There are various theories about who is behind the monolith trend, from artists seeking to provoke debates to aliens.

Art critic Dennis Dahlqvist sees the pillars as a result of an ongoing new age trend.

"There is a craving for spirituality. The longing for something bigger and better is perhaps greater than ever, especially now with the pandemic", Dennis Dahlqvist told SVT.

According to him, the monolith in Katrineholm is a bit different from its peers from around the world.

"It stands on a mountain overlooking buildings. Unfortunately, you don't get the sharp contrast between nature and art, such as in Utah", he said.

The first obelisk-like monument was found in the state of Utah earlier this year. Since then, similar works have been discovered in about thirty different places around the world. The man-made objects appear in odd and often remote places, only to disappear without a trace within a few days.

'This is so Cringe': Netizens' Interest Wanes as Latest 'Mystery Monolith' Found in Spanish Ruins