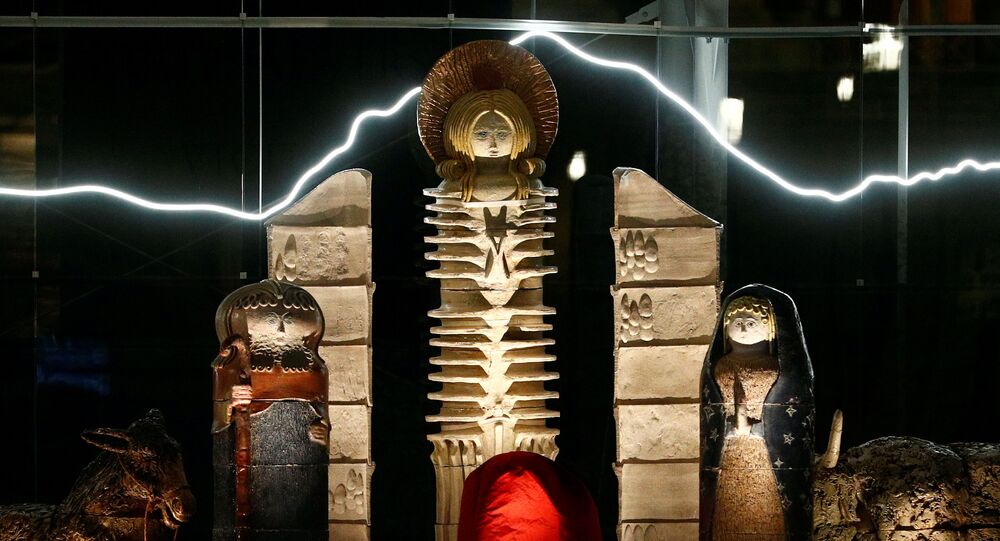 The scene's design led at least one social media user to wonder aloud whether the Pope is actually "just trolling Christianity".

A new nativity scene that has recently been unveiled at St. Peter's Square in the Vatican has attracted quite a lot of attention online already, but perhaps not of the kind its creators were hoping for.

As Reuters points out, the Vatican uses a different nativity scene each year, usually donated by towns or artists, with some of the previous scenes featuring elements such as "a broken boat representing the plight of refugees and a person visiting an inmate in a jail cell, symbolising charity".

This year's nativity scene made by students and teachers in Castelli, an Italian town famous for ceramics, includes an astronaut and "a character reminiscent of Darth Vader from Star Wars", and has apparently already garnered quite a few negative reviews from locals and social media users alike.

This year’s #Vatican Nativity scene, revealed tonight, comes from a town in the Abruzzi region of Italy famous for its ceramics. Its creators say it’s meant to have a contemporary and unconventional look influenced by ancient Greek, Sumerian and Egyptian art. Photo: @dibanezgut pic.twitter.com/ozEeaQWJ6r

​"With this global pandemic and everything else the Christian people, or anyone for that matter, was expecting a sign of rebirth," Alfredo Chiarelli, 65, who has been selling religious items in the square for 30 years, said as quoted by the media outlet. "It has confused and saddened a lot of people."

Many netizens also didn't seem to think highly of the display in question, some even suggesting that it should be taken down.

This is this year’s Vatican nativity scene and it needs to be destroyed. I’m not even kidding. A few men with sledgehammers should do the trick. We have to stop passively putting up with these insults to the faith and Catholic sensibilities. pic.twitter.com/H3XGVdHw6a

This monstrosity is the Vatican’s nativity scene. Nothing like ugly robot space aliens to undermine the beauty & humanity of the Holy Family at Christmas time, during a pandemic when we need our timeless Church traditions more than ever. Thanks, Pope Francis! pic.twitter.com/6YMSE4TbTy

Just when you thought 2020 couldn't get any more depressing. Behold the new Vatican nativity scene. pic.twitter.com/obI8rrWFEg

At least one netizen even wondered aloud whether the Pope is "just trolling Christianity".

Is @Pontifex just trolling Catholic Christianity? This is the derpiest thing I’ve ever seen. 😕 #VaticanNativity pic.twitter.com/nDsptAaOvq

​And there were also those who started cracking jokes about what kind of nativity scene will be unveiled in the Vatican in 2021.

The 2021 Vatican Nativity just leaked and it's beautiful pic.twitter.com/hiqlpAT0Kv