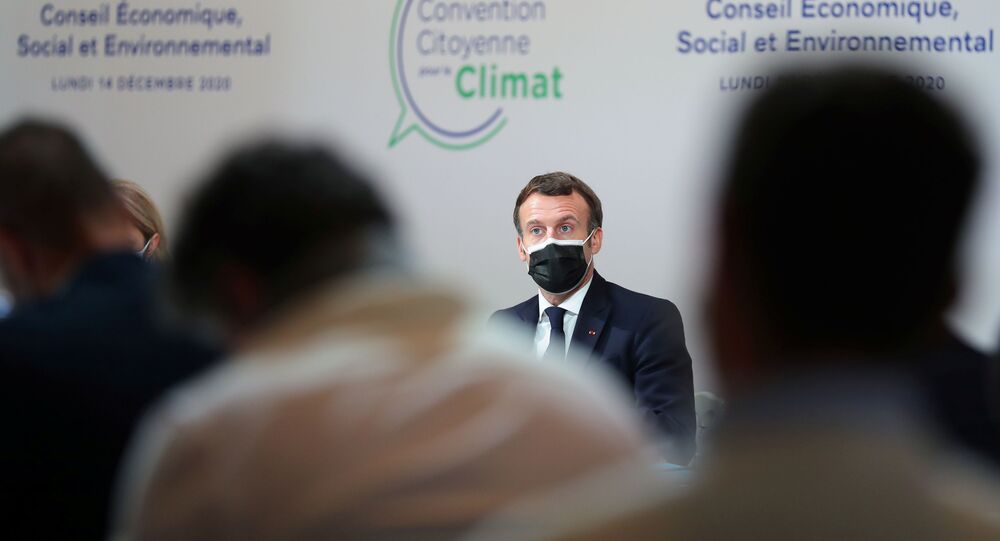 On Friday, the European Union leaders agreed on so-called Green Deal, proposed by the president of the European Commission, Ursula von der Leyen, one year ago. The deal implies the reduction of the greenhouse gases produced within the bloc to between 40% and 55% of their 1990 levels by 2030.

French President Emmanuel Macron has announced a referendum on the ammendments to the country's Constitution, adding the fight against climate change and the necessity to preserve the environment into it, the Associated Press reported on Monday.

According to the report, at a meeting with climate activists (members of a Citizen's Convention on Climate), Macron said that the referendum proposal would need to be approved by both chambers of the French parliament, the Senate and the National Assembly.

The French president reportedly acknowledged that France was not doing enough to be in line with its commitments on climate, which are aimed at constraining global warming. France is not taking sufficient-enough measures to meet targets set under the 2015 Paris Agreement, he said. The country has delayed most of its efforts until after 2020.

"Should we do more? Yes," Macron said in four-hour discussions with a panel of dozens of French citizens. "We need to keep moving forward, and that work is even more urgent".

According to some expert views, although Macron and others EU leaders agreed on Friday to raise the ambitious bar of continent’s 2030 goal to reduce greenhouse gas emissions to 55% or less of their 1990 levels (previously it was 40%), meeting this goal in the current economic situation is likely to be difficult.

Earlier, the projected future president of the US, Joe Biden, said his administration would rejoin the Paris climate accord on the first day of his presidency, as world leaders celebrated its fifth anniversary.

The last referendum in France was held in 2005, during the presidency of Jacques Chirac, asking the people to support the creation of the European Constitution. The voters said no to the proposal.