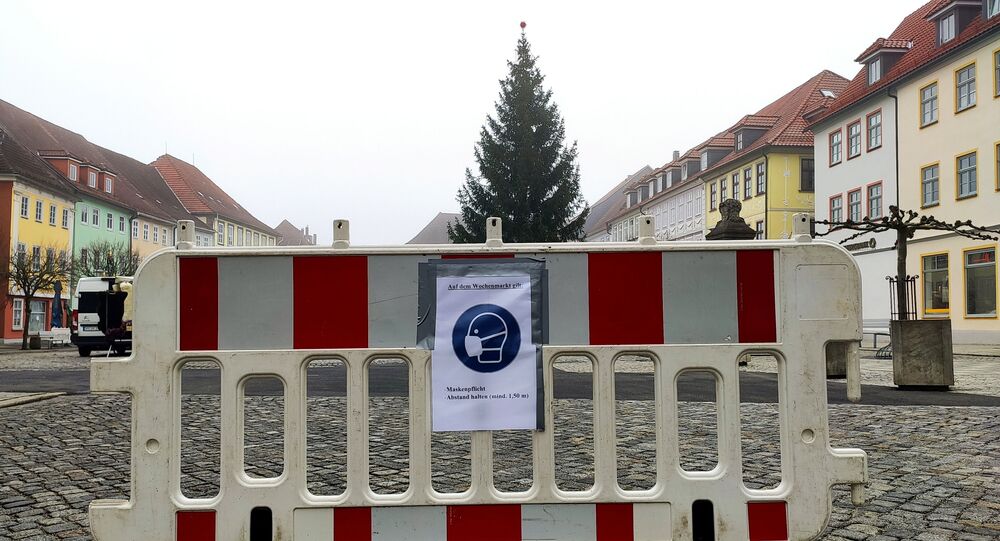 Germany to Introduce Stricter Lockdown Measures Ahead of Christmas Season

The country has been in partial lockdown for six weeks, with bars and restaurants closed, while stores and schools have remained open. While the COVID-19 cases continue to rise, some regions have imposed tougher measures to curb the infection.

Authorities in Germany have agreed on toughening the anti-COVID restrictions ahead of the Christmas season from 16 December until January 10, banning all non-essential businesses and shutting alcohol consumption in public sites.

"We agreed that regional provisions [on the toughening of restrictions] will be in effect until January 10. With regard to contact restrictions, gatherings are allowed among up to five people belonging to two households. Exemptions will apply from December 24-26, but not for the New Year's," German Chancellor Angela Merkel said on Sunday following consultations with German state leaders.

The German authorities banned the sale and consumption of alcohol and food in public places, such as traditional Christmas markets where Germans usually gather this time of year to enjoy beer, mulled wine and a variety of snacks.

“I would have wished for lighter measures. But due to Christmas shopping, the number of social contacts has risen considerably,” Merkel said, as quoted by CNBC News.

© REUTERS / HANNIBAL HANSCHKE
Germany May Receive 7Mln Doses of COVID-19 Vaccine in Q1 2021, Merkel Says
Private meetings will be still limited to no more than five people from two households. But for the Christmas holidays, the restrictions will be eased slightly so families can celebrate together.

Only essential shops such as supermarkets, pharmacies and banks are to remain open from 16 December. Hair salons, beauty salons and tattoo parlours will also have to close.

“There is an urgent need for action,” Merkel told a news conference, warning of increasing pressure on the nation’s health system, according to the report. “We have seen rising infections and exponential growth in recent days and that means that we have to grieve many dead.”

Schools will also have to close, while employers are asked to stop operations or have employees work from home. The sale of fireworks will be restricted ahead of New Year’s Eve.

″‘Lockdown light’ has had an impact, but it was not sufficient,” Bavaria’s prime minister Markus Soeder said. “The situation is out of control.”

Finance Minister Olaf Scholz said that the government will support affected businesses with a total of around 11 billion euros ($13.3 billion) per month. Businesses that are forced to close their operations may receive up to 90% of fixed costs, or up to 500,000 euros ($605,000) a month.

As of 13 December, Germany has registered over 1.3 million COVID-19 cases. A total of 22,257 patients have died from the disease.