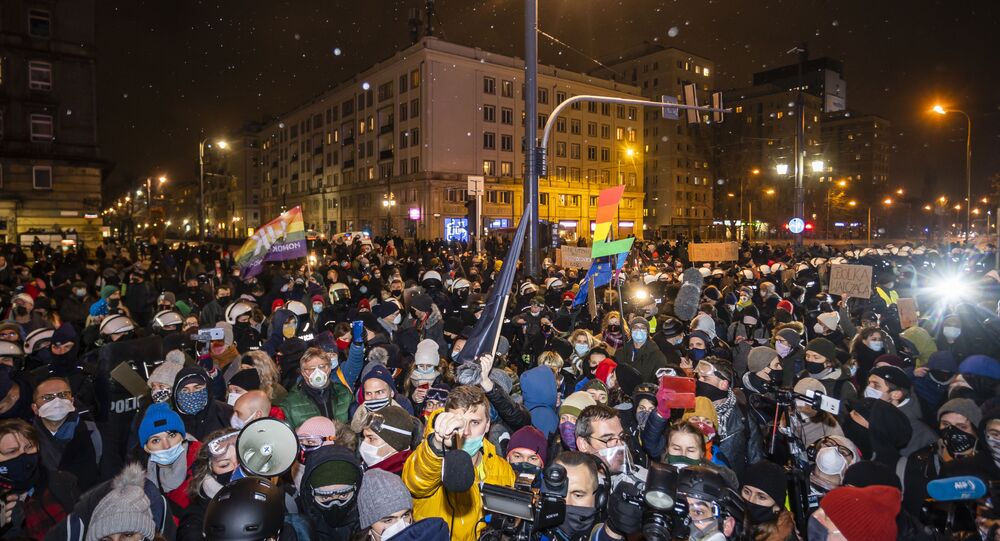 WARSAW (Sputnik) - Opponents of a Polish legal ruling that has imposed tougher restrictions on abortion are staging an anti-government protest in the capital city, Warsaw, a Sputnik correspondent at the scene reported on Sunday.

The protest was organized by the All-Poland Women's Strike social movement, which was established in 2016 and has regularly held demonstrations in support of women's rights.

During Sunday's protests, the organizers of the demonstration commemorated the 39th anniversary of the introduction of martial law in Poland in 1981 following widespread public unrest.

"On this day, we are pushing for freedom. The authorities have not yet learned that any form of oppression generates resistance," the organizers said in a statement.

Photos and videos from the protest have emerged online.

Protests against the new Abortion law in Warsaw!
The women and children will suffer the most- especially the poorest .#Warszawa pic.twitter.com/aGCrEs4bq1

​In total, thousands of people gathered near the Roman Dmowski monument in central Warsaw to take part in the demonstration. Protesters have also blocked several major thoroughfares in the Polish capital, despite orders from law enforcement officers not to do so.

Police have ordered the protesters to leave the area, although law enforcement officers have yet to forcibly disperse demonstrators.

Following the ruling, women in Poland will only be able to legally terminate a pregnancy if they can demonstrate the fetus was conceived as a result of rape, or if the pregnancy poses a threat to the woman's life or long-term health.