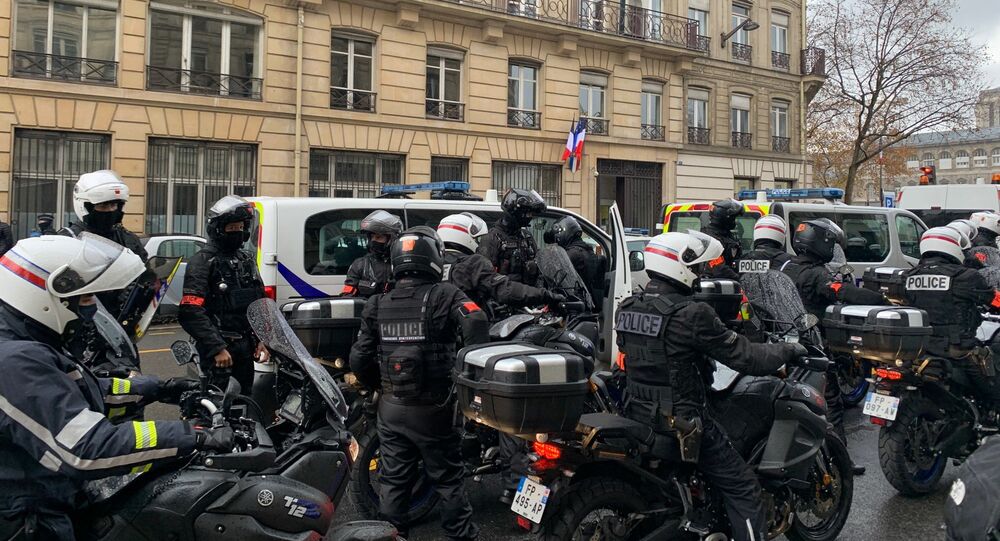 Police Use Water Cannon Against Protesters in Paris, Over 100 People Detained

PARIS, (Sputnik) - Police in Paris have used a water cannon to disperse protesters on Saturday as rioters started to throw bottles and firecrackers at officers, a Sputnik correspondent reported from the scene.

Earlier in the day, the fourth protest rally against the global security law started in Paris.

Protesters have reached the Republic Square located in the center of the city, with rioters throwing bottles and firecrackers at police officers.

The police repeatedly used a water cannon to disperse the mob.

During the previous protest rally, held in Paris on December 5, 67 police officers and gendarmes were injured and 95 people were detained.

© AFP 2020 / THOMAS COEX
Picture taken on December 5, 2020 shows French police officers BRAV-M stand in the street during a demonstration for 'social rights' and against the 'global security' draft law, which Article 24 would criminalise the publication of images of on-duty police officers with the intent of harming their 'physical or psychological integrity', in Paris.

Mass rallies in Paris and other French cities continue for the second week after the adoption of the controversial security bill criminalizing the display and distribution of images of police officers by the French parliament's lower house last month. The bill entails one-year imprisonment and a fine of 45,000 euros ($54,000) in punishment for the distribution of images of police officers and gendarmes that can potentially lead to their physical and psychological harm.

Critics of the global security law have said say it may hamper the functions of mass media to cover protests and inform the French population, while also violating freedom of expression. The supporters, on the other hand, claim its main purpose is to provide more protection to security forces, which have been subjected to a series of violent acts over the past months, including an attack on a police unit in the Paris suburb of Champigny-Sur-Marne in mid-October, which prompted protests by police officers demanding better protection from the state.