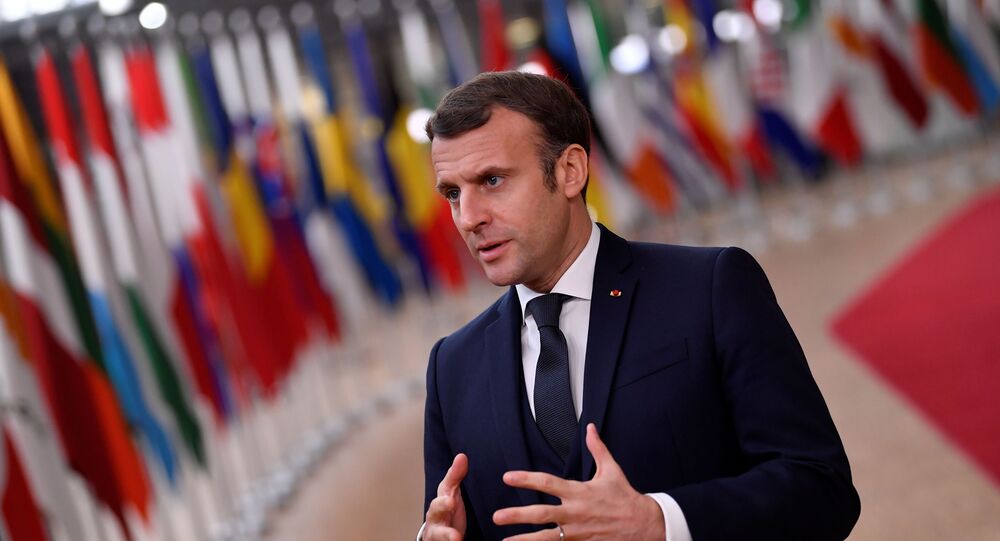 Macron on Turkey: EU Countries' Sovereignty Must Be Defended

EU states have repeatedly criticised Turkey over its attempts to unilaterally start oil drilling operations in Cyprus’ off-shore regions, which Ankara resumed in August 2020. Turkey insists that it has a right to survey for and extract resources in the area, which it deems as its Exclusive Economic Zone.

French President Emmanuel Macron has called on other European Union states upon arriving for an EU summit in Brussels to defend their sovereignty in the face of actions of Turkey.

"We are going to have an important discussion in regards to relations with Turkey. Paris intends to adhere to a clear position – we must follow the decisions made in October. We have to defend the sovereignty of the EU states and the stability in the Eastern Mediterranean", Macron said.

Macron made a similar call to the other members of the bloc on 20 August 2020 in light of Ankara's decision to resume geological surveys of Cyprus' off-shore waters in search for oil fields suitable for drilling. The French president said the EU would not tolerate attacks on the sovereignty of member states after Turkey defied demands to cease its activities in the Eastern Mediterranean.

"We would like to preserve the European sovereignty in the Eastern Mediterranean. Germany and France share solidarity with Greece and Cyprus, but at the same time we want to ensure the stability of the region", Macron said on 20 August.

During an EU summit on 1 October, members of the bloc agreed to review the actions of Turkey in the Eastern Mediterranean region again in December and threatened to impose sanctions against Ankara should it not cease its "provocations". The EU has also offered to establish closer trade relations with Turkey, as well as in other areas, in exchange for de-escalation in the region.

The Turkish Foreign Ministry stated that some parts of the EU October summit's decisions are "divorced from realities" and expressed concern over the bloc's threats of sanctions. The ministry insisted that it was not "constructive" to threaten Turkey with sanctions over what it called defence of the rights of Turkish Cypriots.

Turkey considers certain parts of Cyprus’ off-shore waters to be the Exclusive Economic Zone of the Turkish Republic of Northern Cyprus and thus insists on having a right to explore resources in these waters. These areas overlap with the territorial claims of the Republic of Cyprus, something which has resulted in several conflicts between Turkey, Cyprus, and Greece in the past.