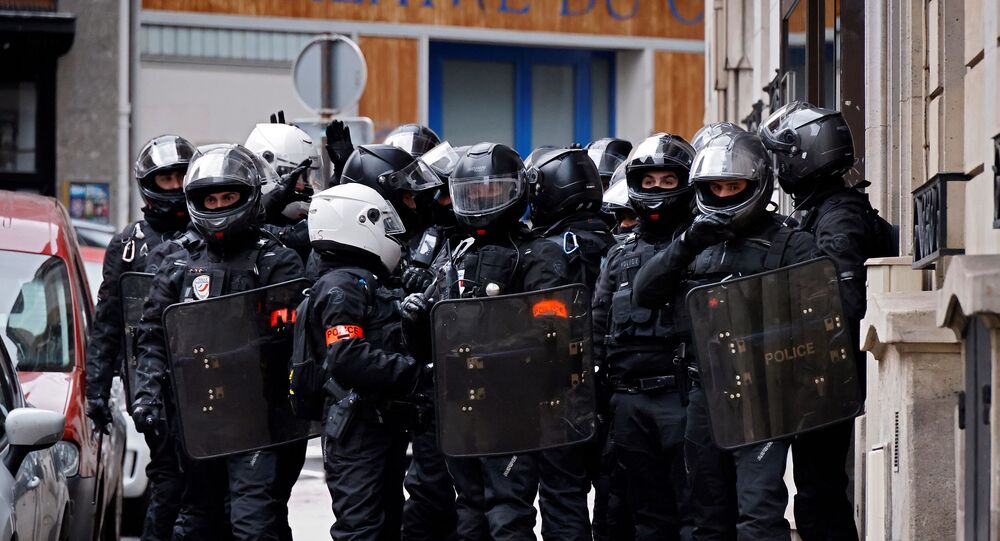 MOSCOW (Sputnik) - French Interior Minister Gerald Darmanin has reiterated his support for the national security forces and said it was further justified, after controversial photos by the AFP news agency capturing a policeman on fire during the nationwide violent protests sparked a nationwide debate.

During the riots against the state security bill on Saturday, a photographer from the news agency took photos of a group of police officers mobilised to curb the protests. The pictures showed one of the officers seemingly engulfed in flames. The images were used by a police union to denounce demonstrators. However, the incident was then clarified by other journalists who uploaded videos of the scene, taken from other angles, which showed that an incendiary device thrown at a group of enforcement troops by protesters landed close to them and did not burn any of the policemen. Nonetheless, the minister joined the condemnations of the violence against the police.

"The disastrous attempt to relativize the attacks on the police with these 'debates' following the publication of the AFP photo reveals an unbearable inversion of values. It justifies all the more support for our police forces," Darmanin wrote on Twitter late on Sunday.

​The opposite side of the story, implying that the police officer was not injured and burned, was also confirmed to the France Info broadcaster by the Paris police prefecture. In addition, an AFP photographer who captured the controversial moment said that the policeman was not on fire.

The nationwide unrest in France over the security law draft criminalizing the display of images of police officers has escalated into violent clashes between the protesters and police for the second weekend. It resulted in 95 arrests and 67 injured policemen, including 48 in the French capital, according to Darmanin. The clashes with police in Paris were accompanied by numerous acts of vandalism, with cars set on fire, windows being smashed and surveillance cameras dismantled.

In the meantime, the French Parliament's lower house has admitted that the controversial Article 24 of the bill, which entails one-year imprisonment and a fine of 45,000 euros ($54,000) for the distribution of images and video showing security troops that can potentially lead to their physical and psychological harm, could be revised. The legislation is due for a hearing in the upper house next month.