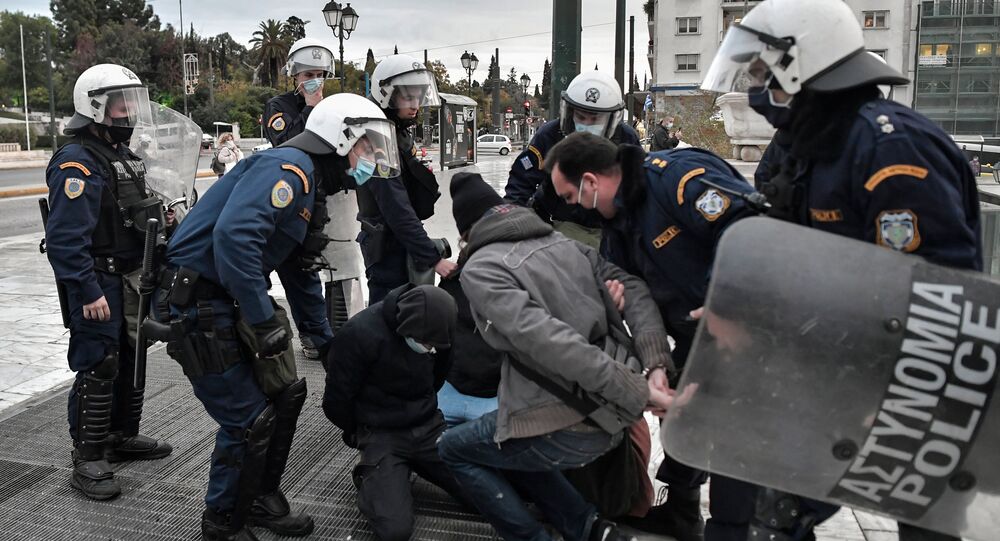 ATHENS (Sputnik) - The Greek police detained 374 people in the capital of Athens during the protests marking the anniversary of the 2008 police killing of teenager Alexis Grigoropoulos, with 135 protesters having been arrested over violation of coronavirus-related restrictions, local news agency AMNA reported on Monday.

The media outlet said that the majority of the detentions were carried out in the central Athens neighborhood of Exarchia, where Grigoropoulos had been shot dead, adding that the protests were attended by many members of the anarchist organizations based in the neighborhood.

According to the Proto Thema newspaper, the police also detained two lawyers who had arrived in Exarchia to fulfill their professional duty. The lawyers were released soon after but received punishment for the violation of the coronavirus-related restrictions.

The Athens Bar Association condemned the incident as "an unprecedented action," stressing that the police had prevented the lawyers from carrying out their duty.

On Sunday, the Athens Police denied access to the site of Grigoropoulos's murder.

On Saturday, the Hellenic Police announced a ban on protests ahead of the notorious murder's anniversary, citing coronavirus-related restrictions on mass events. The Greek opposition decried the ban, accusing the government of abusing COVID-19 to limit citizens' rights and freedoms.

Meanwhile, a German couple who brought flowers to the site were seen being detained by the security forces. The police officer carrying out the arrest did not specify a reason or introduce himself, even though the woman was speaking Greek to him. He forced the couple into a police vehicle amid journalists' comments that his actions were illegal. The police said the investigation into the incident had been initiated.

Grigoropoulos, who was 15 at the time, was shot dead by a police officer who was responding to a disturbance in Athens. His death prompted numerous weeks of riots across Greece, and citizens have gathered each year on December 6 to mark the anniversary of the incident. In 2019, roughly 80 people were detained as demonstrations to mark Grigoropoulos's death turned violent. Three police officers sustained injuries during clashes with protesters.